'Your voices are being heard': Calls for equality at BET Awards

The BET Awards aired on Sunday night was a platform for the voices of Black entertainers who echoed those members of their community protesting on the streets, with powerful messages delivered throughout the night.

Beyonce, accepting the humanitarian award, said: "Your voices are being heard and you're proving to our ancestors that their struggles were not in vain".

Beyonce was honoured for her philanthropic work and relief efforts during the COVID-19 crisis. She said voting in the upcoming election was the way to end a "racist and unequal system" in the United States.

The singer dedicated her award to the Black Lives Matter movement, and encouraged activists to continue to push forward.

The awards, given by the Black Entertainment Television (BET) network, celebrated BET's 20 years of highlighting excellence in Black-led entertainment. But the ceremony, filmed virtually because of the coronavirus pandemic, kept much of its focus on topics such as systematic racism and equal rights.

Rapper DaBaby began his video performance by laying on the pavement while an actor playing a police officer pressed his knee on his neck.

The reenactment at the beginning of the multi-platinum rapper's performance offered a glimpse into the last moments of the life of George Floyd, killed by Minneapolis police last month.

DaBaby rapped a verse from the Black Lives Matter remix of his hit song Rockstar with Roddy Ricch at the awards. 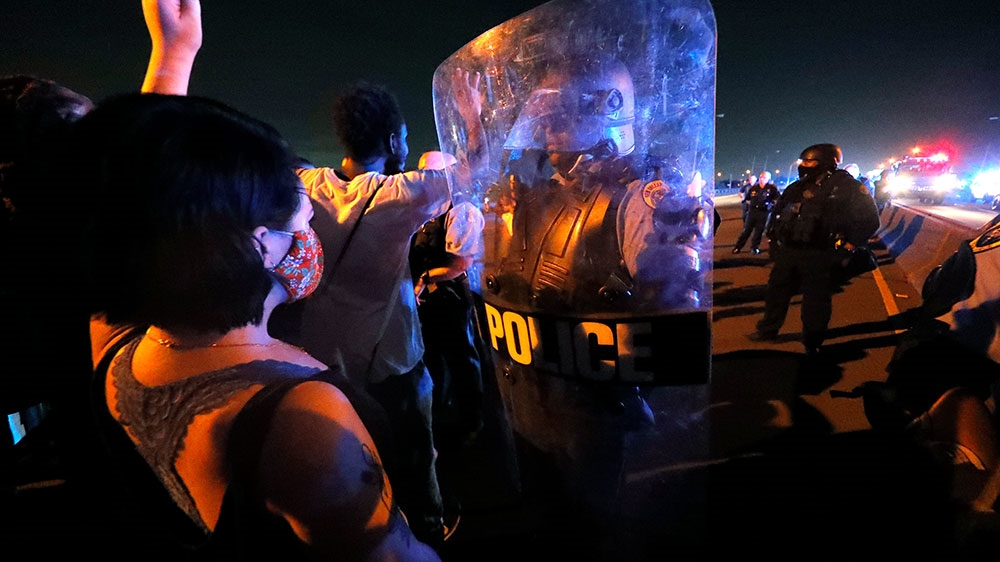 A protester stands in front of New Orleans, Louisana, police in riot gear as protesters marched on the elevated Interstate 10 highway, protesting the death of George Floyd [Gerald Herbert/AP Photo]

While holding a baseball bat, DaBaby then stood on a stage behind a group of people who had their fists raised high while others held  Black Lives Matter signs.

His performance also featured images from protests, a reflection of the current world in the wake of Floyd's death and the deaths of others, including Breonna Taylor and Ahmaud Arbery.

It didn't take long for host Amanda Seales to touch on equal rights for African Americans.

In a stirring monologue, Seales said she was chosen to host the show because she's been "telling y'all everybody's racist". She touched on several topics including the death of Breonna Taylor and racial equality.

Seales joked she would rather talk about issues other than race, but "racism always beats me to it".

Her monologue came after an all-star performance of Public Enemy's 1989 anthem Fight the Power. The performance featured group members Chuck D and Flavor Flav along with Nas, Black Thought, Rapsody and YG - who added lyrics to the song and name-dropped Taylor.

During the performance, video clips were shown of the national protests over the deaths of unarmed Black people including Floyd, Arbery and Taylor.

The 12-year-old sensation Keedron Bryant also performed in a cappella I Just Wanna Live, a song about being a young Black man that earned him a record deal.

Though the BET Awards are technically about handing out trophies, the awards were an afterthought. During the live telecast, Ricch won album of the year for his debut Please Excuse Me for Being Antisocial; Lizzo was named best female R&B/pop artist; and Burna Boy won best international act.