The world’s oldest person, a 118-year-old Japanese woman, has decided not to take part in the torch relay for the Tokyo 2020 Olympics because of concerns about the coronavirus, an official at her nursing home said on Wednesday, casting more shadows over an event, which is already facing significant hurdles including a possible lockdown extension.

Kane Tanaka, who is named in the Guinness World Records, was slated to be one of the relay participants in Fukuoka in southern Japan, which will start on May 11, the official said.

“We received an email from her family which said she wanted to withdraw from the relay as she and her family were concerned about spreading the virus at the nursing home,” they said.

The Olympic torch relay, which kicked off in March, has been undermined by the surge in coronavirus in Japan, which has led to restrictions being imposed in major cities including Tokyo and Osaka.

Six people who helped with the torch relay were diagnosed with COVID-19, the Tokyo 2020 organisers said on Sunday, bringing the total number of cases involved in the event to eight.

Some celebrities who were due to take part have withdrawn from the relay due to safety reasons.

The government is considering an extension to state of emergency of measures first announced last month, the Yomiuri Newspaper reported on Wednesday.

According to the report, officials were leaning towards an extension of the measures in Tokyo, Osaka, Kyoto and Hyogo prefectures beyond May 11.

With the continuing surge in cases, Osaka Governor Yoshimura Hirofumi cast doubt on Tuesday that a state of emergency in the western prefecture could be ended.

Daily cases also remain high in Tokyo with 609 infections reported on Tuesday. At least 65 of the patients are said to be in a serious condition.

Extending the measures, which were imposed on April 25, is likely to further fan doubts about whether the Games, scheduled to begin on July 23, can still go ahead as planned.

The games have already been delayed by a year as a result of the pandemic. 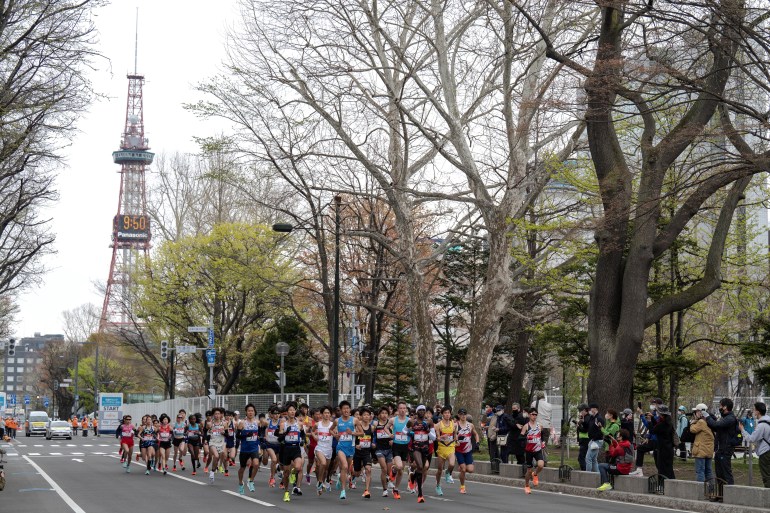 Athletes compete at the half-marathon race which doubles as a test event for the 2020 Tokyo Olympics, in Sapporo, Japan on Wednesday [Charly Triballeau/Reuters]Japanese Prime Minister Yoshihide Suga will meet senior government ministers on Wednesday to discuss an extension, the Yomiuri reported without citing sources.

It did not detail how long an extension might be, but the governor of Osaka Prefecture said an extension of three weeks to a month may be necessary, according to other domestic media.

Calls by Reuters news agency to Suga’s office were not answered. Japan’s government buildings and financial markets were closed on Wednesday for annual Golden Week holidays.

Under the state of emergency in Tokyo and other urban areas, the government has required restaurants, bars, and karaoke parlours serving alcohol to shut.

Large department stores and cinemas have also been closed and spectators banned from big sporting events.