Women rally across the world despite coronavirus restrictions

Thousands of women across the globe took part in annual marches and protests to mark International Women’s Day, in a muted affair due to restrictions on large gatherings as a result of the coronavirus pandemic.

From India to the Philippines to Spain, women called for equal rights and freedoms and an end to violence against women.

The protesters chanted “stop the genocide” and “close the camps” as they marched within a few hundred metres of China’s walled-off consulate in Turkey’s largest city, Istanbul. 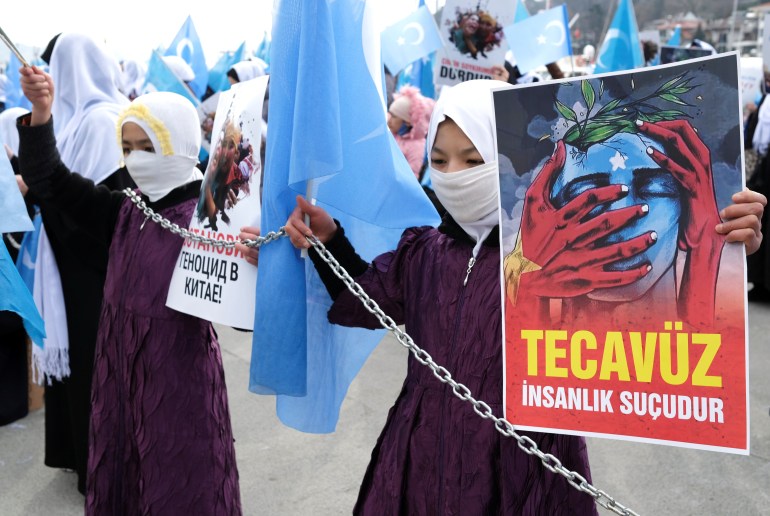 An Ethnic Uighur demonstrator holding a placard reading ‘rape is a crime of humanity’ takes part in a gathering on the occasion of International Women’s Day to protest China’s treatment of Uighurs, in Istanbul, Turkey [Murad Sezer/Reuters]Rights groups believe at least one million Uighurs and other mostly Muslim minorities have been imprisoned in camps spread out across the vast northwestern region.

In the Philippines, hundreds of mostly female demonstrators rallied in the capital Manila and took aim at the country’s president, Rodrigo Duterte, for alleged rights abuses against women.

We are facing a virus far deadlier than COVID and it is the rotten, anti-people, pro-foreign interest, and macho-fascist presidency

Protesters smashed an effigy of Duterte with sledgehammers during a demonstration near his residence in Manila during which women’s rights activists denounced him for what they called abusive security policies.

“We are facing a virus far deadlier than COVID and it is the rotten, anti-people, pro-foreign interest, and macho-fascist presidency,” said Joms Salvador, secretary general of Gabriela, a prominent women’s organisation in the Philippines.

Since taking office in 2016, Duterte has infuriated women’s groups, who call him a misogynist after he made jokes about rape on several occasions.

In India, thousands of female farmers held sit-ins and took part in a hunger strike in the capital as they protested the new agricultural laws.

The demonstrations were held at multiple sites on the fringes of New Delhi where tens of thousands of farmers have camped for more than three months to protest against the laws they say will leave them poorer and at the mercy of big corporations. Prime Minister Narendra Modi’s government says the laws are necessary to modernise agriculture.

About 100 women wearing yellow and green scarves sat cross-legged in front of a makeshift stage in Ghazipur, one of the many protest sites.  At least 17 took part in a day-long hunger strike. 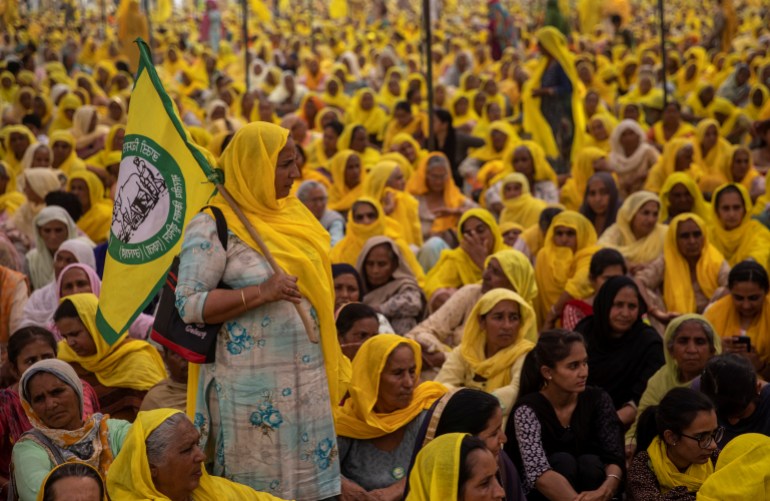 Female farmers attend a protest against farm laws on the occasion of International Women’s Day at Bahadurgar near Haryana-Delhi border, India, March 8, 2021 [Danish Siddiqui/Reuters]In neighbouring Pakistan, thousands of women rallied across the country. Equal rights, freedom for adults to choose their life partner, an end to forced marriages in the name of culture and religion, and an end to sexual harassment were among the demands of the marchers.

The Aurat March or Women’s March was founded in the South Asian country in 2018 when women from different walks of life marched through Pakistan’s port city of Karachi demanding equal rights. Since then, there have been annual demonstrations in major cities.

In Spain, more than 100 protesters defied a court order prohibiting protests by gathering – while staying at a distance from each other – in Madrid’s Puerta del Sol central square. They shouted “Enough with patriarchal justice!” and held banners against fascism and calling for an end to violence and repression against women.

“Spain can’t continue to be built with women in the margins, with a few that break glass ceilings while the most vulnerable continue on sticky floors,” said Equality Minister Irene Montero. Female police officers escort activists of the Aurat March during a rally to mark International Women’s Day in Islamabad on March 8, 2021 [Aamir Qureshi/AFP] Women at the negotiating table

A poll by Gallup has found that despite recent high-profile appointments of women globally, wider progress towards equality in political representation and other key areas is faltering.

Data from the UN Women agency showed women serve as heads of state or government in only 22 countries, with 119 nations never having had a female leader.

Fawzia Koofi, a negotiator in the intra-Afghan talks between the government and the Taliban and a member of the Movement for Change party, told Al Jazeera that in Afghanistan women were not regarded as influential citizens who could change the dynamics of war.

“More than four decades of war on Afghanistan, unfortunately, has taken many things from women – not only their lives and the lives of their loved ones but also opportunities: education, access to jobs, and access to resources,” she told Al Jazeera.

“Therefore, these peace talks are about women. And we have had to struggle to ensure that women are on the negotiating table. They represent the transformed Afghanistan.” 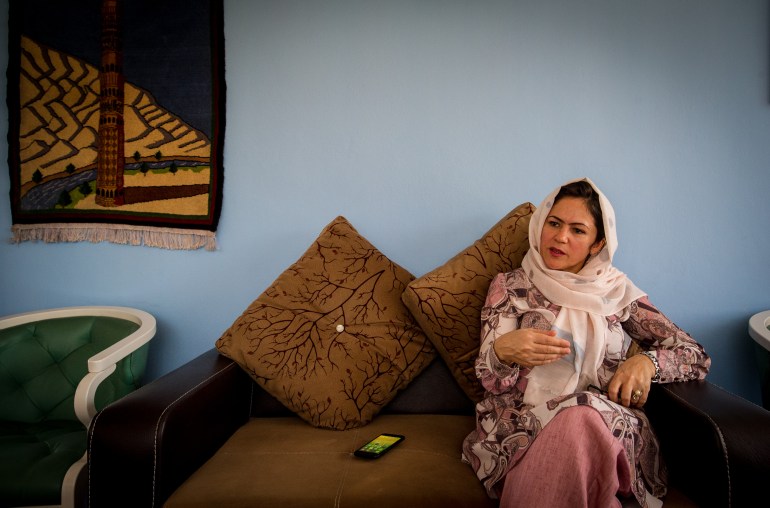 Fawzia Koofi, an Afghan politician, speaks from her office in Kabul, Afghanistan on September 12, 2019 [File: Scott Peterson/Getty Images]Koofi’s comments followed a report by the Afghan Journalists Safety Committee which said more than 300 women had left the industry in recent months.

Citing a “wave of targeted killings” as one of the main reasons, the report also listed financial difficulties caused by the coronavirus pandemic as another.

Last week, three female media workers from Enikass TV were killed by armed fighters in the eastern city of Jalalabad in an attack claimed by the local ISIL-affiliate.

“Women are more courageous than men, that’s the way it is,” the 84-year-old Argentinian pontiff said on his flight back to Rome after a four-day visit to Iraq.

Russian President Vladimir Putin wished for all women to be “healthy, happy and successful in everything, to reach understanding with everyone who is dear to you”.

“COVID-19 is hitting the poorest and most marginalised women the hardest,” Biden said in a statement.

“These global trends damage all of us because we know that governments, economies, and communities are stronger when they include the full participation of women – no country can recover from this pandemic if it leaves half of its population behind.”

In Turkey, President Recep Tayyip Erdogan underlined the importance of women in society and said his country will undertake new steps to combat violence against women and improve their social and economic status.

“Women, who make up fully half of humanity, cannot and should not be excluded from politics or any other domain of life,” Erdogan told a meeting of the governing party’s women’s branch.

The number of women being killed each year in Turkey has risen in the past decade to 300 last year, according to the rights group We Will Stop Femicide Platform.

Covid-19 pandemic 'a long way from over': WHO chief 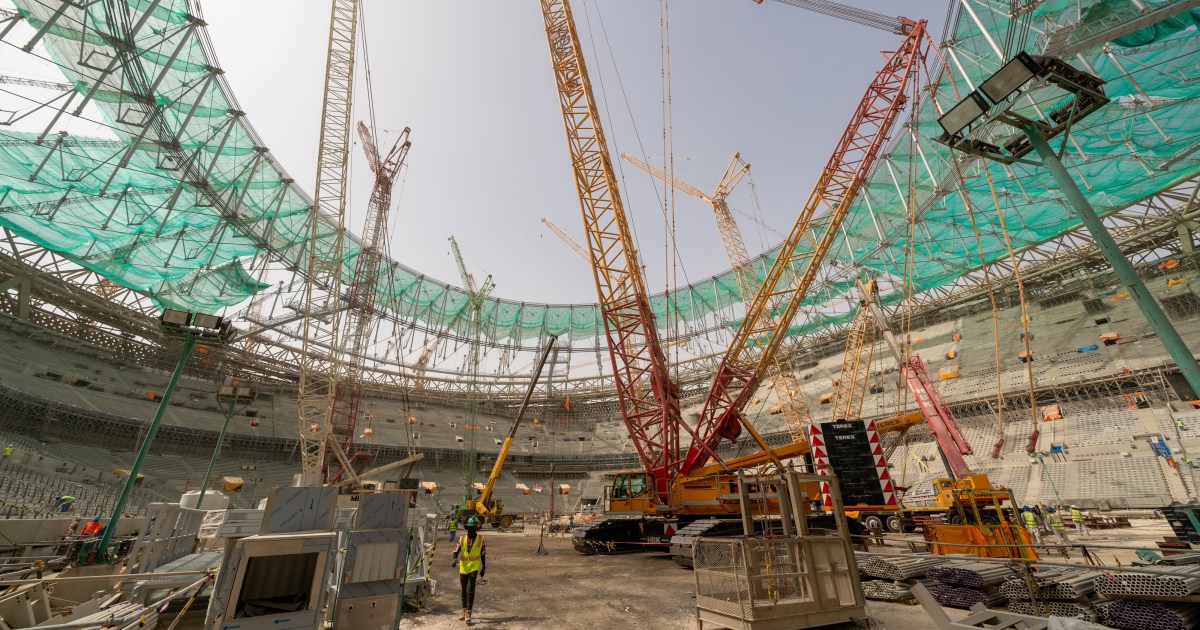