Witness in Floyd's car says his friend did not resist arrest 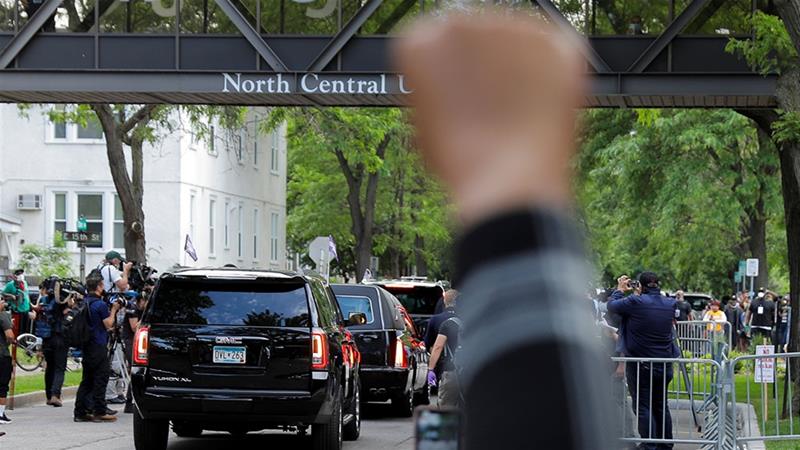 A man who was with George Floyd on the night he died said his friend did not resist arrest and instead tried to defuse the situation before he ended up handcuffed on the ground and pleading for air as an officer pressed a knee against his neck.

Maurice Lester Hall, a longtime friend of Floyd, was a passenger in Floyd's car when police approached him May 25 as they responded to a call about someone using forged currency at a shop. Hall told The New York Times that Floyd was trying to show he was not resisting. "I could hear him pleading, 'Please, officer, what's all this for?'," Hall told the newspaper.

A woman was also in the car with Floyd, but Hall said he did not know her name. Hall's identity was not made public until the Times report.

Hall said on the Good Morning America show of ABC News that the situation escalated quickly and police grabbed Floyd, put him in a squad car, dragged him back out and then "jumped on the back of the neck". He said Floyd was put in an ambulance and that he did not know his friend had died until the next day, when he saw the widely viewed bystander video on Facebook.

"He was just crying out at that time for anyone to help because he was dying," Hall told the Times. "I'm going to always remember seeing the fear in Floyd's face because he's such a king. That's what sticks with me, seeing a grown man cry, before seeing a grown man die."

Hall, 42, said he visited a memorial for Floyd and then hitchhiked to Houston, where he was arrested on Monday on outstanding warrants for felony possession of a firearm, felony domestic assault and felony drug possession. After his arrest, a Minnesota investigator interviewed him for hours about Floyd's death. His lawyer said he has since been released on the warrant issue.

Minnesota Governor Tim Walz and the state's Department of Human Rights have ordered a civil rights investigation into the Minneapolis Police Department to determine how to address racial discrimination and create systemic change. On Friday, Minneapolis city leaders and the state were working out an agreement for a temporary restraining order to force some immediate changes.

Any agreement would require court approval.