With election day less than a week away, both President Donald Trump and Joe Biden have been busy on the campaign trail. Trump has consistently been trailing Biden in national polls over the last few weeks, and has been making an intensive effort to get ahead in the race.

Here, we break down key issues that President Trump has repeatedly mentioned throughout his campaign, and are likely to come up again in these final few days of the battle for election victory.

At his rally in Sanford, Florida earlier this month, President Trump claimed that his administration has achieved “the most secure border in US history,” noting that the wall is being built at a rate of “10 miles a day” (16 kilometres). Trump also claimed that Mexico will be covering the cost, stating: “Mexico is paying, they hate to say it.” Trump has suggested that tariffs on Mexican imports and “a small fee at the border” would fund the wall. 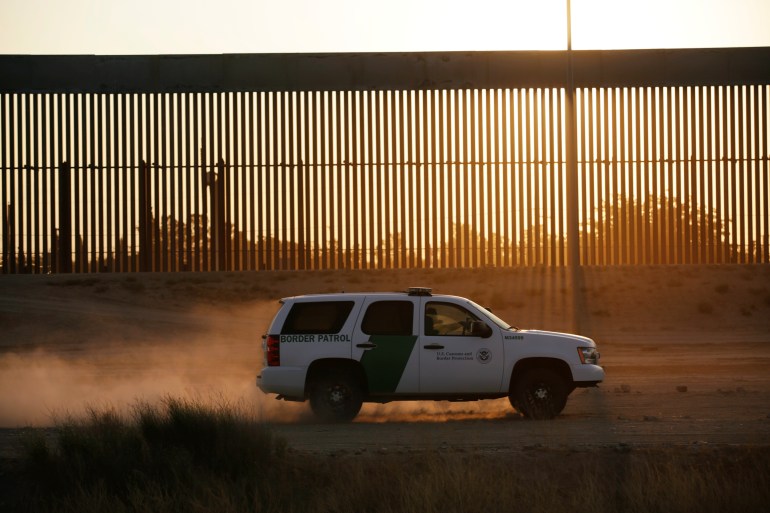 A vehicle of US Customs and Border Protection (CBP) patrols along a new section of the border wall in El Paso, Texas, as seen from Ciudad Juarez, Mexico [Jose Luis Gonzalez/Reuters]According to the US Customs and Border Protection, 360 miles (579km) of the wall had been constructed as of October 12, but approximately five miles (8km) are new construction – the rest is merely an extension or refurbishment of existing structures.

Further, Mexico has not paid for any portion of the wall. Rather, the US government has spent billions of dollars of taxpayer money on the expansion. The details and timeline of the “fees” suggested by Trump remain unclear.

At a rally in Johnstown, Pennsylvania, President Trump claimed that “for years, Biden tried to cut Social Security and Medicare”. He also stated that Biden “is pledging mass amnesty and federal healthcare for the illegal aliens,” which Trump suggests will “decimate Medicare and destroy your Social Security”.

In Johnstown, Pennsylvania on October 13, President Trump stated that his administration’s “early and aggressive action saved as many as two million lives”. He noted that his administration “pioneered life-saving therapies and reduced the fatality rate by 85 percent”. He has also mentioned the significance of implementing a travel ban on China, stating, “I did it in January.” Trump claims that Biden called him “xenophobic” for deciding to do so.

There is no evidence to support Trump’s claims that two million lives have been saved from his administration’s actions. This statistic is purely based on models that showed that the US could experience up to 2.2 million deaths if no steps were taken – meaning no social distancing, no masks and no business closures.

The only new treatment to date is Regeneron, which is an experimental antibody cocktail. The treatment has only been tested on 10 individuals, including the president, making it difficult to know for certain its effectiveness as a treatment. The case fatality rate has dropped significantly since the beginning of the outbreak, but this cannot be attributed solely to improvements in treatment – there are a number of other factors at play, such as increased testing.

It is also important to note that Trump never implemented a full travel ban to China, rather he imposed several restrictions. US restrictions took effect on February 2 but continued to allow travel from China. The Associated Press reported that more than 8,000 Chinese nationals entered the US in the first three months after the travel restrictions were implemented.

Soon after being released from hospital, President Trump made alarming comments about his recovery from COVID-19, going as far as stating that he’s “immune” and that he could “come down and start kissing everybody” at a rally earlier this month. 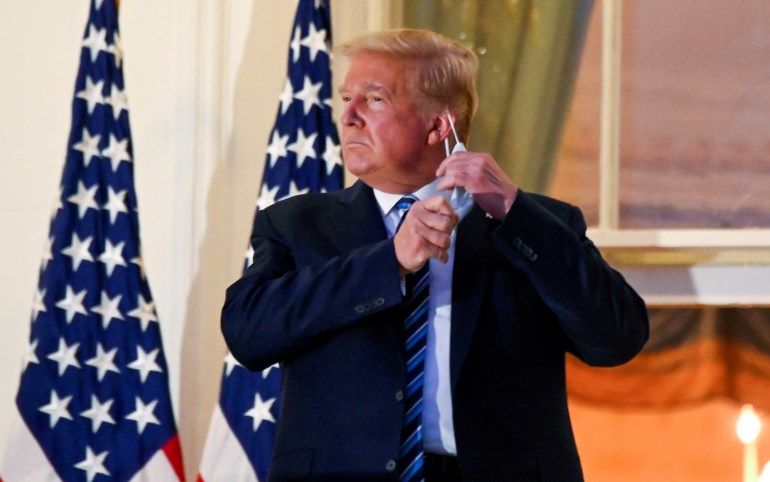 President Donald Trump pulls off his protective face mask as he poses atop the Truman Balcony of the White House after returning from being hospitalised at Walter Reed Medical Center [Erin Scott/Reuters]Trump’s comments come as the US grapples with more than 8.7 million cases of coronavirus and at least 226,000 related deaths. An ambiguous memo released by the White House suggested that Trump was no longer a transmission risk, but declined to confirm whether he had tested negative for the virus. Additionally, it cannot be said for certain that any individual becomes “immune” after testing positive for COVID-19.

Between January 2017 and February 2019, the US created 4.9 million new jobs, of which 454,000 were manufacturing jobs according to the Bureau of Labor Statistics. But the pandemic has dramatically altered the landscape.

In September, there were 647,000 fewer US manufacturing jobs than in February.

President Trump has boasted about the nation’s economic recovery from the coronavirus pandemic, calling it the “fastest recovery of any nation,” at a Pennsylvania rally. He also claimed that the US has seen “the smallest economic contraction of any major Western nation”. He cited 11.4 million jobs being created from May through September and a job growth rate that was “23 times faster than the first five months [of the Obama administration]” as evidence.

According to the Labor Department, US businesses added just under 11.4 million jobs from May through September, roughly half the 22.1 million jobs lost in March and April due to pandemic shutdowns. Unemployment has come down from its pandemic April high of 14.7 percent and currently stands at 7.9 percent.  But that is still more than double February’s rate of 3.5 percent, putting Trump on track to possibly leave office with the most job losses on record of any president.

The economy contracted by 31.4 percent on an annualised basis in the second quarter – the biggest drop seen in more than seven decades of records.

Many analysts are expecting the economy to rebound sharply in the third quarter, but millions are being left behind by a recovery that is worsening inequality.

And there are myriad indicators that the recovery is downshifting in the fourth quarter.

President Trump has stated that Joe Biden “wants to give up the [Muslim] ban” and “let people pour into our country”. At a recent rally in Johnstown, Pennsylvania, he noted that these actions would result in a “700 percent increase opening the flood gates to radical Islamic terrorism”.

It is true that Joe Biden has suggested that he would “end the Muslim ban on day one”. However, there is no evidence that an increase in the number of refugees allowed to enter the US would increase radical “Islamic terrorism”. Biden has put forth a plan to protect the civil rights of Muslim Americans and reverse Trump’s decrees, which many saw as being Islamophobic.

President Trump has boasted about spending $2.5 trillion to rebuild the US military. He added that the US has access to weapons and equipment “which no country has ever seen before”.

The figure, $2.5 trillion, is roughly the total for defence budgets for the last four fiscal years, but the cost of purchasing new military equipment accounts for about 20 percent of this. In inflation-adjusted dollars, Trump’s administration has spent about $590.7bn on new equipment to “rebuild” the military.

It is unclear what weapons Trump is talking about. Experts believe he may be referring to a modified nuclear warhead known as the W76-2, although Trump has refused to clarify his comments.