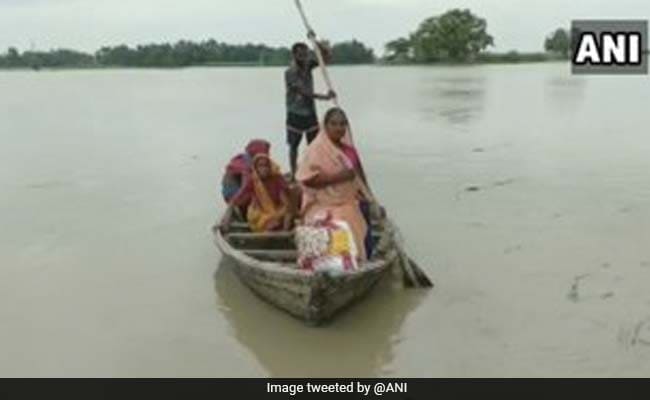 Large tracts of Bihar have been inundated after continuous monsoon rain for the last few days. The latest weather bulletin warns of more rain and "severe thunderstorm and lightning" in Bihar, parts of eastern Uttar Pradesh, Jharkhand, West Bengal in next 12 hours. Large swathes in the state have been flooded after the Kamla River, in Darbhanga, breached its banks due to heavy rain.

"Around 55,000 people have been affected and 100 houses were washed away...," locals in Darbhanga told news agency ANI. Part of a school building collapsed into the Koshi River in Bhagalpur, following heavy downpour and floods. There are no reports of any injuries.

Embankments, culverts and other infrastructure in several parts of the state have been damaged, according to local reports. The embankment on the Bagmati River in Sheohar district, was damaged yesterday, officials said on Monday. The main embankment of Bagmati is however safe.

"The main embankment of the Bagmati is safe. Our boats are ready to evacuate the locals so there is nothing to worry. Construction work along the embankment was being carried out. I have given orders to fix it," Avnish Kumar Singh, District Magistrate of Sheohar told news agency ANI. Traffic on the road, from Sheohar to Motihari, has been stopped as it passes close to the embankment.

Uttar Pradesh too received heavy rainfall today and water logging has been reported in Prayagraj.