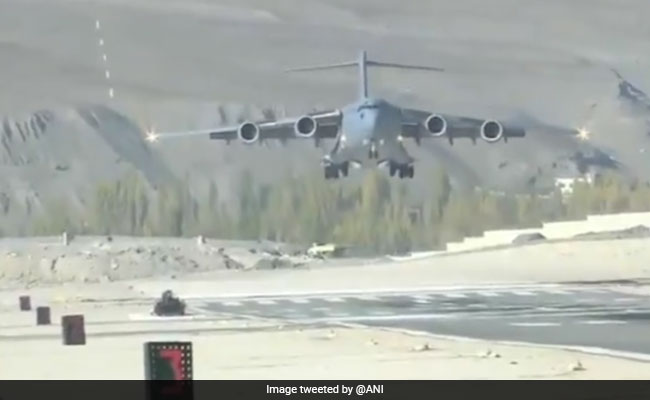 The C-17 fleet has been a vital part of the Indian Air Force's strategic and combat airlift capability.

A C-17 Globemaster transport aircraft of the Indian Air Force today landed at the Leh airbase in Ladakh with supplies for troops deployed in forward areas.

The video of the massive, sturdy, long-haul aircraft landing at the airstrip in the high-altitude region was shared by news agency ANI.

The jumbo transport aircraft can carry large combat equipment, troops and humanitarian aid across long distances in all weather conditions.

The Army, according to news agency PTI, has rushed tanks, heavy weaponry, ammunition, fuel, food and essential winter supplies to high-altitude areas in eastern Ladakh to maintain its combat readiness amid rising border tensions with China.

The news report, quoting sources, claimed that Chief of Army Staff Gen MM Naravane, aided by a group of top commanders, has been personally involved in planning and overseeing the implementation of the mammoth exercise that began in mid-July.

Almost all transport aircraft and helicopters of the Air Force including C-130J Super Hercules and C-17 Globemaster were used.

The C-17 fleet has been a vital part of the Indian Air Force's strategic and combat airlift capability. It has performed a wide range of operations in military missions, and provided peacekeeping support, humanitarian assistance and disaster relief in India and internationally, since induction to the Sky Lords squadron in 2013.