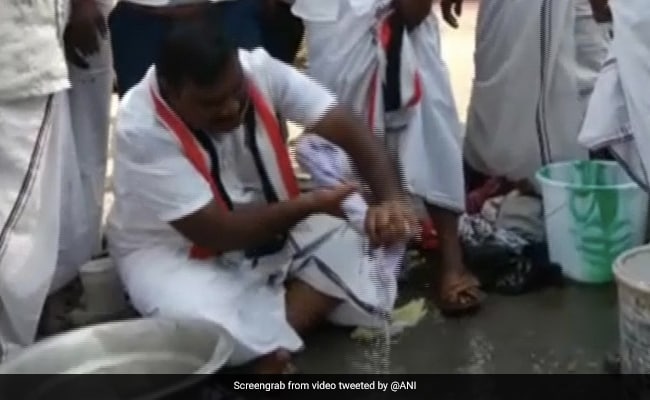 It is hard to get noticed in a sea of candidates and one candidate in Tamil Nadu went to great lengths to catch the attention of voters ahead of the April 6 state election. Thanga Kathiravan, a candidate fielded by the state's ruling AIADMK, was seen on Monday trying what looked like a novel campaign around laundry.

Squatting on the pavement, he washed clothes and promised washing machines if he won the vote. Thanga Kathivaran is contesting from Nagapattinam.

A video of the AIADMK candidate, posted on Twitter by news agency ANI, shows Thanga Kathivaran scrubbing clothes in a bucket full of soapy water. He is seen surrounded by a number of AIADMK party workers watching him and a few even tried to help transfer water from buckets.

In Tamil Nadu, elections are usually a backdrop to many a spectacle or quirky campaign. It hasn't disappointed this time either.

Candidates are coming up with innovative ways to woo voters in Tamil Nadu. Many contestants are campaigning with a robot while others are wearing their party symbol on their head.

Tamil Nadu: Viduthalai Chiruthaigal Katchi (VCK) workers campaign by painting the party's symbol on their body in support of their candidate Aloor Shanavas in Nagapattinam constituency

VCK has an alliance with Dravida Munnetra Kazhagam (DMK) for #TamilNaduElections2021pic.twitter.com/k1kKRpyWq9

Workers of the Viduthalai Chiruthaigal Katchi (VCK) party painted their party symbol on their body while campaigning for their candidate, Aloor Shanavas in Nagapattinam. VCK is fighting the state polls in an alliance with the opposition DMK of MK Stalin.