Venezuela expelled the head of the European Union’s delegation in Caracas, Foreign Minister Jorge Arreaza announced on Wednesday, in response to fresh sanctions imposed by the EU.

“Today, by decision of President Nicolas Maduro, we have delivered in Isabel Brilhante’s hands, who in recent years was the head of the European Union delegation in Venezuela, the declaration as ‘person non grata’,” he said.

“According to the Vienna convention, regarding diplomatic relations, she has been given a 72-hour deadline to leave the Venezuelan territory.” 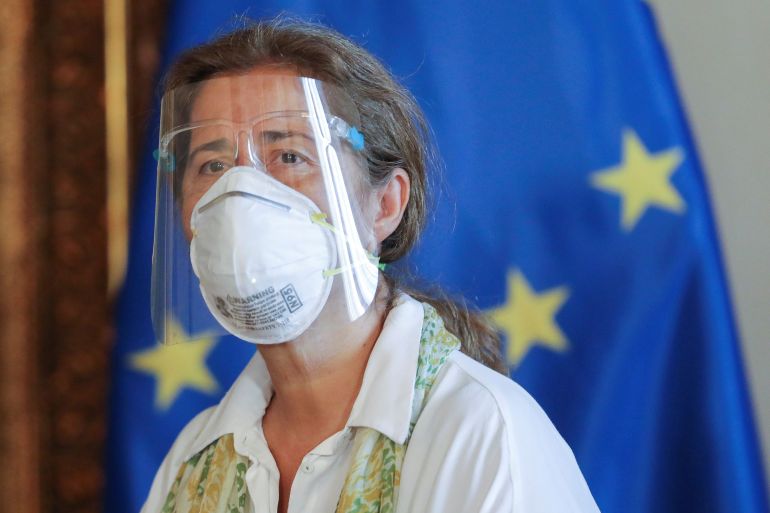 Footage aired on Venezuelan state television showed Foreign Minister Jorge Arreaza presenting Isabel – a national of Portugal – with a document, that he said formally declares the decision that she is no longer welcome in Venezuela [Manaure Quintero/Reuters]On Monday, the EU imposed sanctions on 19 Venezuelan officials it accused of “undermining the oppositions’ electoral rights” and “serious violations of human rights” in the country, after allies of Maduro won legislative elections in December that the Venezuelan opposition, as well as several other countries, said were fraudulent.

The EU said the measures are reversible and are not meant to affect the Venezuelan population.

“These targeted measures are designed not to have adverse humanitarian effects or unintended consequences for the Venezuelan population, and can be reversed,” the council of the EU said in a statement.

The sanctions froze the assets and imposed travel bans on the 19 officials “in view of the deteriorating situation in Venezuela following the December 2020 elections,” according to the statement.

The EU said it maintains sanctions on a total of 55 individuals in Venezuela. 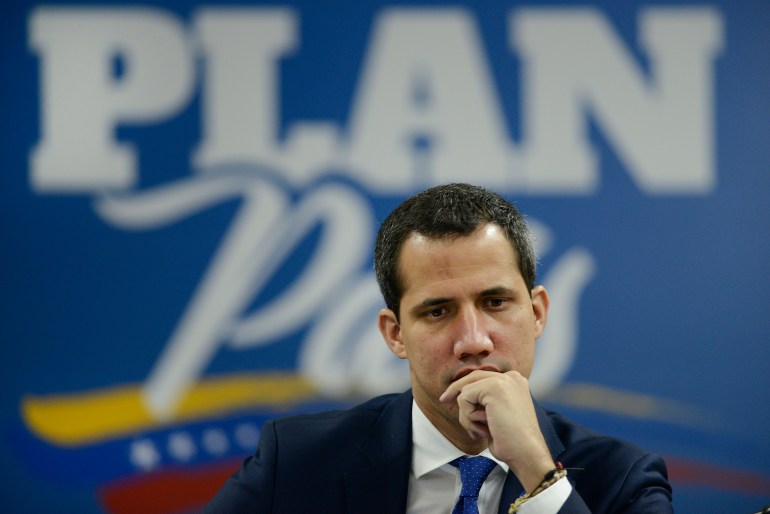 Opposition leader Juan Guaido, who has tried to overthrow Maduro, boycotted the legislative elections, saying there was never going to be a free and fair race [Matias Delacroix/AP Photo]Footage aired on Venezuelan state television showed Arreaza presenting Brilhante – a national of Portugal – with a document, that he said formally declares the decision that she is no longer welcome in Venezuela.

“We did it because there are 55 decisions, what they call in the European Union or the United States system, sanctions, as if they had any moral authority,” Arreaza said.

“Nor do they have a legal one [authority] to impose punishment of any kind on citizens of any other nations that are not within the European Union, much less in Venezuela,” he said.

The EU said the move undermines the bloc’s efforts to support negotiations and dialogue in the crisis-gripped nation.

“The EU profoundly regrets the decision by the Venezuelan authorities to declare the EU Head of Delegation in the country as persona non grata,” Nabila Massrali, EU spokesperson for Foreign Affairs and Security Policy said in a statement. “This will only lead to further international isolation of Venezuela.”

“We call for this decision to be reversed,” she said.

Opposition leader Juan Guaido, who in 2019 declared himself the interim president of Venezuela, boycotted the legislative elections, saying they was never going to be a free and fair race. Final results showed allies of Maduro winning by an overwhelming margin, giving them majority control of the nation’s National Assembly.

The US, under the Trump administration, recognised Guaido as the legitimate leader of Venezuela. President Joe Biden who took office on January 20, has reaffirmed that recognition. But the EU, earlier in January, dropped its recognition of Guaido as interim president after the vote, which led to Guaido losing his position as head of the National Assembly.

Several other Western countries continue to recognise Guaido as the rightful leader of the nation that is suffering from a longstanding political and economic crisis. Venezuela is also gripped by hyperinflation, and a lack of critical supplies, like clean water, food and energy.