Virginia Governor Ralph Northam has said he supports a bill introduced by state legislators to end capital punishment in the state, US media reported.

State legislators in Virginia’s House and Senate on Wednesday introduced bills that would abolish the death penalty and convert existing capital sentences to life sentences without parole, ABC News reported.

Later on Wednesday, Virginia Governor Northam said in his annual State of the Commonwealth address that he supports efforts to abolish Virginia’s death penalty, citing racial injustices in the criminal justice system and the possibility of the state condemning innocent people.

This is known to have happened at least once in modern history. Earl Washington, a Black man, was sentenced to death in 1984 and “spent 18 years in prison in Virginia, including nine-and-a-half of them on death row. But he didn’t do it”, Northam said in his address.

In an interview with The Richmond Times-Dispatch earlier this week, the governor also cited personal convictions and the federal death penalty blitz of 2020 as reasons motivating his push to end capital punishment. 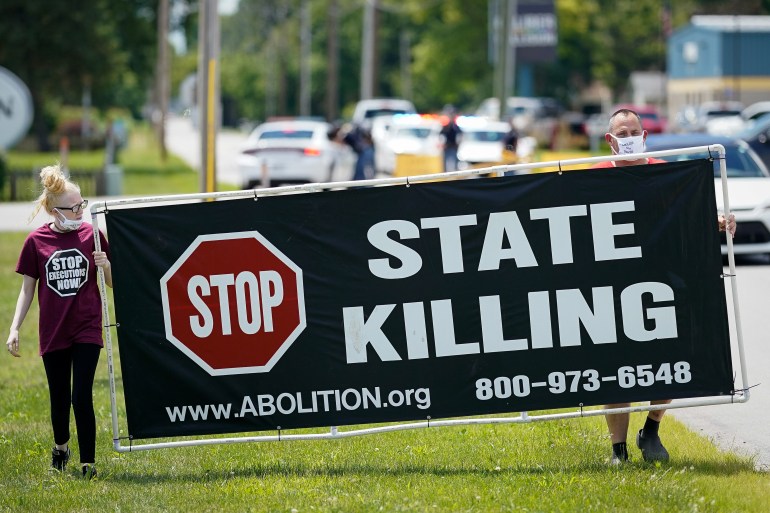 In this file photo from July 2020, protesters gather near the Federal Correctional Complex, Terre Haute, to show their opposition to the death penalty and execution of Daniel Lewis Lee [File: Bryan Woolston/Reuters]The state of Virginia has executed 113 people since 1976 when the Supreme Court ruled capital punishment could resume in the US following a 10-year moratorium.

It is the second-highest number of executions in a single state during that time, behind Texas, which has carried out 570 executions. Oklahoma has executed 112 people in the same time period.

According to the Death Penalty Information Center (DPIC), no state west of Texas has executed anyone for the last five years. Virginia has not sentenced anyone to death in nine years and only two men sit on its death row.

Governor Northam’s push to end the death penalty in Virginia has been met with support from prosecutors and advocacy organisations.

A group of three former Virginia attorneys general and 11 prosecutors wrote a letter to the state’s General Assembly, which passes laws, asking for death penalty abolishment as part of larger criminal justice reforms.

“The death penalty is unjust, racially-biased, and ineffective at deterring crime,” the group wrote.

The General Assembly is controlled by Democrats who favour criminal justice reform. Last year’s Black Lives Matter protests following several high-profile deaths of Black people during encounters with police have pushed the issue to the front of state and national politics.

“[T]here is an acknowledgement that ending the death penalty is imperative in a country grappling with racism in the legal system,” Sarah Craft, death penalty programme director at Equal Justice USA, said in an emailed statement. 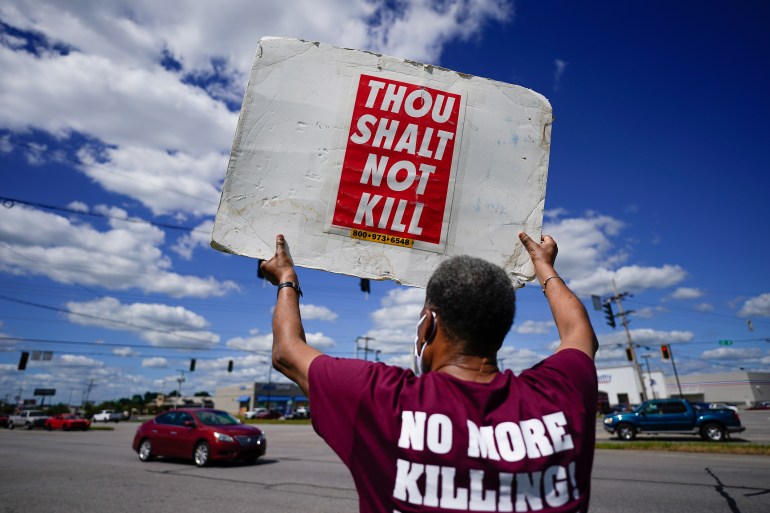 Two federal inmates are scheduled to be put to death this week: Corey Johnson, 52, on January 14 and Dustin Higgs, 48, on January 15 at the federal death chamber in Terre Haute, Indiana.

Earlier this week, a federal judge had granted them a stay of execution until February after both men tested positive for COVID-19. But the US Court of Appeals for the District of Columbia lifted the injunction on Wednesday.

Later on Wednesday, the US Court of Appeals for the Fourth Circuit granted Higgs a stay of execution, though its order did not state on what grounds.

The men are set to die less than one week before President-elect Joe Biden, who has said he will seek to abolish the death penalty, takes office.

Attorneys for both men say they are asking for new court hearings that could further delay the executions.

A Fourth Circuit panel last night granted a stay to #DustinHiggs on an unrelated issue that is unclear from the face of the court's order. @DPInfoCtr #deathpenalty
[END THREAD] pic.twitter.com/UMPOafWB9t

The federal government had not executed anyone for 17 years until 2020 when the Trump administration restarted federal capital punishment.

Ten people were put to death by the Justice Department in 2020. Lisa Montgomery was executed in the early hours of January 13, the first woman to be executed by the federal government since 1953.