US Secretary of State Blinken tours Canada and Mexico ‘virtually’

Due to the pandemic, Secretary of State Antony Blinken started a new chapter in American diplomacy on Friday with virtual visits to Mexico and Canada in what was billed as his first official trip.

Blinken’s meetings with Mexico and Canada, two of the largest US trading partners, covered economic ground as well as efforts to fight COVID-19, which has prompted all three countries to close their borders to all but essential traffic.

“I had the opportunity to conduct my first foreign visit with our important allies in Mexico and Canada,” Blinken said in a news conference on Friday afternoon, “as you will have noticed, we didn’t actually leave the State Department.” 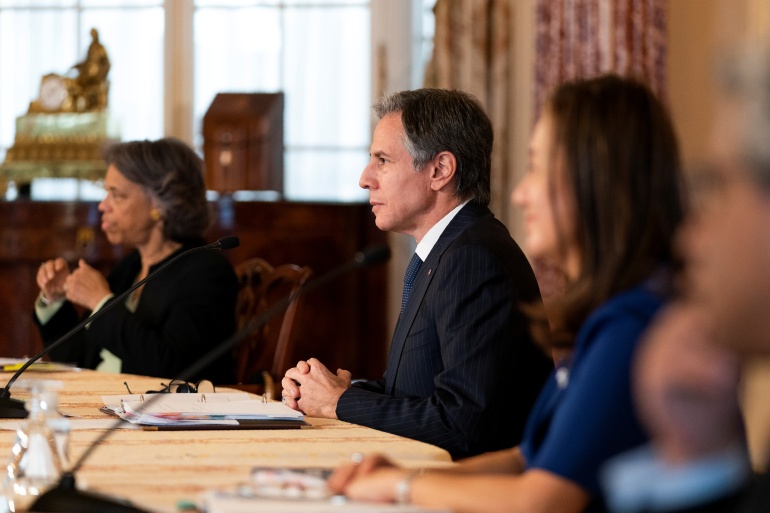 Secretary of State Antony Blinken speaks at the State Department in Washington, US, during a virtual meeting with Canadian Foreign Minister Marc Garneau who is in Ottawa, Canada on February 26, 2021 [Manuel Balce Ceneta/Pool via Reuters]The US, under former President Donald Trump, at times had fraught relations with its two neighbours, but Thursday’s effort appeared geared towards turning the page.

Blinken began his virtual visits with Mexico, a country Trump repeatedly disparaged, and emphasised the importance of relations between the two countries under President Joe Biden.

“I wanted to ‘visit,’ in quotation marks, Mexico first to demonstrate the importance that we attach, President Biden attaches, to the relationship between our countries,” Blinken told his counterpart, Foreign Secretary Marcelo Ebrard.

He also addressed immigration, a main focus of the Trump administration, which imposed a wide range of anti-immigration policies – a legacy Biden has been striving to reverse.

Biden ended Trump’s policy of requiring those seeking asylum to wait in Mexico or to pursue their claims in Central America. He also restored protections for people without legal status in the US who were brought to the country as children, many of whom are Mexican, and is backing legislation that would enable them to seek citizenship.

Excited to continue to my visit today with our #FriendsPartnersAllies in Canada. There is much we can do together to combat the COVID-19 pandemic, advance the North American economic recovery, and tackle the global challenge of climate change. pic.twitter.com/1hdfVW8SZr

Blinken, who earlier conducted a virtual tour of the busy border crossing at El Paso, Texas, said the administration is working with Mexico and Central American nations to ease the conditions that drive people to immigrate in the first place. He also discouraged migrants from coming to the US.

“To anyone thinking about undertaking that journey, our message is: Don’t do it. We are strictly enforcing our immigration laws and our border security measures,” Blinken said.

“The border is closed to irregular migration,” he said. 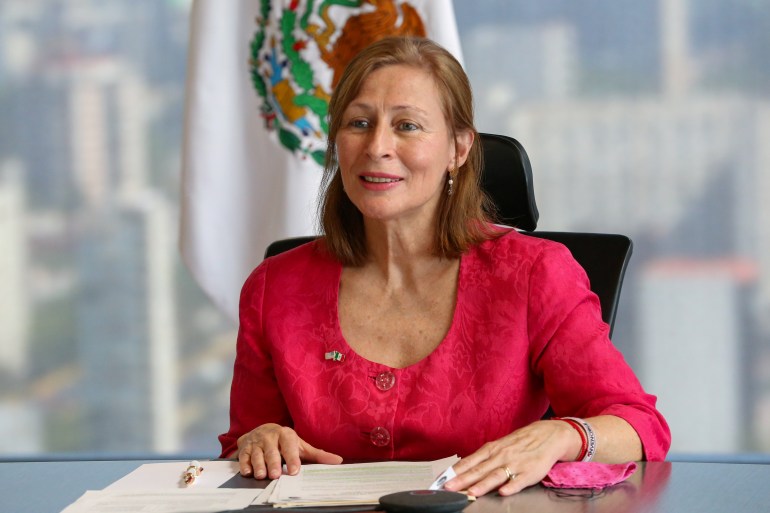 Mexican Secretary of Economy Tatiana Clouthier during a virtual meeting with Secretary of State Antony Blinken [Mexico’s Secretary of Economy Officer/Handout via Reuters]The online meetings also touched on trade, climate change and security, in a sign of Biden’s broader agenda with Mexico after his predecessor’s singular focus on migration.

The three nations signed a revamped trade accord last year after Trump demanded a renegotiation of the North American Free Trade Agreement.

Economy Minister Tatiana Clouthier said during her meeting with Blinken that President Andres Manuel Lopez Obrador saw the new USMCA North American trade deal as a major tool for the post-coronavirus recovery and was willing to work with Biden on making supply chains more resilient to shocks like the pandemic. 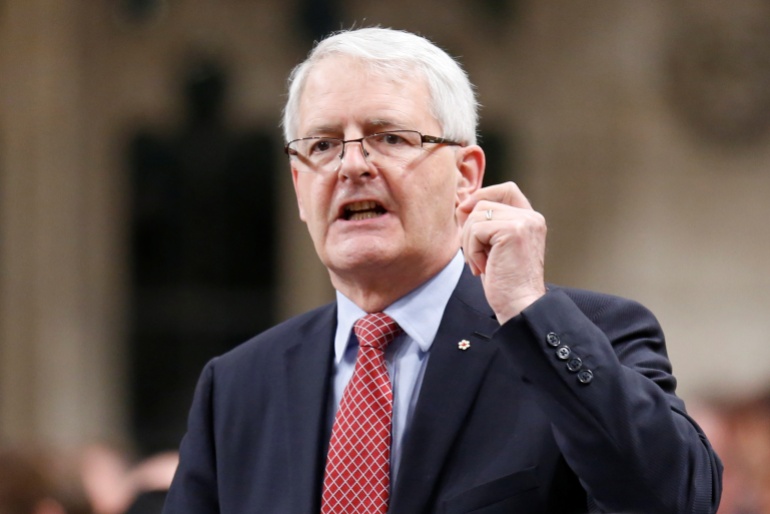 “Both Canadians and Americans have been impacted by this pandemic and have suffered losses and face many challenges in this crisis,” Garneau said. “Now is not the time for our two nations to turn inward,” he said.

Blinken echoed a similar sentiment saying, “It’s hard to think of two countries whose destinies are more connected, more intertwined than ours.”

“And we know that every single day the work that we’re doing, but more importantly, the deep ties between our people in virtually every aspect of our societies are benefitting both countries,” he said.