Republicans in the United States Congress are signalling a willingness to work with Democrats to advance police reform legislation amid continuing protests and a mounting political crisis.

Senate Majority Leader Mitch McConnell said the Senate will take up Republican-backed police reform legislation next week and work with Democrats in the House of Representatives to craft a compromise bill.

"We are serious about making a law here," McConnell told reporters at a news conference at the US Capitol on Wednesday.

"This is not about creating partisan differences. This is about coming together and getting an outcome," McConnell said.

The political situation in Washington, DC is evolving rapidly as public opinion moves strongly behind the huge protests against racism and violence in policing that continue to occur in major cities and small towns across the US.

Democrats, who control the House, are already advancing broad police reform legislation that would ban the use of chokehold, require new training in de-escalation techniques and eliminate protections for police from lawsuits, among other sweeping measures.

But any legislation that would be sent to President Donald Trump for his signature would first need approval from Senate Republicans along with the help from some Democrats in the upper chamber.

"The president's willingness to meet us on this issue, it's clear," said Senator Tim Scott, an African American who is leading the Republican legislative effort.

"Every lever of government wants change and most of us want about 70 percent of the same change," Scott said, assessing the prospect for enactment of legislation.

"The legislation is already bipartisan. The question is, can we get bipartisan support," Scott said at the news conference with McConnell. 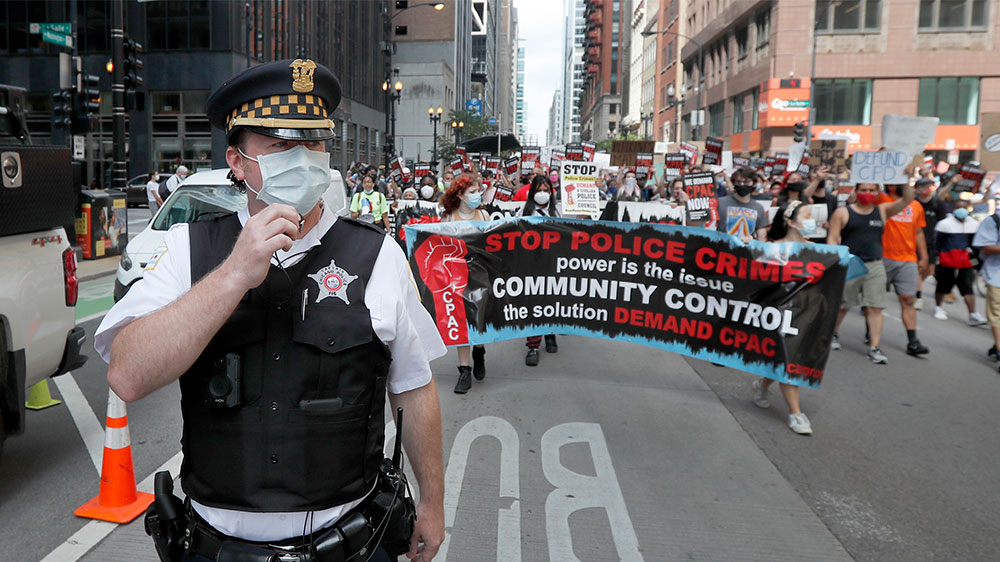 Scott, who has recounted his own encounters with police, is well respected by his Democratic colleagues as a leader on race and a credible voice on policing. But there are thorny policy differences to be worked out if the two sides are to reach an agreement.

Reacting to the introduction of the Republican bill, Senate Democratic leader Chuck Schumer said there was a "glaring contrast" between Democratic and Republican priorities that would have to be worked out.

"We in Congress have to take up the mantle and I'm glad that we'll be turning to this subject next week," Schumer said, calling Trump's executive order "window dressing" that will have little effect.

"We must all set our sights on achieving real, strong, effective reforms to police departments in America," Schumer said.

House Speaker Nancy Pelosi, a Democrat who will be a key power broker in any deal, said the Senate Republican bill is "inadequate" because it focuses on "studies and reporting" without "creating meaningful change".

Grateful to @RepKarenBass & @TheBlackCaucus for their leadership on fighting police brutality & racial injustice. Their expertise & experiences form the foundation of the #JusticeInPolicing Act. Together, we will secure the change & justice Americans are demanding. pic.twitter.com/qM6U4Pg3WL

Republicans face political pressure to act in response to the protests.

Republicans are struggling to maintain control of the Senate where Democrats have a better than 50-50 chance of regaining a narrow majority. Democrats led Republicans by 9 points in a generic ballot test in the same Economist/YouGov poll.

"We have seen a shift nationally in attitudes about race and policing," said James Henson, a pollster and political science professor at the University of Texas. "Our politics are very volatile right now."

And Republicans are feeling pressure from Black communities at home.

In March, Breona Taylor, a 26-year-old African American woman, was shot in her bed by police during a night-time raid on the wrong house. The incident occurred in Louisville, Kentucky, the hometown of Republican leader McConnell.

Senator John Cornyn, a Republican from Texas, which was the home state of George Floyd, said he has promised Floyd's family the Senate will act on police reform.

"I had an opportunity to talk to George Floyd's family," Cornyn said. "They're from Houston, Texas and Rodney, his brother, told me, he said, 'Senator, we are from Texas, and we want some Texas-size justice.' And I said, 'Well, Mr Floyd, to the best of my ability, that's exactly what we will deliver.'"