LGBTQ protections will be enshrined in US law if bill survives a steep climb to 60 votes in the Senate.

The US House of Representatives looks set to pass legislation enshrining LGBTQ protections in the nation’s labour and civil rights laws on Thursday as Republican and Democratic lawmakers feud over protections for transgender individuals.

The act amends existing civil rights law to explicitly include sexual orientation and gender identification as protected characteristics. The protections would extend to employment, housing, loan applications, education, public accommodations and other areas.

Controversial Georgia Representative Marjorie Taylor Greene, known for her adherence to aspects of the far-right QAnon conspiracy theory movement, hung a sign near her office door reading “There are TWO genders: MALE AND FEMALE” on Wednesday.

Greene was responding to Democratic Representative Marie Newman, whose office sits across from Greene’s, and who raised a transgender rights flag to protest against Greene’s opposition to the bill.

Our neighbor, @RepMTG, tried to block the Equality Act because she believes prohibiting discrimination against trans Americans is “disgusting, immoral, and evil.”

Thought we’d put up our Transgender flag so she can look at it every time she opens her door 😉🏳️‍⚧️ pic.twitter.com/dV8FatQFnx

Newman, whose daughter is transgender, used the incident in a fundraising email to her supporters, saying: “Greene’s hateful behavior put a fire in me and reminded me why I ran for Congress in the first place – to fight for everyone’s rights in the halls of power. I will never back down, but I can’t do it alone.”

Republicans claim these protections are unnecessary and would force religious organisations to take actions that go against their belief systems.

Supporters say the law is long overdue and would ensure that every person is treated equally under the law.

“It is needed because there is discrimination against people in the LGBTQ community,” Pelosi said at a Thursday press conference. “I wish it weren’t, it breaks my heart that it’s necessary”. Pelosi said there was “a sad event here … demonstrating we need to have respect”, referencing Greene’s actions. 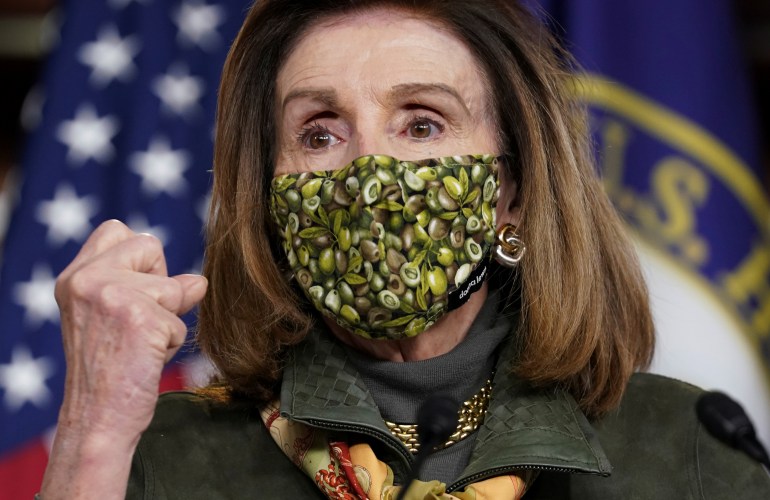 Speaker of the House Nancy Pelosi speaks during her weekly press conference at the US Capitol on February 18, 2021 [Kevin Lamarque/Reuters]“In the absence of federal civil rights protection, there are members of the LGBTQ community who are fair game in the eyes of the law to be targeted, based on sexual orientation,” said House Democratic Conference Chairman Hakeem Jeffries. “That is not America.”

The House passed the Equality Act in the last Congress with unanimous Democratic support and the backing of eight Republicans, but Donald Trump’s White House opposed the measure and it was not considered in the Senate, where 60 votes will be needed to overcome procedural hurdles.

Democrats are trying to revive it now that they have control of Congress and the White House, but passage appears unlikely in the evenly divided Senate.

The Supreme Court provided the LGBTQ community a resounding victory last year in a 6-3 ruling that said the Civil Rights Act of 1964 applied to LGBTQ workers when it comes to barring discrimination on the basis of sex.

Civil rights groups have encouraged Congress to follow up that decision and ensure that anti-bias protections addressing such areas as housing, public accommodations and public services are applied in all 50 states.

Biden made clear his support for the Equality Act in the lead-up to last year’s election, saying it would be one of his first priorities.

A paediatrician and former Pennsylvania physician general, Levine was appointed to her current post by Democratic Governor Tom Wolf in 2017, making her one of the few transgender people serving in elected or appointed positions nationwide.

Levine won past confirmation by the Republican-majority Pennsylvania Senate and has emerged as the public face of the state’s response to the coronavirus pandemic.