Asian stocks headed higher on Tuesday with Chinese stocks getting a boost after the New York Stock Exchange made a surprise about-turn on its decision to delist the shares of three of China’s biggest telecommunications companies.

Qatari stocks were also up sharply on hopes of a resolution to the years-long dispute with its Gulf neighbours, while crude oil investors were waiting for the outcome of a meeting of the world’s top producers to determine output levels.

Shares rose despite uncertainty about Senate runoffs in the US state of Georgia, which could have a big impact on incoming US President Joe Biden’s ability to pursue his preferred economic policies.

MSCI’s broadest index of Asia-Pacific shares outside Japan jumped to a record of 671.63.

The NYSE’s move is a significant reversal of its decision that followed US President Donald Trump’s executive order barring investments by US entities in Chinese firms with military ties. The NYSE’s initial decision had threatened to worsen already tense relations between the two superpowers.

But Japanese shares lost 0.34 percent after a spokesman said the government will reach a decision on a state of emergency for Tokyo and surrounding cities on Thursday to curb coronavirus infections.

US crude futures were little changed at $47.61 per barrel, while Brent futures edged down by 0.1 percent to $51.04 per barrel. The world’s biggest oil exporters, comprising the OPEC cartel and its allies including Russia, will meet later on Tuesday to decide output levels for February after talks broke down the previous day.

“A seeming lack of cohesion among the oil cartel and its allies posted near-term uncertainty to oil prices, on top of many downside risk concerns such as viral mutations and the introduction of further lockdowns in the [United Kingdom], Germany and Japan,” Margaret Yang, a strategist at investment firm IG, said in a research note sent to Al Jazeera.

Qatar stocks rose nearly 1.7 percent in early trade on Tuesday, boosted by news that a breakthrough has been reached in Qatar’s three-year-old dispute with Saudi Arabia and several other Arab countries.

Qatar’s Emir Sheikh Tamim bin Hamad Al Thani headed to Saudi Arabia, state media said, for a Gulf Arab summit that is expected to see formal agreement towards ending a dispute that has seen Riyadh and its allies boycott Qatar.

Sheikh Tamim’s participation comes after Kuwait’s foreign minister announced late on Monday that Saudi Arabia will reopen its airspace, as well as its land and sea border, with Qatar, paving the way for a deal towards resolving the Gulf crisis.

Starting with a ‘bang’

In the US, control of the Senate is at stake with Tuesday’s dual runoff elections in Georgia.

A Democratic victory in both races could tip control of the Senate away from Republicans, but the contests are very tight and the results may not be immediately known, which could lead to a repeat of the chaotic vote recounts after the US presidential election last year.

“2021 starts with a bang with pivotal political and economic news for markets to digest. The undisputed highlight will be the result of the Senate seat runoff elections in Georgia,” James Knightley, chief international economist at ING, wrote in a research memo.

“If the Democrats win both seats this should lead to the most substantial 2021 fiscal stimulus. Nonetheless, it could be the excuse for a near-term consolidation in risk markets after a strong post-election rally.” 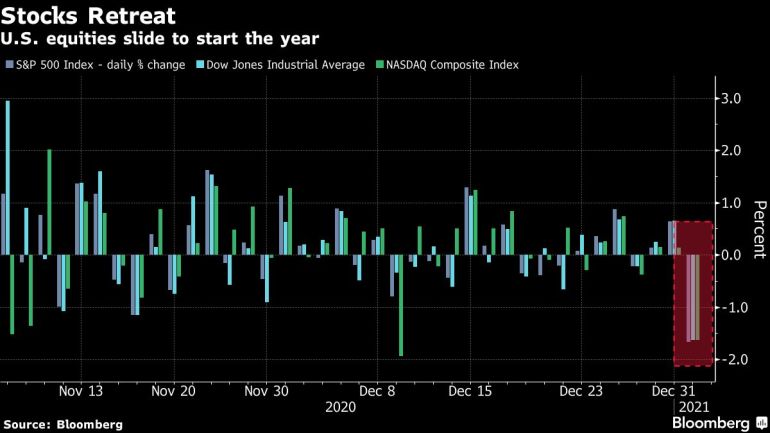 Outgoing Republican President Trump’s call to pressure Georgia’s top election official to “find” votes to overturn his loss to President-elect Biden in the state has also unnerved some investors.

The House and the Senate are scheduled to certify Biden’s election win on Wednesday, but some Republicans have pledged to vote against this and thousands of Trump supporters are expected to converge on the capital in protest.

The MSCI’s broadest gauge of global stocks was unchanged, sitting just below a record reached in the previous session.

Increased risk aversion helped the dollar index rebound from a two and a half year low against a basket of key global currencies, but moves were subdued at the start of the year.

The British pound bought $1.3591, recovering some of Monday’s losses after Prime Minister Boris Johnson ordered a lockdown to try and slow a fast-spreading coronavirus variant.