US charges 8 in alleged Chinese surveillance effort in US

‘Operation Fox Hunt’ allegedly involved threatening dissidents and their families who were living in the US.

The Justice Department has charged eight people with working on behalf of the Chinese government in a pressure campaign aimed at coercing a New Jersey man who was wanted by Beijing to return to China to face charges, officials have said.

Five of the eight were arrested Wednesday, accused of participating in a covert operation that officials say was built on intimidation, bullying and “very disturbing” tactics aimed at pressuring targets sought by Beijing. The other three are believed to be in China.

The alleged plot was known as “Operation Fox Hunt” and “Operation Skynet,” court records show. Its goal was to target Chinese nationals living in foreign countries and intimidate them into returning to China to face charges.

The charged are accused of threatening actions, including affixing “a threatening note” to the door of the residence of an individual identified as John Doe-1. The note allegedly said: “If you are willing to go back to mainland and spend 10 years in prison, your wife and children will be all right.  That’s the end of this matter!”, the Justice Department said in a press release. 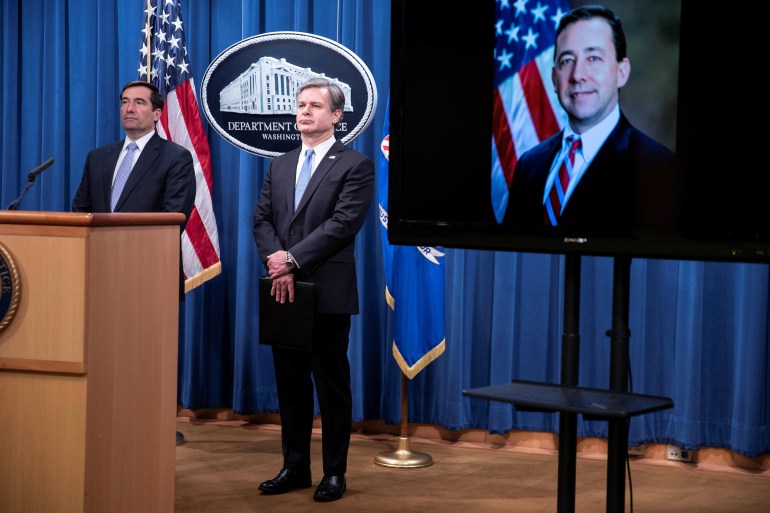 Assistant Attorney-General for National Security John Demers and FBI Director Christopher Wray attend a virtual news conference at the Department of Justice in Washington on October 28 [Sarah Silbiger/Pool via Reuters]The Justice Department further alleges that: “Between February 2019 and April 2019, other co-conspirators caused unsolicited packages to be sent to John Doe-1’s residence. These packages contained letters and a video with messages intended to coerce John Doe-1’s return to the PRC [People’s Republic of China] by threatening harm to family members still residing in the PRC.”

Assistant Attorney General for National Security John Demers said in the release: “With today’s charges, we have turned the PRC’s Operation Fox Hunt on its head … The five defendants the FBI arrested this morning on these charges of illegally doing the bidding of the Chinese government here in the United States now face the prospect of prison.”

The arrests are among a series of recent actions the Trump administration has taken against China, a country President Donald Trump regards as a prime rival.

In July, the Justice Department charged hackers working with the Chinese government with targeting firms developing vaccines for the coronavirus and stealing hundreds of millions of dollars worth of intellectual property and trade secrets from companies across the world.