US aviation body orders urgent probes of some Boeing 777 engines

Inspections are to focus on Pratt & Whitney engines of the type that failed during a United Airlines flight on Saturday.

The United States Federal Aviation Administration (FAA) says it is ordering immediate inspections of Boeing 777 planes fitted with Pratt & Whitney PW4000 engines after one of the jets failed on a United Airlines flight on Saturday.

Operators must conduct a thermal-acoustic image inspection of the large titanium fan blades – essentially a way of peering under the surface of the metal – located at the front of each engine, the FAA said on Tuesday.

“Based on the initial results as we receive them, as well as other data gained from the ongoing investigation, the FAA may revise this directive to set a new interval for this inspection or subsequent ones,” the FAA said.

The US National Transportation Safety Board (NTSB) said on Monday that a cracked fan blade from United flight 328’s engine that caught fire shortly after taking off from Denver, Colorado, was consistent with metal fatigue.

When metal fatigues, a crack can grow progressively longer each time it is stressed as the engine starts up. Such cracks can linger for years before they lead to failure.

After the 40.5-inch (103-centimetre) blade snapped, it tore off another blade and the front structure of the engine, pelting a suburban neighbourhood with metal and other debris. 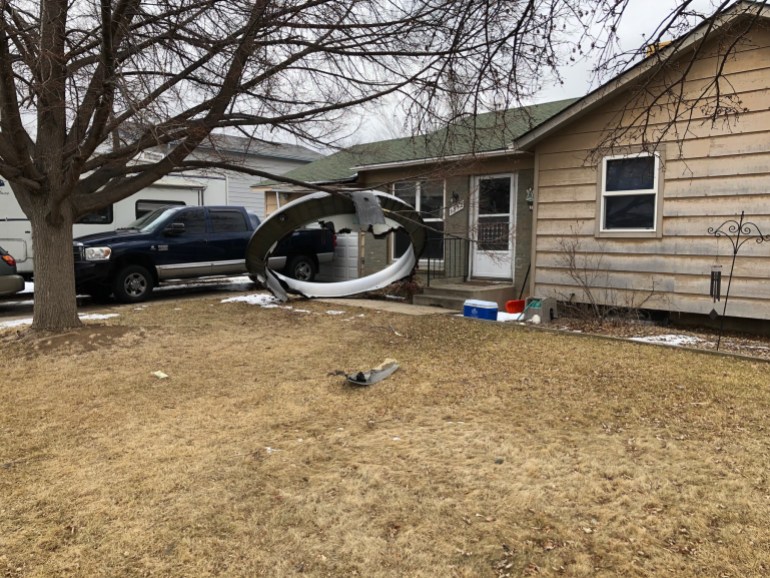 Parts of the shattered engine from United Airlines flight 328 landed in the suburb of Broomfield, Colorado [File: Handout via EPA]

Most of the destruction in Saturday’s failure was confined to the engine, but some material hit the plane’s fuselage, causing minor damage, National Transportation Safety Board Chairman Robert Sumwalt said on Monday. The pilots made an emergency landing and no one was hurt.

In March 2019, after a United engine failure in 2018 attributed to fan blade fatigue, the FAA ordered inspections for every 6,500 flights.

An airline would typically accumulate 1,000 flights about every 10 months on a 777, an industry source familiar with the matter told the Reuters news agency.

The FAA said in 2019 that each inspection was expected to take 22 man-hours and cost $1,870. It did not provide updated estimates on Tuesday.

South Korea’s transport ministry said on Tuesday it has told its airlines to inspect the fan blades for every 1,000 flights following guidance from Pratt & Whitney after the latest United incident.

The ministry did not respond immediately to a request for comment after the FAA’s order. Korean Air and Asiana Airlines said they would comply with the relevant authorities’ directives.

The engine that failed on the 26-year-old Boeing 777-200 United Airlines plane is used on 128 aircraft, or less than 10 percent of the global fleet of more than 1,600 of the delivered Boeing 777 wide-body jets.

Pratt & Whitney, a division of Raytheon Technologies Corp, said that it is coordinating all actions with Boeing, airline operators and regulators following the FAA’s directive. 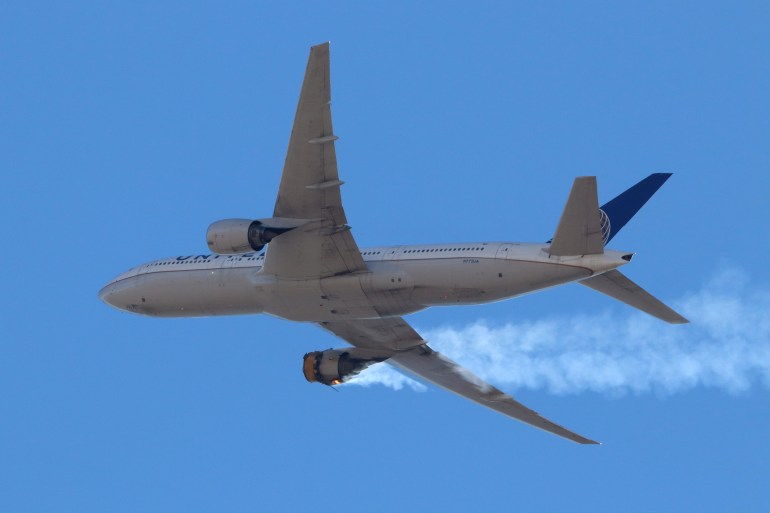 United Airlines flight UA328, carrying 231 passengers and 10 crew on board, returned safely to Denver International Airport with its starboard engine on fire after its pilots called a Mayday alert [File:  Hayden Smith/@speedbird5280/Handout via Reuters]“The process requires the shipment of fan blades to Pratt & Whitney, where thermal-acoustic imaging inspection will be used to confirm airworthiness,” the company said, according to the Bloomberg news agency.

Boeing said it supported the FAA’s latest inspection guidance and would work through the process with its customers.

It had earlier recommended that airlines suspend the use of the planes while the FAA identified an appropriate inspection protocol and Japan imposed a temporary suspension on flights after the incident on Saturday.

United, the only US carrier using PW4000-112 engines, had temporarily grounded its fleet of planes fitted with the jets, before the FAA announcement. The airline said on Tuesday it would comply with the airworthiness directive.

United has warned of possible disruptions to its cargo flight schedule in March as it juggles its fleet after its decision to ground 24 Boeing 777-200 planes, according to a notice sent to cargo customers.

Another 28 of United’s 777-200 planes were already grounded before the incident on Saturday, amid a plunge in demand due to the coronavirus pandemic. 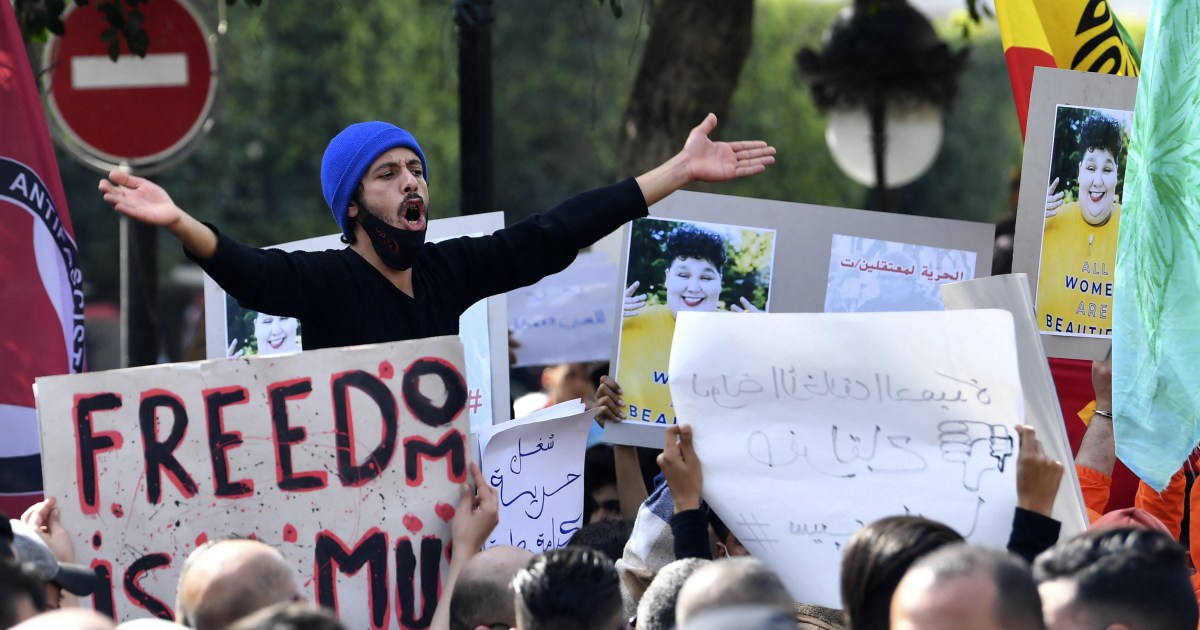 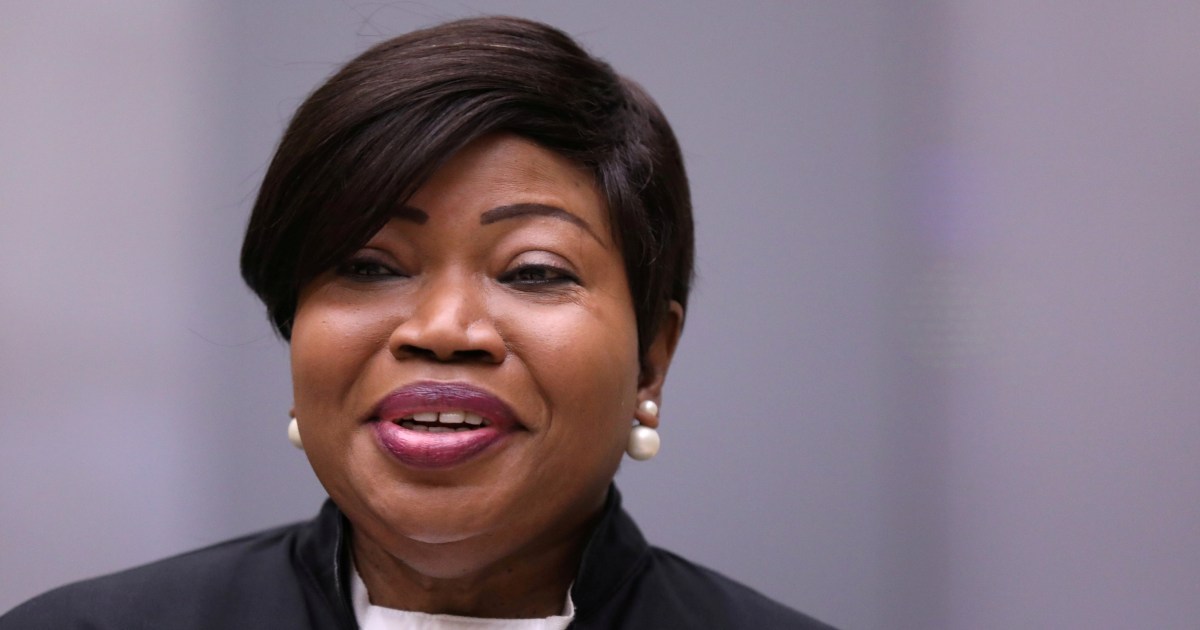 Will Biden’s return to multilateralism extend to the ICC?