The move is the latest in a line of policy decisions by the Trump administration that show support for Israel.

The United States will allow US citizens born in Jerusalem to list Israel as their place of birth on passports and other documents, according to a new policy announced on Thursday.

The move came a day after the US amended science accords signed with Israel to apply to institutions in the occupied West Bank. The changes, enacted days before the US election, appeared to be aimed at shoring up the support of evangelical Christians and other Israel backers.

President Donald Trump’s administration broke with decades of US policy by recognising Jerusalem as Israel’s capital in 2017 and later moving the embassy there from Tel Aviv, where most other countries maintain their missions.

Israel captured and occupied East Jerusalem in the 1967 Middle East war along with the West Bank and the Gaza Strip, territories the Palestinians seek as part of their future state. Israel considers the entire city its “unified, eternal” capital while the Palestinians want their own capital in East Jerusalem.

Consistent with President @realDonaldTrump's policy, I am happy to announce U.S. citizens born in Jerusalem can now elect to list their place of birth as either "Jerusalem" or "Israel" on their passports. We remain committed to lasting peace between Israelis and Palestinians.

Secretary of State Mike Pompeo said in a statement the new passport policy was in keeping with the decision to recognise Jerusalem as Israel’s capital. Jerusalem-born Americans will be able to specify either “Israel” or “Jerusalem” as their place of birth on passports and official documents.

Those who do not specify their place of birth will be listed as having been born in Jerusalem.

Trump has taken a series of unprecedented steps to support Israel and isolate the Palestinians. He released a so-called “plan” to resolve the Middle East conflict in January that overwhelmingly favours Israel and was immediately rejected by the Palestinians.

The administration has succeeded, however, in improving ties between Israel and other Arab nations. In recent weeks, the United Arab Emirates, Bahrain and Sudan have agreed to normalise relations with Israel, giving Trump a string of foreign policy achievements ahead of the vote.

In return, the UAE hopes to purchase advanced US weapons, including stealth F-35 fighter jets, and Sudan will be removed from the US list of state sponsors of terrorism, which will allow it to receive much-needed foreign aid.

Israel said last week it dropped its objections to the sale of advanced weapons to the UAE after the Pentagon provided assurances it would preserve Israel’s military edge in the region. 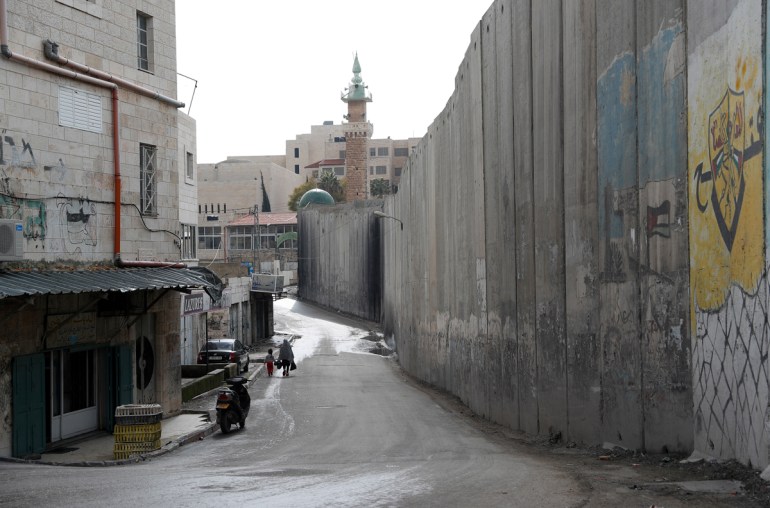 A woman and a child walk along the wall separating East Jerusalem from the Palestinian village of Abu Dis, the proposed Palestinian capital in US President Donald Trump plan for the Middle East, on January 29, 2020 [Emmanuel Dunand/AFP]Israeli Prime Minister Benjamin Netanyahu has repeatedly insisted the agreement to establish ties with the UAE amounted to “peace for peace” and that arms deals were not part of it.

But Emirati officials have indicated there were understandings on the matter, and President Donald Trump has said the US was considering the Emirati request for the planes.

US Secretary of Defense Mark Esper visited Israel on Thursday and met with top Israeli officials.

Israeli Minister of Defense Benny Gantz, who visited Washington last week, said he was “deeply appreciative of our dialogue, which has ensured that Israel now has the tools it needs to contend with destabilising forces in the region”.