UP Migrant Family Sells Jewellery For Food , Government Steps In 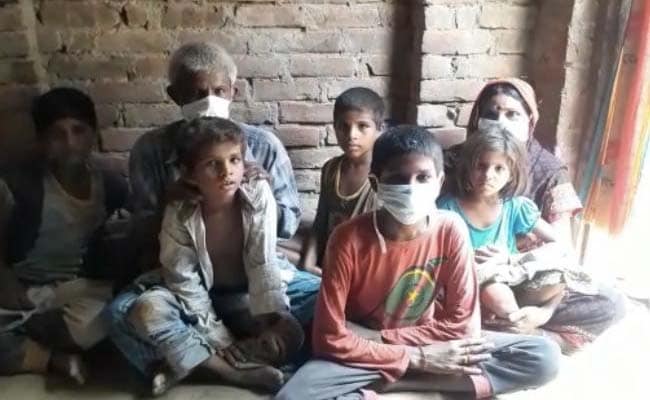 Sri Ram had migrated to Tamil Nadu after his marriage.

A migrant worker in Uttar Pradesh - forced to return to his hometown from Tamil Nadu with his family last month after his landlord asked him to leave - had to sell his wife's jewellery for Rs 1,500 in a local market in Kannauj to buy food and medicines amid lack of means. The district administration has now stepped forward to help him after local media highlighted his plight.

The family had no ration card, no job card under the MNREGA (Mahatma Gandhi National Rural Employment Guarantee Act) or rural jobs scheme. Both have been issued now.

Sri Ram from Fatehpur Jasoda village in Kannauj, around 150 km from Lucknow, had migrated to Tamil Nadu about three decades ago after his marriage.

He used to sell 'kulfi' (a frozen dessert) in the southern state's Cuddalore town where he lived with his wife and nine children at a rented home. In the third week of May, they were asked to vacate the house by the landlord and go back to their village.

This was just the beginning of their ordeal. The family boarded a train on May 19 and reached their village in UP two days later.

"We got 10 kg of rice and grain each from the government when we returned. But we are a large family and that we ran out of ration soon. After this, my mother and two siblings fell ill. My father tried to get work but was again jobless in two days," Raj Kumari, one of Sri Ram's daughters, recalled.

"Finally, we had no option but to sell jewellery that my mother used to wear. That helped us get food for a few days and some medicines. We checked for ration card too but we were told new ones are not being made right now," she said.

The district administration has taken note of their ordeal. "I sent a block development officer and a supply inspector to the village to investigate. After an inquiry, we found that this family had come to their village about two weeks ago and had initially gone to one of our transit camps. They were registered and we gave them a ration kit for 15 days," Rakesh Mishra, Kannauj's district magistrate told the journalists.

"They did not have a job card so we got one made for them and we also got a ration card made for them. Now they have no problems," Mr Misra added.

Over 25 lakh migrant workers and their families have returned to Uttar Pradesh, according to the official figures, since March after the government announced one of the world's strictest lockdowns to tackle the pandemic.

The Yogi Adityanath government says it is committed to providing free ration and work to every migrant worker returning home and their family.

In a statement dated June 3, the state government said it has provided free ration - 5 kg rice and 1 kg gram - to 53,840 migrant workers this month on temporary ration identity cards.

By the end of June, the government says, 3 lakh 74 thousand migrant workers and their families will get ration cards.

Since March, according to the officials concerned, subsidised or free grain has been given to migrant workers and their families based on 11 lakh ration cards, which means there were around 30 lakh beneficiaries.

BSP plus Brahmin voters an unbeatable combination in UP, says Satish Mishra