UN Security Council calls for ‘immediate reversal’ of decision by Turkey and Turkish Cypriots to reopen part of Varohsa.

The UN Security Council has condemned the decision by Turkey and Turkish Cypriots to reopen a residential section of an abandoned suburb and called for “the immediate reversal” of this unilateral action, warning that it could raise tensions on the divided Mediterranean island.

A presidential statement approved by all 15 council members at an open meeting on Friday reiterated that any attempt to settle any part of the Varosha suburb “by people other than its inhabitants is inadmissible”.

“The Security Council calls for the immediate reversal of this course of action and the reversal of all steps taken on Varosha since October 2020,” the 15-member body said in a statement on Friday.

The statement’s adoption followed a closed-door briefing to the council Wednesday by the outgoing UN special representative that focused on Turkish Cypriot leader Ersin Tatar’s announcement Tuesday that a 3.5 square-kilometre (1.35 square-mile) section of Varosha would revert from military to civilian control.

He made it ahead of a military parade attended by Turkish President Recep Tayyip Erdogan to commemorate the 47th anniversary of the Turkish invasion of Cyprus.

On a trip to the north of divided Nicosia on Tuesday, Erdogan declared that a half-century of UN efforts had failed and that there should be “two peoples and two states with equal status”.

The United States voiced concern that his remarks would have a “chilling effect” on UN-led efforts for a solution in Cyprus.

“The Security Council underscores the need to avoid any further unilateral actions not in accordance with its resolutions and that could raise tensions on the island and harm prospects for a settlement,” the council said. 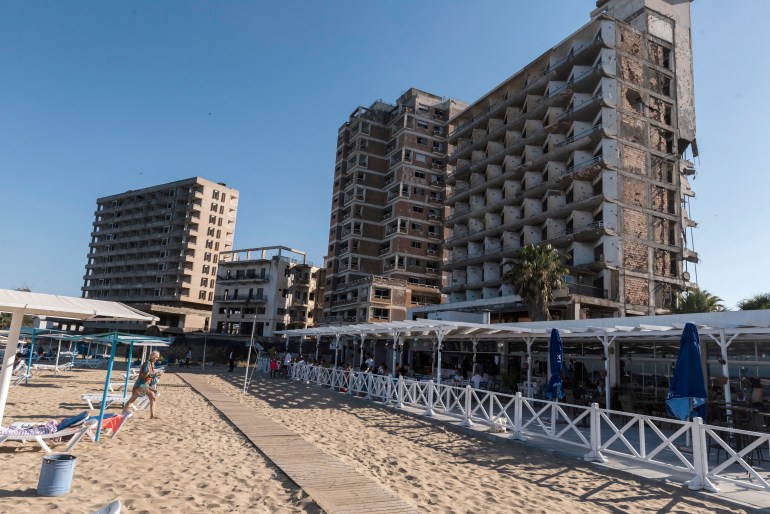 People spend time at the seaside in the fenced-off area of Varosha in Famagusta town in the self-proclaimed Turkish Republic of Northern Cyprus (TRNC) of the divided Mediterranean island of Cyprus [File: Iakovos Hatzistavrou/AFP] Ankara shrugs off condemnation

Turkey’s foreign ministry rejected the council’s statement and statements by some countries, saying they were based on unfounded claims, inconsistent with the realities on Cyprus.

“These statements are based on Greek-Greek Cypriot black propaganda and groundless claims,” the statement said.

It said Varosha was part of the territory of the Turkish Republic of Northern Cyprus (TRNC), which is only recognised by Ankara, and that it had not been opened to settlement.

All TRNC decisions respect property rights and are in full compliance with international law, it added.

Cyprus has been divided since 1974 when Turkey invaded in response to an abortive coup engineered by the then military in Athens that aimed to unite the island with Greece.

An estimated 17,000 Greek Cypriot residents of Varosha fled the advance of Turkish troops in 1974. It has remained empty ever since, sealed off with barbed wire and no-entry signs. UN resolutions have called for the area to be turned over to administration by the international body.

“The Security Council stresses the importance of full respect and implementation of its resolutions, including the transfer of Varosha to UN administration,” the council said on Friday.

Under the terms of a 2004 UN reunification blueprint, Varosha was one of the areas which would have been returned to its inhabitants under Greek Cypriot administration.

The plan, which detailed reunification under a complex power-sharing agreement, was rejected in a referendum by Greek Cypriots.