Michelle Bachelet presses for an independent assessment of the situation in Muslim Uighur homeland as her visit to China is delayed.

United Nations human rights chief Michelle Bachelet has decried the reported arbitrary detentions and ill-treatment of Muslim Uighurs in China’s Xinjiang, as she also drew attention to the restrictions of basic civil and political freedoms in the country including Hong Kong.

Bachelet said that given reports about the use of arbitrary detention, ill-treatment, sexual violence and forced labour against Muslim Uighur minorities, there was a need for a thorough and independent assessment of the situation.

“Information that is in the public domain indicates the need for independent and comprehensive assessment of the human rights situation,” she said.

Bachelet said she hoped to clinch an agreement with Chinese officials about a visit to the country.

As early as June 2019, China’s ambassador to Geneva, Chen Xu, had said that Bachelet is welcome to visit Xinjiang. But the visit has yet to come through.

Louise Arbour was the last UN High Commissioner for Human Rights to visit China, in September 2005.

Activists and UN experts have said that at least one million Muslim Uighurs are detained in camps in the western region of Xinjiang.

After initially denying the camps existed in Xinjiang, Beijing later defended them as vocational training centres aimed at reducing the appeal of extremism.

Bachelet, a two-time president of Chile, is the latest high-profile figure to add her voice to a wave of criticism of China’s rights record, particularly in Xinjiang.

On Thursday, the Dutch parliament passed a non-binding motion saying the treatment of the Muslim Uighur minority in China amounted to genocide, the first such move by a European country. 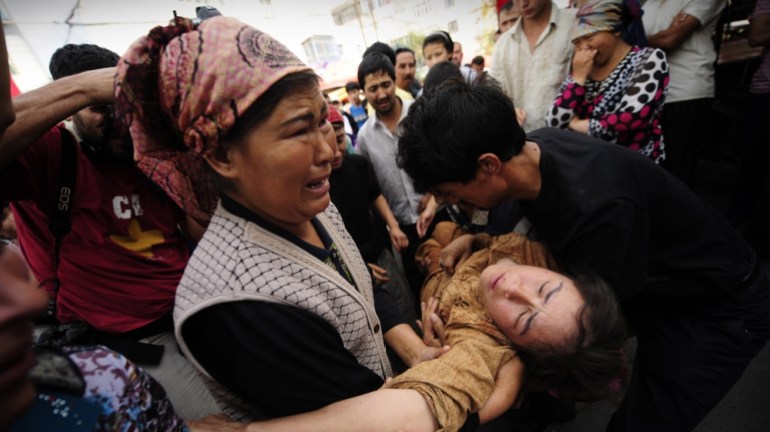 The Biden administration has endorsed a determination by the Trump administration in its final days that China has committed genocide in Xinjiang and has said the United States must be prepared to impose costs on China.

China hit back on Friday at growing criticism by Western powers of its treatment of ethnic minorities in Xinjiang.

“The facts show that there has never been any ‘genocide’ in Xinjiang,” Wang told reporters at a regular briefing.

Chinese Foreign Minister Wang Yi also said on Monday that “there has never been so-called genocide, forced labour, or religious oppression in Xinjiang.”

At Friday’s event, Bachelet also pointed out that China is restricting basic civil and political freedoms in the name of national security and COVID-19 measures, adding to a wave of criticism of the country’s rights record.

More than 600 people in Hong Kong are being investigated for taking part in protests, some under the new national security law imposed by mainland China on the former British colony, she said.

Hong Kong Secretary of Justice Teresa Cheng told the Geneva forum that since the law was adopted, civil unrest had subsided and residents can enjoy their lawful freedoms.