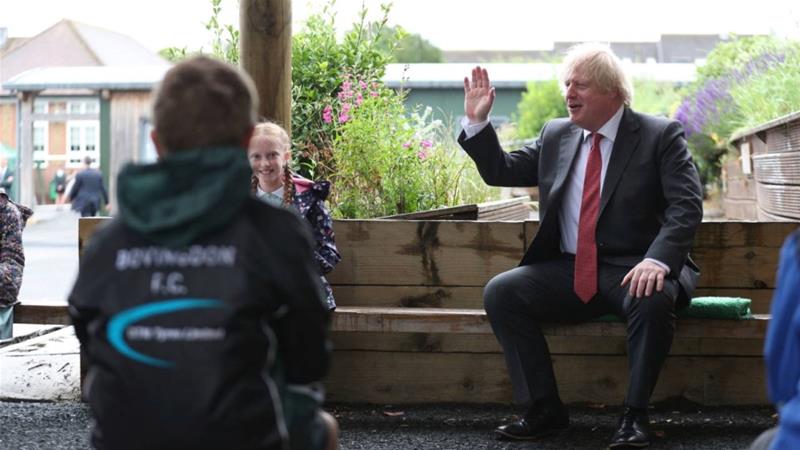 Much of the new spending will be directed at those areas in northern and central England that had traditionally supported the main opposition Labour Party but backed Johnson during the last election [File: Steve Parsons/AP]

Prime Minister Boris Johnson will set out plans for a 10-year rebuilding programme for schools in England on Monday, part of government efforts to help the United Kingdom "bounce back" from the coronavirus crisis.

Much of the new spending will be targeted at those areas in northern and central England that traditionally supported the Labour Party, but switched allegiance to the Conservatives at last December's election helping the party return to power with a large majority.

Rebuilding schools, which have suffered from government cuts in the wake of the 2009 financial crisis, will be his first step, with funding targeted at the buildings in the worst condition in England, especially in northern and central regions.

"As we bounce back from the pandemic, it's important we lay the foundations for a country where everyone has the opportunity to succeed, with our younger generations front and centre of this mission," Johnson said in a statement.

The rebuilding programme will start in 2020-2021 with the first 50 projects and will be supported by more than one billion pounds ($1.23bn) in funding, the government said. Three-quarters of the budget will go to repairs and upgrades to schools and further education colleges, respectively, this year.

It said the 560 million pounds ($615m) for school repairs and upgrades was on top of more than 1.4 billion pounds ($1.73bn) in school condition funding committed in 2020-21, and that the 200 million pounds ($247m) would bring forward plans first announced by the finance minister.

"This major new investment will make sure our schools and colleges are fit for the future, with better facilities and brand new buildings so that every child gets a world-class education," Johnson said.