Trump has barred US investments in Chinese firms with military ties as relations between the two countries worsen.

The NYSE’s move is a significant reversal of its decision that followed US President Donald Trump’s executive order barring investments by US entities in Chinese firms with military ties. The NYSE’s initial decision had threatened to worsen already tense relations between the two superpowers.

It was the first time an American exchange had announced plans to remove a Chinese company as a direct result of rising geopolitical tensions between the US and China.

The exchange said in a statement published on its website that it made the decision “in light of further consultation with relevant regulatory authorities”.

It added that it will “continue to evaluate the applicability of [the executive order] to these Issuers and their continued listing status”.

The NYSE said last week it would delist the three companies following the US government’s move in November to block investment in 31 firms deemed to be owned or controlled by the Chinese military.

Hong Kong-listed shares in the three firms surged on the announcement, with China Unicom up 9 percent, while China Mobile and China Telecom each gained 7 percent. 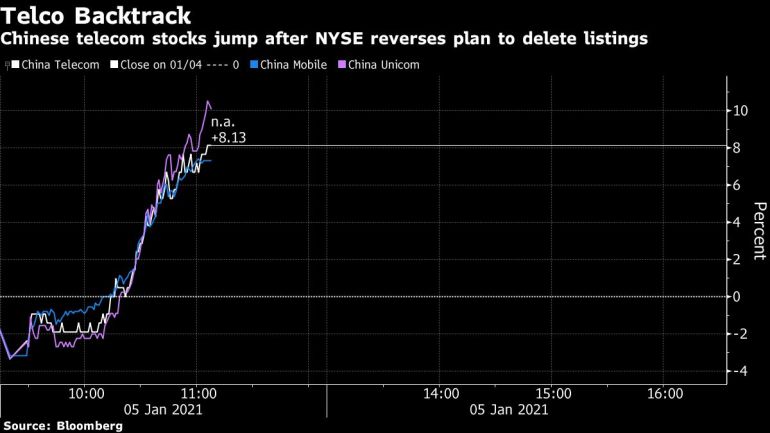 China Unicom said it planned to issue a statement later in the day. Representatives for China Mobile and China Telecom were not immediately available for comment.

China’s foreign ministry had called the planned delisting of the three companies “unwise” and denounced what it said were “random, arbitrary and uncertain” rules.

The move to delist the shares had heightened concerns about tit-for-tat sanctions on Chinese and American companies.

Chinese firms have turned to the US stock market for capital and international prestige for more than 20 years, raising at least $144bn from some of the world’s largest investors.

Wall Street banks are particularly keen to see a ratcheting down of tensions after gaining unprecedented scope to operate in China last year.