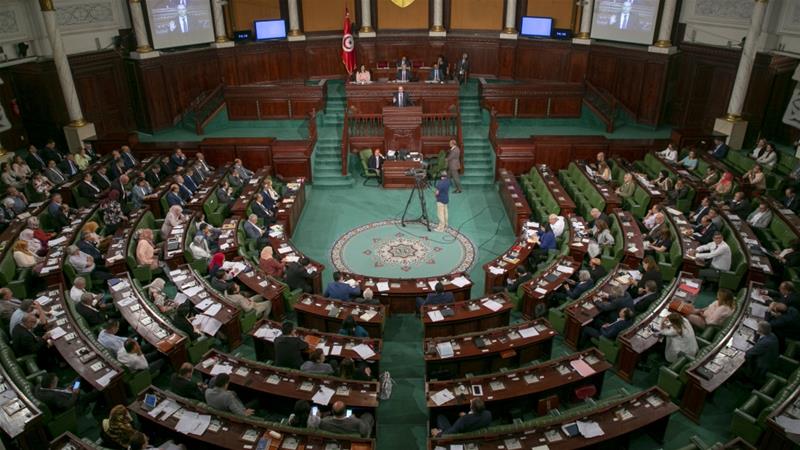 Fakhfakh has promised to step down if investigators find wrongdoing [File: Anadolu]

Ennahdha, the biggest party in Tunisia's parliament, has decided to withdraw its support from the government of Prime Minister Elyes Fakhfakh, a senior party official told Reuters news agency.

"We adopted the option to withdraw confidence from the prime minister and mandate the party leader to follow up on the implementation of the decision'", Imed Khmiri said on Wednesday.

Ennahdha, which holds 54 of Parliament's 217 seats, would need to secure the backing of at least 109 legislators in a vote of confidence to bring down the government.

In recent days, the self-described Muslim democratic party has increasingly voiced its disapproval of Fakhfakh over allegations of conflicts of interest involving him.

Last month, an independent member of parliament published documents indicating that the prime minister owned shares in companies that had won deals worth 44 million dinars ($15m) from the state.

A judge has opened an investigation, and the anti-corruption minister has assigned a public watchdog to look into the issue and report back.

Fakhfakh denies he did anything improper or corrupt, saying he had sold his shares in the companies. However, he promised to step down if investigators find wrongdoing.

The prime minister was sworn in in February after winning a confidence vote in Parliament following four months of post-election deadlock. Ennahdha had initially said it would reject Fakhfakh's proposed government over its exclusion of some parties, but it later walked back on its position following a minor reshuffle.

In a sign of the turbulence shaking the fragile coalition, Fakhfakh on Monday said he will announce a cabinet reshuffle in the coming days, a move that analysts say will see Ennadha's seven ministers removed from their posts.

Separately, the government said on Monday it asked four countries to delay debt repayments, as it announced more pessimistic economic and budget forecasts for 2020 because of the coronavirus pandemic.

The request for payment rescheduling underscores the dire condition of Tunisia's public finances, already a source of concern before the coronavirus crisis pummelled the global economy.