For months, Tony Green believed the conspiracy theories. The coronavirus was a hoax masterminded by the “mainstream media” and the Democratic Party to bring down United States President Donald Trump ahead of the presidential election, he thought.

But then the 43-year-old from Dallas, Texas, got sick, as did 14 members of his extended family after he hosted a get-together in June. Two of his relatives, aged 52 and 69, later died from COVID-19.

“I fell victim into believing that the virus didn’t exist,” Green told Al Jazeera in a phone interview.

The US president has frequently sought to minimise the seriousness of COVID-19 since the first case was reported in the US in January.

Trump has often contradicted the medical advice of the country’s top health experts and eschewed mask-wearing, which helps to limit the spread of the virus. The president has also repeatedly claimed that the virus would “go away” and pushed for states to prioritise reopening parts of their economies.

“I wish Trump had shown more integrity and honesty,” said Green. “His comments were irresponsible. The pandemic shouldn’t have ever been politicised. I didn’t take it seriously. I feel like the drunk driver who killed his passengers. I feel responsible, as I hosted the event.”

Green is among more than eight million people who have tested positive for COVID-19 in the US since the outbreak began  – including the US president himself, who was hospitalised for a brief period in early October after contracting the disease.

The country has since reported record-high daily numbers and weekly average numbers of cases, amid a surge in parts of the Midwest, and the death toll has passed 227,000, according to a Johns Hopkins University tally.

Since his diagnosis, Trump has claimed, without evidence, that he is now “immune” to the deadly virus, but some Americans who have been infected or whose family members have died see those comments as patronising and insulting.

National polls show a majority of Americans disapprove of Trump’s handling of the pandemic, which could prove costly for the Republican candidate ahead of Election Day on November 3. In a recent national poll on key election issues, 77 percent of registered voters said the candidates’ positions on the response to the coronavirus were “extremely” or “very” important. 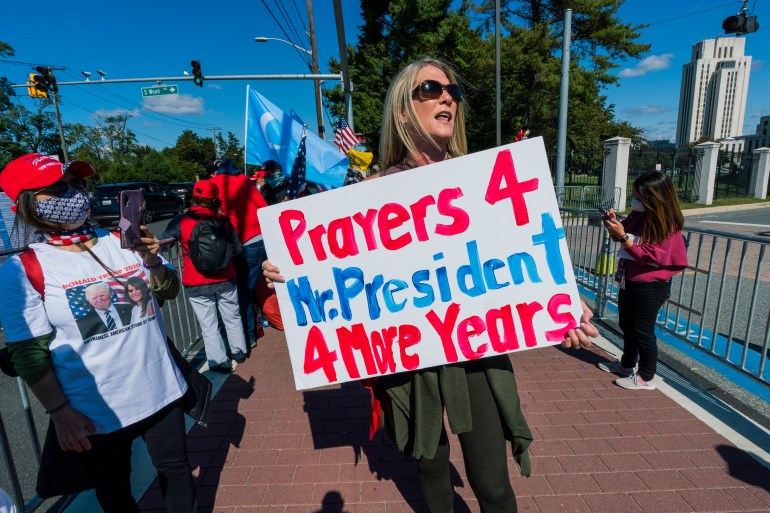 Supporters of President Donald Trump gather outside the Walter Reed National Military Medical Center in Bethesda, Maryland, where Trump was treated for COVID-19 [File: Manuel Balce Ceneta/AP Photo]Richard Parr, Research Director at The MassINC Polling Group, which is based in Boston, Massachusetts, said Trump’s response to the pandemic is partly to blame for his poor polls.

“Most national and state polls show that the majority of people disapprove of Trump’s handling of the pandemic. Of course, it’s split among party lines. However, independent voters are leaning towards the Democrats. Also, the number of coronavirus cases in swing states like Ohio, Wisconsin and Michigan are increasing, which isn’t good for Trump,” Parr told Al Jazeera in a phone interview.

Marco Reyes believes his father, 84-year-old Jose, would still be alive today if Trump and Florida Governor Ron DeSantis had not downplayed the threat of the novel coronavirus.

Jose, a longtime Republican Party supporter who lived in Miami, died in early September from COVID-19 after he was placed on a ventilator in hospital.

More than 16,500 people have died from the coronavirus in Florida, which has reported over 780,000 infections – one of the worst tallies in the country.

“I hold DeSantis and Trump accountable for his death,” Marco told Al Jazeera in a phone interview, saying he believes the governor reopened the state too quickly while Trump “downplayed the threat of the disease”.

“Their actions influenced my father to take a more relaxed approach,” he said. 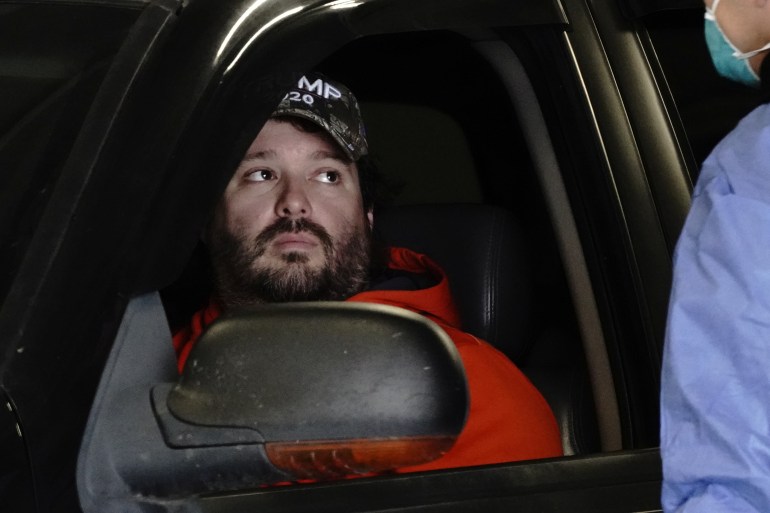 A Trump supporter listens to a health worker after having his nasal swab taken at a drive-through testing site as the coronavirus disease (COVID-19) outbreak continues [File: Bing Guan/Reuters]Still, thousands of Trump supporters have attended in-person events since the president returned to the campaign trail on October 12 after his doctors cleared him.

Despite his own experience with contracting the virus, Trump has continued to hold rallies, where many attendees have been pictured not wearing masks, and he has continued to downplay the seriousness of COVID-19.

Covid, Covid, Covid is the unified chant of the Fake News Lamestream Media. They will talk about nothing else until November 4th., when the Election will be (hopefully!) over. Then the talk will be how low the death rate is, plenty of hospital rooms, & many tests of young people.

“I feel so powerful. I’ll walk in there, I’ll kiss everyone in that audience. I’ll kiss the guys and the beautiful women, just give you a big fat kiss,” Trump said during a recent rally in Florida.

Scott Lucas, a professor of International Politics at the University of Birmingham in the United Kingdom, said Trump had not modified his messaging around the virus due in part to his own ego.

“Firstly, Trump’s driven by his ego, which has been laid bare since he contracted COVID-19 and survived. Secondly, the Trump administration is pushing for herd immunity, which the White House Chief of Staff, Mark Meadows, has effectively said. That’s the route preferred by Trump’s coronavirus adviser, Scott Atlas, who isn’t a qualified epidemiologist and has no expertise in this area,” Lucas told Al Jazeera over the phone.

“Trump doesn’t calculate. He simply asserts that something should be a certain way and conducts himself as if it is. He has tremendous self-belief, which we need to treat accordingly,” he said.