President Trump has retweeted a video featuring a supporter shouting "white power" at other demonstrators in Florida.

The footage shows a man in a golf cart that includes "Trump 2020" and "America First" signs responding to protesters who were also shouting and carrying placards expressing their opposition to the president.

According to the person who originally posted the video, it was recorded in a retirement community known as The Villages where the residents were apparently "protesting against each other" - the Trump supporters apparently in a parade of golf carts and the others standing beside this parade. 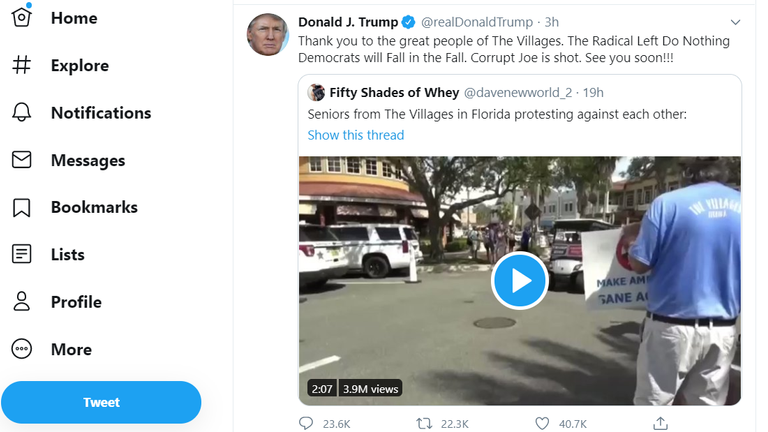 "White power" is a white supremacist political slogan designed to mimic the "black power" slogan which became popular during the civil rights movement, said the Anti-Defamation League in the US.

Three hours after it was posted, the president's message apparently endorsing the supporter who shouted this term was deleted.

Before it was deleted, the president's tweet thanked "the great people of The Villages" stating: "The Radical Left Do Nothing Democrats will Fall in the Fall. Corrupt Joe is shot. See you soon!!!"

The tweet was criticised by Republican senator Tim Scott, who told CNN's State of the Union: "There's no question. He should not have retweeted it and he should just take it down."

Senator Scott, who is the only black Republican in the US Senate, added: "We can play politics with it or we can't. I'm not going to.

"I think it's indefensible, we should take it down. That's what I think."

It is not clear whether Twitter deleted the message - which didn't appear to violate its standards - or if it was deleted by the president or his team.

The social media company and the Trump administration have repeatedly clashed over the president's tweets in recent weeks, prompting the White House to drive forward changes to social media regulations.

The original video - which documents both groups of demonstrators shouting at each other, with the counter-Trump protesters audibly swearing - remains available on Twitter.