Donald Trump’s election campaign rallies have been linked to tens of thousands of COVID-19 cases and hundreds of deaths, a Stanford University report found, as the United States president continues to hold large events just three days before the November 3 vote.

Released on Friday, the report by Stanford economics department researchers examined COVID-19 infection rates in 18 places across the country where Trump held campaign rallies between June 20 and September 30.

It then compared the post-rally infection rates in those counties with COVID-19 case rates in 18 comparable counties where rallies were not held.

The rallies “ultimately resulted in more than 30,000 incremental confirmed cases of COVID-19” and “likely led to more than 700 deaths”, the researchers found.

Those deaths were not necessarily people who attended the rallies, the study explained, but were connected to cases that stemmed from the events.

“Our analysis strongly supports the warnings and recommendations of public health officials concerning the risk of COVID-19 transmission at large group gatherings,” the report stated. “The communities in which Trump rallies took place paid a high price in terms of disease and death.”

Amesh Adalja, an infectious diseases expert at the Johns Hopkins Center for Health Security, described the report as “suggestive”.

“I would just say it’s suggestive but hard to completely isolate the specific impact of one event without robust contact trace data from the cases,” Adalja told Reuters News Agency.

Trump’s campaign did not immediately respond to Reuters’ request for comment on the report.

The US has recorded the world’s highest number of COVID-19 cases since the pandemic began, registering more than nine million infections to date, as well as more than 230,000 deaths linked to the novel coronavirus, according to a Johns Hopkins University tally.

Several states across the country are currently fighting a surge in cases, as well as a dramatic increase in hospitalisations, and both Republican and Democratic legislators in hard-hit areas are urging people to stay home to stem the spread of the virus.

Despite these realities, Trump has continued to downplay the threat of COVID-19, insisting that the pandemic is “rounding the turn” and falsely claiming that the number of new cases is, in fact, decreasing nationwide.

During a campaign rally in Pennsylvania on Saturday, Trump mocked his Democratic Party challenger Joe Biden for criticising his administration’s handling of the pandemic.

“I watched Joe Biden speak yesterday. All he talks about is COVID, COVID. He’s got nothing else to say. COVID, COVID,” Trump told the crowd.

The president on Friday also suggested that doctors are inflating the US’s coronavirus death count for monetary gain – another false claim that drew ire from the country’s largest group of physicians and medical students, the American Medical Association (AMA).

“Our doctors get more money if somebody dies from COVID. You know that, right? I mean our doctors are very smart people. So, what they do is they say, ‘I’m sorry but everybody dies of COVID,'” Trump told a rally in Michigan, without citing any evidence. 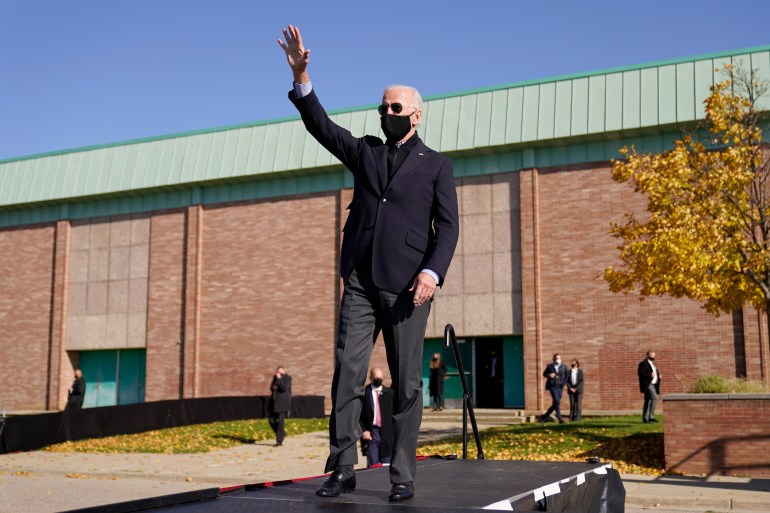 “Rather than attacking us and lobbing baseless charges at physicians, our leaders should be following the science and urging adherence to the public health steps we know work – wearing a mask, washing hands and practicing physical distancing,” the group said in a statement.

Biden on Saturday also slammed the president’s assertion about the doctors.

“What in the hell is wrong with this man? Excuse my language. But think about it. He may believe it because he doesn’t do anything other than for money,” Biden told a drive-in rally in Flint, Michigan, alongside former President Barack Obama.

The Biden campaign said Saturday that the Stanford University report’s findings demonstrate that Trump “doesn’t even care about the very lives of his strongest supporters”.