Trump call is the latest episode in growing rift with Republicans

Throughout his presidency, Donald Trump has demanded loyalty from fellow Republicans and most repeatedly obliged. However, in recent weeks, as Trump has aggressively attempted to overturn the election results, his actions have caused previously supportive Republicans to actively push back.

The most significant example is Sunday’s release of a recording of Georgia Secretary of State Brad Raffensperger’s Saturday telephone call with Trump, in which the president is heard urging him to help “find 11,780 votes” – the number Trump would need to defeat President-elect Joe Biden in Georgia – and suggesting “there’s nothing wrong with saying … that you’ve recalculated”.

Prior to the leak of the call, Raffensperger rebutted the president’s characterisation of their conversation on Twitter saying: “Respectfully, President Trump: What you’re saying is not true. The truth will come out.”

Respectfully, President Trump: What you're saying is not true. The truth will come out https://t.co/ViYjTSeRcC

Raffensperger, a Republican who strongly supported Trump’s election and re-election, has been the target of Trump’s ire since November’s election and has been criticised by the president for not investigating various unfounded rumours and claims regarding the voting in Georgia.

Raffensperger told the president on Saturday’s call and repeated on Monday that Georgia officials and investigators have debunked those rumours, to Trump’s disbelief.

“Did you consider it a lawful request when the president asked you to find the votes?” Raffensperger was asked by ABC’s George Stephanopoulos during an interview on Monday morning.

“I’m not a lawyer. All I know is that we’re gonna follow the law, follow the process. Truth matters, and we’ve been fighting these rumours for the last two months,” Raffensperger said. 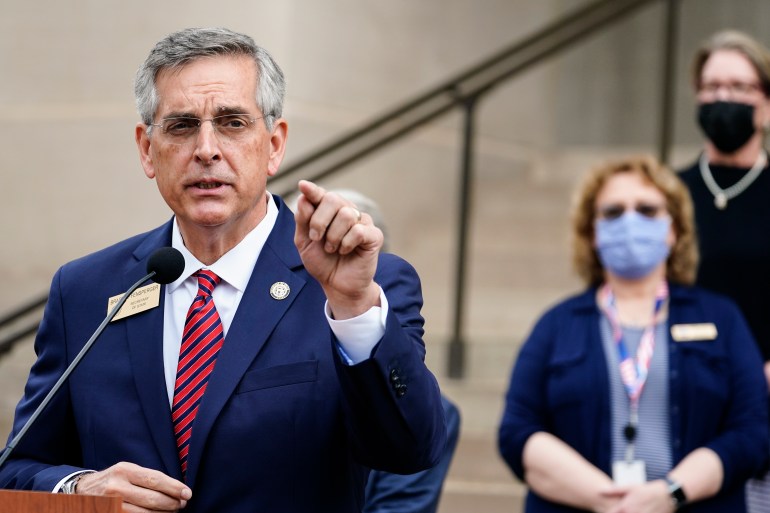 Georgia Secretary of State Brad Raffensperger, a Republican and a Trump supporter, has faced Trump’s ire since his election loss to Joe Biden [File: Brynn Anderson/AP Photo]This episode is the latest example of Republicans publicly standing up to Trump, many of whom are now speaking out as Trump is encouraging his supporters to challenge the election results during Congress’s ceremonial vote tally on Wednesday. He is also fanning the flames of protests in the streets of Washington, DC during that tally.

At least 12 Republican senators and 140 House members – far from an overall majority – have said they will vote to object the electoral votes of certain states on Wednesday, effectively slowing down the tally and lodging a procedural protest. Their efforts are not expected to prevent Congress from completing its count and marking the final step in Biden’s path to inauguration on January 20.

Senate Majority Leader Mitch McConnell, who has carried Trump’s water legislatively the past four years, is opposed to the objectors’ plan and has warned his party’s senators not to slow the process down. Missouri Senator Josh Hawley last week was the first Republican to defy McConnell’s wishes, with others, led by Texas Senator Ted Cruz, following suit.

Elected Republicans find themselves in a political quandary as standing up to Trump results in sharp rebukes, insults and threats from the president that he will support intraparty challengers to his critics.

The “Surrender Caucus” within the Republican Party will go down in infamy as weak and ineffective “guardians” of our Nation, who were willing to accept the certification of fraudulent presidential numbers!

With polls showing a large majority – three-quarters in some polls – of Republican voters raising questions about the legitimacy of Biden’s victory, some are accusing pro-Trump Republicans of acting out of self-interest and not in the best interest of the country.

“The egregious ploy to reject electors may enhance the political ambition of some, but dangerously threatens our Democratic Republic,” outspoken Trump critic Mitt Romney, a Republican senator from Utah, said in a statement on Sunday.

But as Trump faces his final two weeks in office, more key Republicans are speaking out against the president – not just members of Congress, but other prominent Republicans as well.

“The 2020 election is over. All challenges through recounts and appeals have been exhausted,” the statement reads. “At this point, further attempts to cast doubt on the legitimacy of the 2020 Presidential election are contrary to the clearly expressed will of the American people and only serve to undermine Americans’ confidence in the already determined election results.”

I joined a bipartisan group of Senators in issuing the following statement on the upcoming Congressional certification of the 2020 Presidential election results: pic.twitter.com/UzcQaaH8mV

As Congress kicked off its new term on Sunday, Texas Representative Chip Roy, who once worked for Cruz, called out fellow Republicans, demanding that those from states where they are contesting election results not be seated.

Roy argued, “those representatives were elected through the very same systems — with the same ballot procedures, with the same signature validations, with the same broadly applied decisions of executive and judicial branch officials — as were the electors chosen for the President of the United States under the laws of those states, which have become the subject of national controversy.” Roy’s idea was rejected, but his action was notable in its dissent from the Trump party line.

“The time for questioning the results has passed; the time for the formal counting of the electoral college votes, as prescribed in the Constitution and statute, has arrived,” the secretaries wrote, adding that “efforts to involve the US armed forces in resolving election disputes would take us into dangerous, unlawful and unconstitutional territory”.