Twenty-nine tonnes of carrots have been dumped outside a London university as part of an art project highlighting food wastage.

Grounding, a piece by Spanish-Welsh artist Rafael Perez Evans, was installed by a large lorry outside the Ben Pimlott building at Goldsmiths College in New Cross, part of the University of London.

The artist said the vegetables, which will eventually be collected as animal feed, were rejected by supermarkets. 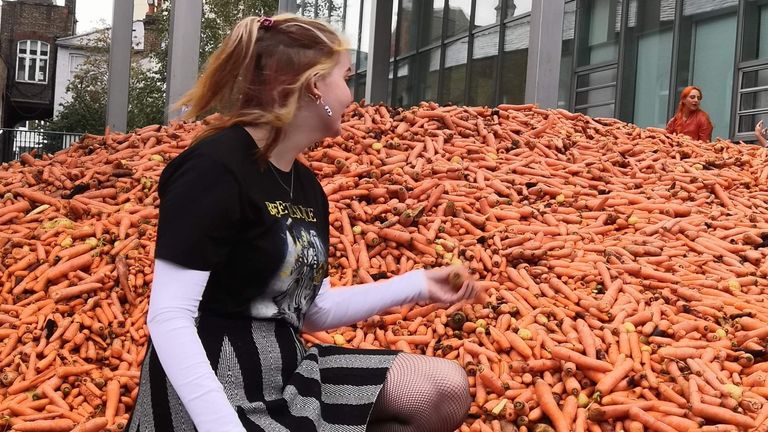 Image: They were dropped as part of an art installation

Since its installation on Tuesday, many students were seen climbing the orange pile to take photos and some took carrots home to eat.

"But I knew this is very Goldsmiths, and all that was left was to understand what it meant," she said.

According to Mr Perez Evans's website, the artwork explores "the tensions in visibility between the rural and the city", and was inspired by European farmers dumping produce as a protest.

"The therapeutic technique of grounding involves doing activities that 'ground' or electrically reconnect you to the earth," he added.

Many students said they felt torn about the dumping of so much edible food, despite supermarkets not wanting them.

"Even though the carrots are being donated to farm animals at the end of the piece, it's still slightly problematic given the poverty, food shortages and homelessness in Lewisham," said Lester Langford, 20, who is from Warwickshire and studies history.

"It was something so fun and bizarre to go and see... but also it's hard not to acknowledge the glaring problems with food wastage," the 20-year-old said.

"However, this food was likely to be wasted anyway... so by using them for this project people are suddenly thinking about food wastage and the amount that doesn't make it to supermarkets to be sold.

"It's certainly an interesting way to gain attention for a social cause."