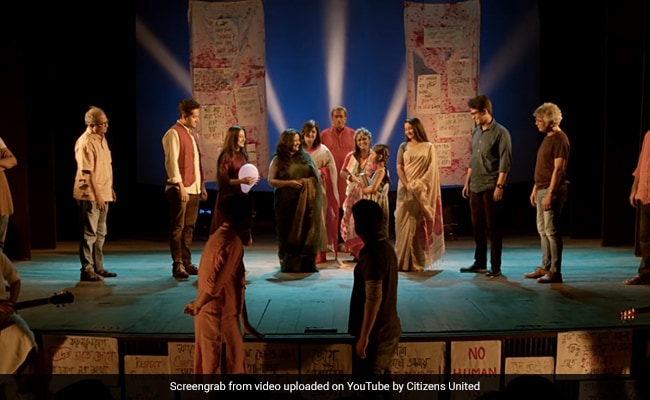 The song was released by an artistes' collective called 'Citizens United'

It's not for West Bengal's ruling Trinamool Congress nor is it for the Left-Congress combine and yet the six-minute song released two days before the state goes to vote leaves little doubt who and what it is against.

The BJP or its ideological mentor Rashtriya Swayamsevak Sangh (RSS) are not named even once but with frequent references to their catchphrases "Achhe Din", "Go To Pakistan", "Anti-National", "Urban Naxal" and "Tukde Tukde Gang", the song minces no words to call out intolerance and hatred.

"You're here to invade, you know nothing of patriotism," says one of the lines in the song while another says, "All your explanations begin and end with Pakistan". References to the Nazis, their atrocities and their propaganda also make the cut.

Uploaded to YouTube by a channel called "Citizens United", the song is credited as a joint effort by noted Bengali musicians, actors and filmmakers and features celebrities like Sabyasachi Chakraborty, Parambrata Chattopadhyay, Anupam Roy, Anirban Bhattacharya among others.

The famous 'Chinese Kali Mandir' in Kolkata's Tangra area, the street-side Haleem vendors in front of the city's majestic Nakhoda Masjid are among the Easter eggs in the music video that highlight Bengal's rich history of tolerance and pluralism.

The song also leans on headlines of growing unemployment, rising fuel prices, India trailing Pakistan in the Global Hunger Index to hit out at Prime Minister Narendra Modi's administration as well as features protests against the centre's new citizenship law, the National Register of Citizens and the farm laws.

Released around midnight on Thursday, the song had collected over 75,000 views by the evening and drew kudos on social media.

I love you West Bengal. Imagine a song like this from Other film industries in India. But fuck no.... https://t.co/LuJ5TnSsbW

You'll get goosebumps watching this even if you don't know Bangla. Watch till the end. Some of the biggest names in Bengali music and cinema here, I'm told. An absolutely independent effort with no connections to TMC or CPM. https://t.co/kONerJcnRT

Bengal artists unite against politics of hatred in this beautiful song.

My heart is full, my eyes in tears. Thank you, THANK YOU for this.

Art is dissent, and dissent we must.https://t.co/NmoVG9mX11

Goosebumps. Bengal's top actors and actresses come up with an appeal to reject hatred. Good to see some people still having spine.

One of the most powerful songs to have come up in this election. https://t.co/izxAoSsvqT

West Bengal goes to vote in record eight phases starting Saturday. Results are set to be declared on May 2. Mamata Banerjee faces a stiff challenge from the BJP that has pulled out all stops to unseat the two-time Chief Minister while long-time rivals Left and the Congress have joined forces to pitch a third front.

The bitter campaigning has earlier seen a head-to-head between the Trinamool's anthem "Khela Hobe" (Game On) and the BJP's cover of the famous Italian communist song Bella Ciao dubbed "Pishi Jao" (Aunty, Go) besides a smattering of other jingles and tunes.