Kasabian frontman Tom Meighan has told Sky News he has been working on solo material while in lockdown - but assured fans that the band is "still solid".

The singer, from Leicester, says he has been writing his own music for years but has been focusing on it more while at home due to the coronavirus crisis.

Last year, Kasabian took their first extended break after six albums and more than 20 years together, with songwriter Serge Pizzorno releasing his first solo record as The SLP. 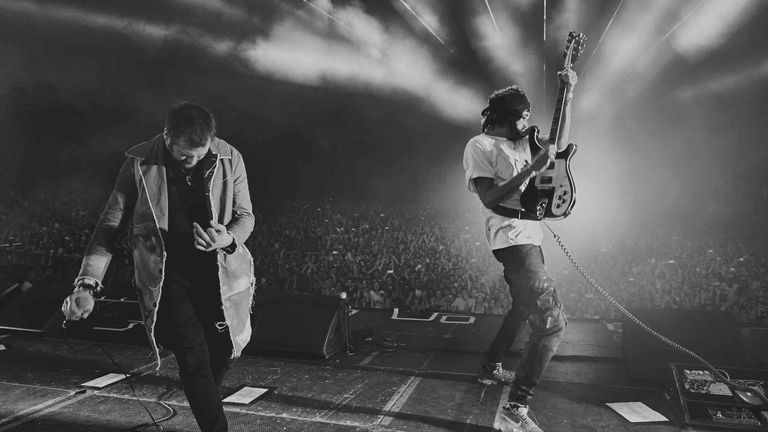 More recently, the band had been planning their seventh album, but the COVID-19 outbreak has postponed things for a while.

So Meighan says he has been keeping himself by writing at home, and describes his songs as "like a diary".

"I'm writing loads of music at the minute," he says. "We'll see what happens. I've got a few cookies in the jar... and they're not bad, you know.

"It's very autobiographical, like the story of my life. It's kind of... heartbreaking. Well, not heartbreaking, just to the core, you know. Very real."

When Pizzorno released his solo album last year, fans were concerned it might mean the end for Kasabian.

Meighan is quick to say how proud he is of his bandmate, and that a split is definitely not on the cards.

"When Sergio did his thing last year, everyone was like, 'how do you feel about it?' I love it! Why wouldn't I? His music was incredible...

"He's doing his thing, I'm doing mine but Kasabian are still solid. You know, it's just a bad time at the moment, for rock 'n' roll. For human beings in general."

The singer says he has been writing his own material for years.

"I'm logging my life, like a diary. I think [the songs] are all right. We'll see what happens."

On Saturday night, Kasabian should have been playing a big comeback gig at Victoria Park in Leicester, a homecoming show to mark their return, and their only planned UK performance for 2020.

They last performed at the park in 2016, for the victory parade when their beloved Leicester City beat the 5,000-1 odds to win the Premier League.

While the band are "absolutely heartbroken" to have had to cancel this year's show, Meighan is still connecting with fans by taking part in an online Q&A session instead.

An Evening With Tom Meighan, hosted by Clint Boon, starts at 8pm on Saturday here.