Celebrating America, which aired across the US on multiple channels simultaneously as well as online, ushered in a new era as Donald Trump left office, highlighting the strength of unity in trying times.

With a guest-list including Hollywood royalty, musical legends and pop favourites, Sky News takes a look back at the best bits of the starry show. "The Boss" opened the night with what he called "a prayer for our country", singing Land Of Hope And Dreams with his acoustic guitar on the steps of the Lincoln Memorial.

The 71-year-old joked about the coldness of the night in Washington DC, before belting out the rock number, celebrating new beginnings.

Poignant lyrics include: "Leave behind your sorrows, Let this day be the last, Tomorrow there'll be sunshine, And all this darkness past." 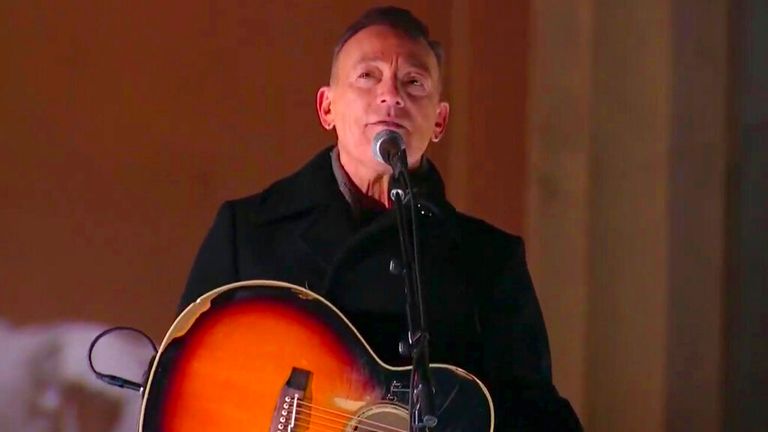 The Oscar-winning star was host for the evening, dressed in a dark suit and hitting a suitably sombre tone as he began proceedings.

Offering sage remarks on the recent "deep divisions and a troubling rancour" in America, the 64-year-old looked forward to Joe Biden's presidency promising that "the dream of America has no limit."

Someone please get Tom Hanks a coat and a mug of hot cocoa.

But despite his wise words, many viewers were more concerned about Hanks' welfare than his speech, calling for the star - who battled COVID-19 last year - to "put on a warm coat".

One witty Twitter-user joked that despite famously playing a ship wreckee Chuck Noland in 2000 film Cast Away, the actor was now facing hyperthermia in the middle of Washington DC. 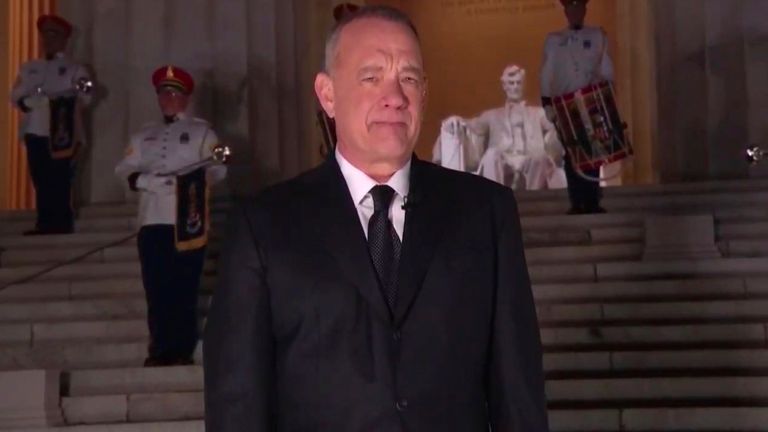 Rocker Bon Jovi channelled The Beatles, with an acoustic version of their classic Here Comes The Sun.

The 1969 hit was performed with a violin, guitar and jaunty tambourine at the end of a sunny wooden pier in Miami.

Bon Jovi had already shared his excitement over being asked to perform at the event, tweeting: "I am very honored to be part of the Presidential Inauguration tomorrow alongside so many incredible people." 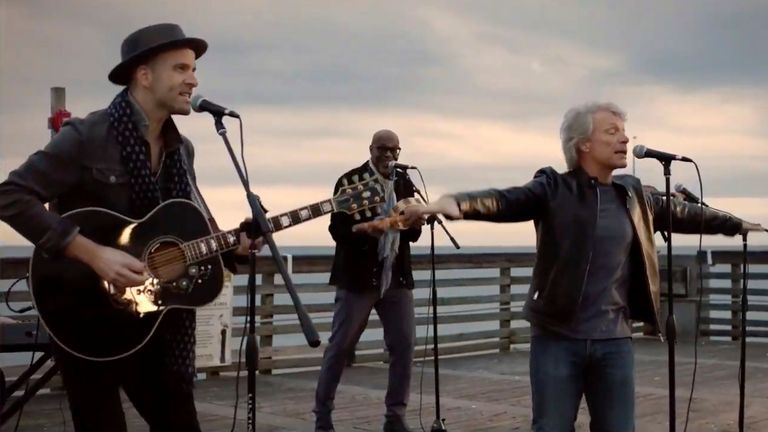 The new dad performed his inauguration tribute with the help of singer-songwriter Ant Clemons, with the pair performing Better Days.

Taking to the street outside Stax Records in Memphis, Tennessee, they were backed by a socially distanced band and gospel choir.

Despite welcoming his second child with wife Jessica Biel just days ago, a sprightly looking Timberlake led the way through the empty city streets belting out the duet and busting a few moves to boot. 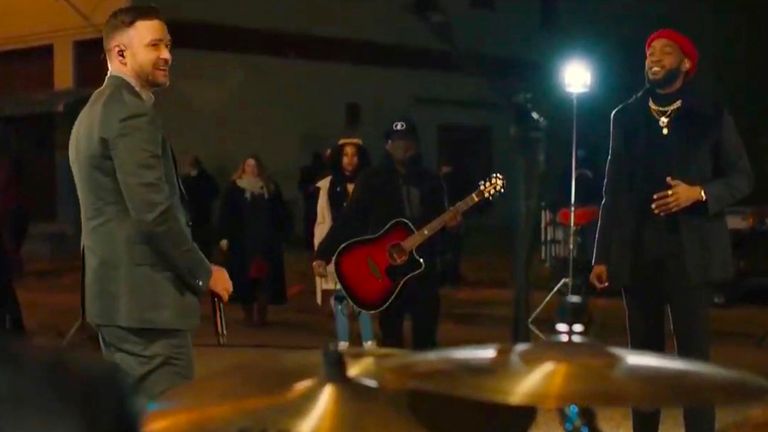 Foo Fighters lead singer Dave Grohl dedicated the band's song - Times Like These - to his mother Virginia Grohl, who was a public school teacher for 35 years.

The singer paid tribute to the profession, saying: "This year our teachers were faced with unprecedented challenges, but through dedication and creativity they faced those challenges head on."

The moody tune was performed in front of a deep purple backdrop, before rocking up a storm and delivering a mosh-worthy guitar solo and drum finale. 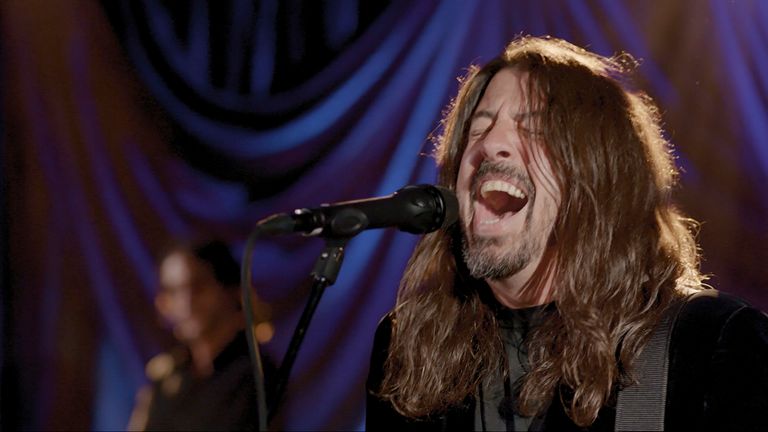 Image: Dave Grohl rocked out and payed tribute to his mum. Pic: AP

Performing from New York, the Hamilton creator and Mary Poppins star read a poem as his contribution to the show.

The line "believe in miracles" shone through, with the voice of Mr Biden joining in with the actors for the end of the rendition. Image: Lin-Manuel Miranda got poetic with a bit of help from Biden. Pic: AP

Kicking off acapella in front of the Lincoln Memorial, Legend accompanied himself on the piano to perform Nina Simone's 1965 classic Feeling Good.

The 43-year-old was backed up by a big band and belted out the Broadway classic.

Presenter Chrissy Teigen - who recently shared her excitement over being followed by the official @POTOS Twitter account - was there to support her husband, with their children Luna and Miles.

She was backed up by a host of doctors and nurses, who played instruments and danced on a large screen behind her as she sang.

The upbeat number got Mr Biden and his family on their feet in the White House, as they watched it on a TV in front of a roaring fire.

Lovato later tweeted calling it an "inspiring night" she would "never forget".

A stately-looking Perry rounded off the evening, performing her 2010 hit Fireworks on the steps of the memorial.

Dressed in a cream floor-length gown, fireworks illuminated the entire sky behind her as she sang.

The new-mum was cheered on by her fiance, actor Orlando Bloom, who ran up to give her a kiss as she finished her song, telling her: "That was amazing". Image: Katy Perry gave the Celebrating America show a bit of a bang - with Orlando Bloom cheering her from the sidelines. Pic: AP

Gaga led the way singing the US National Anthem - while wearing a dove brooch the size of an actual dove - and Lopez sang a medley of This Land is Your Land and America the Beautiful in a cream outfit dressed up with diamonds and pearls. 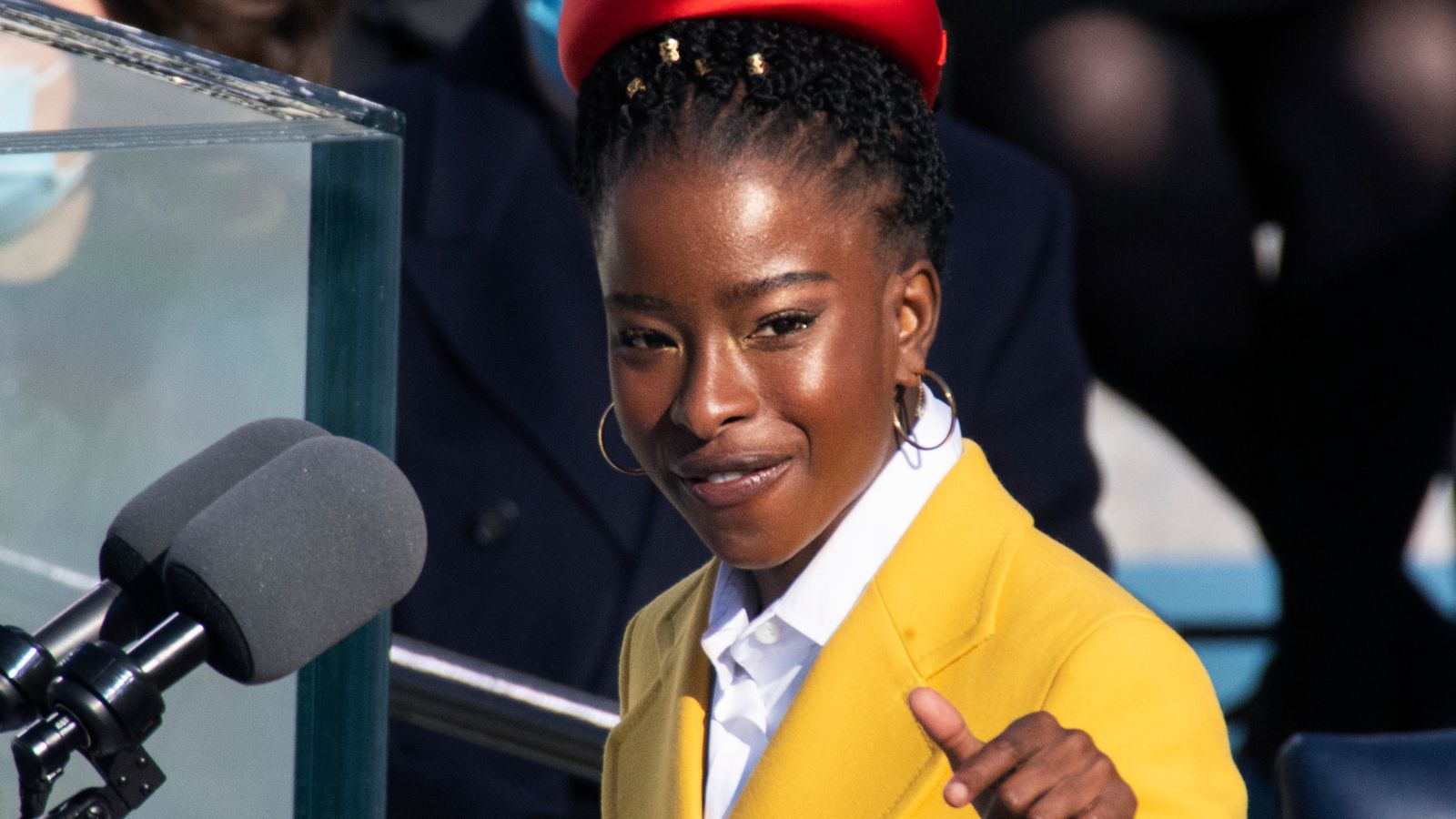 'She's not a bully': Meghan's friends hit back at claims ahead of Oprah interview 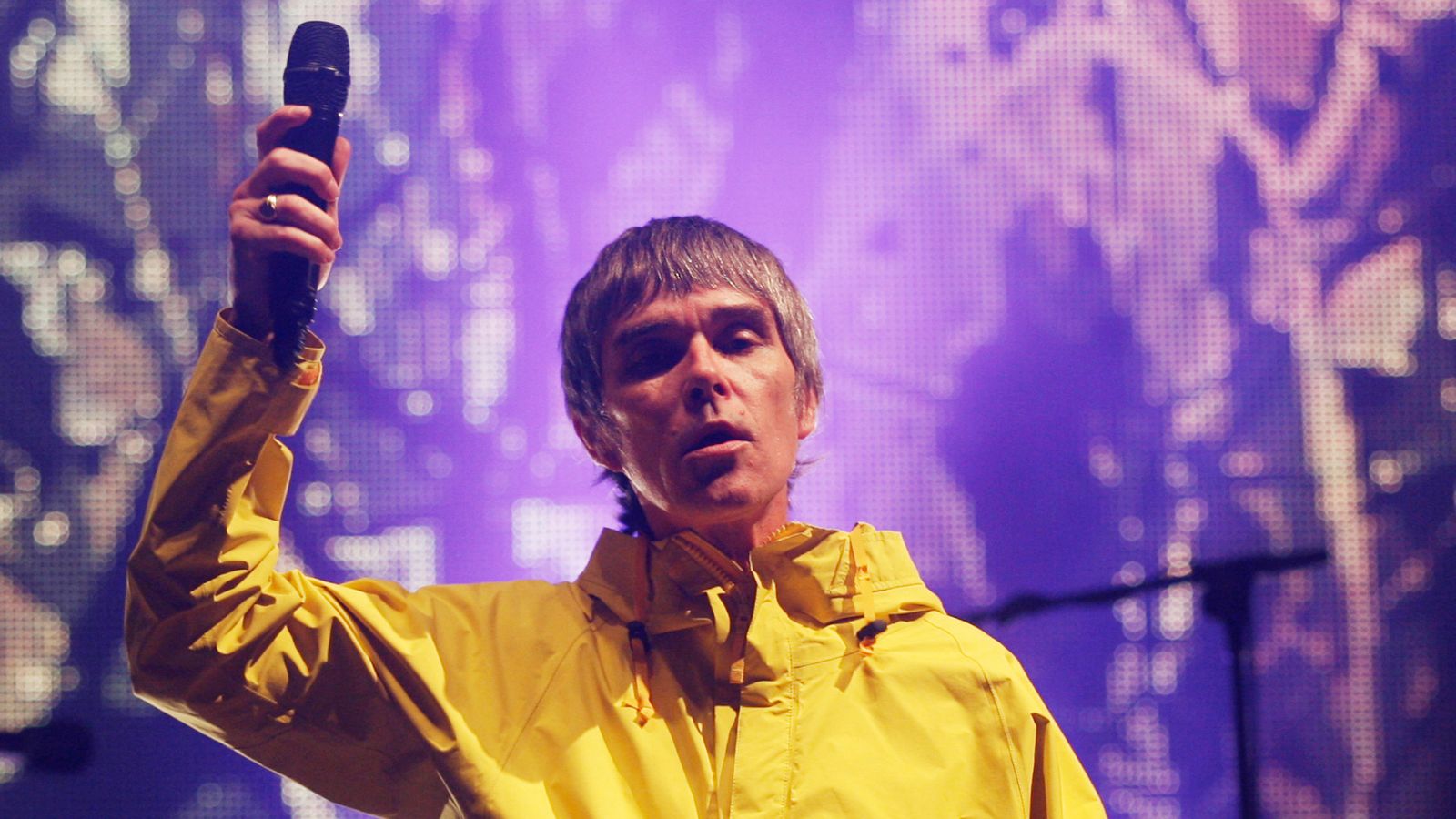