Timeline of the murder of journalist Jamal Khashoggi

Khashoggi, a columnist for the Washington Post who wrote critically of the crown prince and his policies, was murdered by a team of Saudi agents in the kingdom’s consulate in Istanbul in October 2018. His dismembered body has never been recovered.

The Saudi crown prince has denied involvement and Riyadh has blamed the event on rogue operatives. Previous investigations, notably by Agnes Callamard, the UN special rapporteur on extrajudicial, summary or arbitrary executions, have concluded the order likely came from highest levels of the Saudi government.

The report concurs with those findings saying that:  “Since 2017, the Crown Prince has had absolute control of the Kingdom’s security and intelligence organizations, making it highly unlikely that Saudi officials would have carried out an operation of this nature without the Crown Prince’s authorization.”

Here is a timeline of the events leading up to and after Khashoggi’s killing. 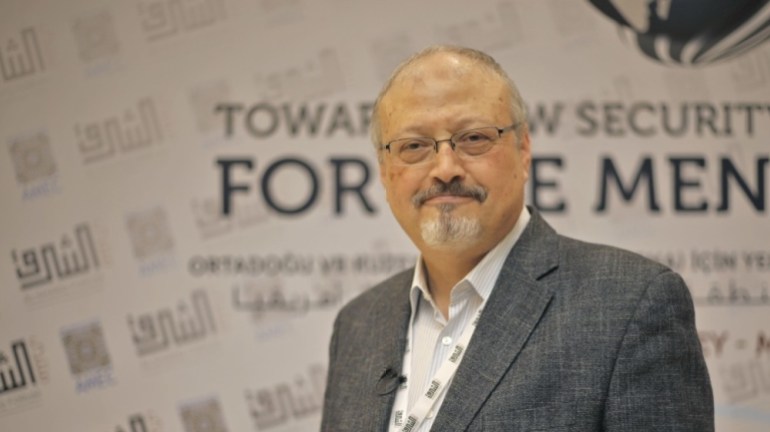 Jamal Khashoggi leaves Saudi Arabia for Washington, DC, where he hopes to continue writing amid a crackdown on dissent in his native Saudi Arabia.

“As we speak today, there [are] Saudi intellectuals and journalists. Now, nobody will dare to speak and criticise the reforms [initiated by Crown Prince Mohammed bin Salman (MBS)],” he told Al Jazeera’s UpFront three months earlier.

“Let’s talk about something other than women driving. The NEOM project, the futuristic city that he (the crown prince) plans to invest half a trillion dollars in. What if it goes wrong? It could bankrupt the country.”

The journalist meets Hatice Cengiz, a 36-year-old Turkish PhD student to whom he is soon engaged.

Khashoggi pays a first visit to the Saudi consulate in Istanbul to obtain a document attesting he had divorced his ex-wife, a requirement under Turkish law, so that he would be able to marry Cengiz. 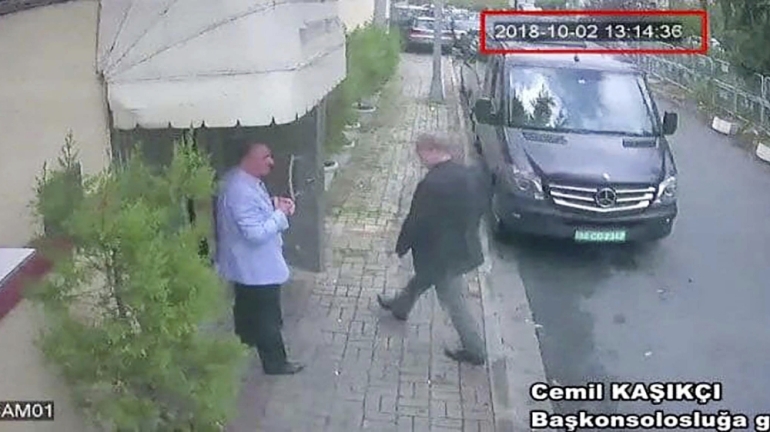 Accompanied by Cengiz – who waited outside the consulate – Khashoggi is recorded by surveillance cameras entering the building at 13:14pm (10:14 GMT).

Three hours pass before Cengiz asks consulate staff about Khashoggi, at which point she is told he had already left the building through the back door.

Saudi authorities issue a statement confirming Khashoggi’s disappearance but insist he had left the building.

“Mr Khashoggi visited the consulate to request paperwork related to his marital status and exited shortly thereafter,” the statement read.

A spokesperson for the Turkish presidency, however, says that Khashoggi did not leave the consulate.

The ambassador, however, denied knowing anything about Khashoggi’s disappearance, adding that he would inform authorities once he obtained further information.

MBS says that Khashoggi is not inside the consulate, adding that he is not against a Turkish investigation taking place and searching the mission.

“My understanding is he entered and he got out after a few minutes or one hour. I’m not sure. We are investigating this through the foreign ministry to see exactly what happened at that time,” the crown prince said in an interview with Bloomberg.

President Erdogan says he remains hopeful about the fate of Khashoggi amid reports that the critic may have been killed.

Erdogan says video footage of the entrances to the consulate would be reviewed as well as the monitoring of all inbound and outbound flights.

Yasin Aktay, Erdogan’s adviser, tells the Reuters news agency that he believes Khashoggi was killed inside the consulate.

Aktay added that a 15-man hit squad was “most certainly involved” in the matter.

Erdogan says the burden of proof falls on the Saudis, while US President Donald Trump says he is concerned about reports of Khashoggi’s disappearance.

The Washington Post – for whom Khashoggi wrote columns – reports that US intelligence had intercepted communications of Saudi officials planning to abduct the prominent journalist.

Ankara and Riyadh say they will form a joint group to look into Khashoggi’s disappearance.

Officials tell Turkish and US media that recordings exist of Khashoggi’s final moments inside the Saudi consulate. 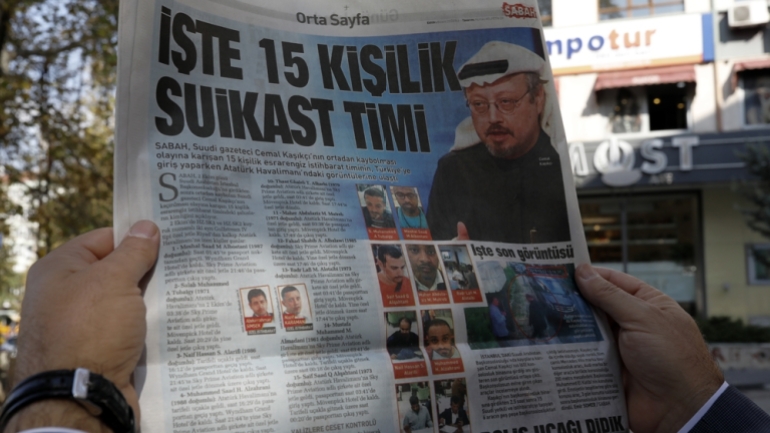 President Trump, a close ally of MBS, says Khashoggi’s death might be the work of “rogue killers”.

Turkish investigators enter the home of the Saudi consul in their search for Khashoggi.

Turkish media report that Khashoggi was killed “within minutes” of entering the embassy.

Trump says it “certainly looks” as though Saudi journalist Jamal Khashoggi is dead.

Saudi Arabia confirms Khashoggi was killed inside the Saudi consulate on October 2. Following the confirmation, 18 nationals are arrested for their involvement and five officials are sacked.

A Saudi Arabian official tells Reuters that the team of 15 Saudis who were sent to confront Khashoggi on October 2 killed him in a chokehold after “overstepping” their orders.

CNN airs footage of an apparent Jamal Khashoggi body double who was brought to Istanbul by the Saudi team.

President Erdogan accuses Saudi Arabia of planning the killing days before his murder on October 2, calling for answers regarding who ordered the killing.

Turkey says it has shared audio recordings of the murder with several governments, including the US, Germany, France, and the UK, as well as Saudi Arabia.

Saudi Arabia indicts 11 people it deems responsible for the murder of Khashoggi. The Saudi prosecutor also says it will seek the death penalty for five of them who gave the orders and oversaw the execution of the murder.

The CIA intelligence service reportedly concludes that MBS ordered the assassination of Khashoggi in Istanbul.

President Trump says he will not listen to the audio tapes of the Khashoggi murder.

White House stresses the importance of the Saudi-US relationship in an official statement.

“That being said, we may never know all of the facts surrounding the murder of Mr Jamal Khashoggi. In any case, our relationship is with the Kingdom of Saudi Arabia,” the statement says.

“It is absolutely essential to have a credible investigation and to have the punishment of those that were guilty,” Guterres says.

The murder trial of 11 suspects begins in Saudi Arabia, with the accused attending the hearing along with their lawyers. The attorney general demands the death penalty for five of the men.

A UN team led by Agnes Callamard, special rapporteur on extrajudicial, summary or arbitrary executions, begins an investigation into the murder.

The team visits the Saudi consulate in Istanbul during a week-long stay in the city.

The investigators will try to find out “the nature and extent of the responsibilities of states and individuals” in relation to Khashoggi’s killing, Callamard says. 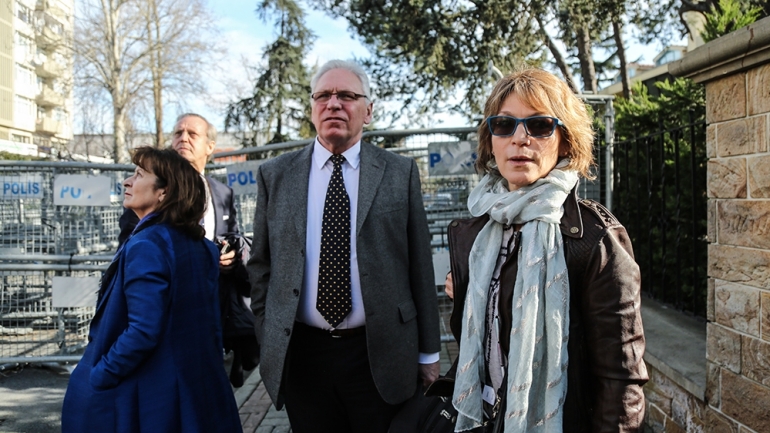 Agnes Callamard stands outside of the Turkish consulate where Jamal Kashoggi was killed [Cemal Yurttas/EPA] June 19, 2019

Callamard issues report on the murder, saying the crown prince and other top Saudi officials should be investigated for the killing.

Callamard says Khashoggi’s death “constituted an extrajudicial killing for which the State of the Kingdom of Saudi Arabia is responsible”.

Saudi authorities dismiss the findings in the report and claim conclusions are “unfounded”.

Turkish media release transcripts of audio recorded during murder, detailing the conversations between the journalist and members of the 15-man hit squad moments before his assassination.

Crown Prince Mohammed bin Salman denies ordering killing of Khashoggi in interview with US media, but said he ultimately bears “full responsibility” for what happened because he is the country’s leader.

The US Congress passes a defence bill that includes a provision that the director of national intelligence provide an unclassified report outlining evidence on “advance knowledge and role of any current or former official of the Government of Saudi Arabia” in the Khashoggi killing, within 30 days of enactment.

The Trump administration declined to release the report, telling legislators that revealing the information would compromise the national intelligence office’s sources and methods.

Eight of the 11 suspects on trial are found guilty, with five sentenced to death. The ruling says that the killing was not premeditated and cleared MBS adviser al-Qahtani of wrongdoing.

Khashoggi’s son, Salah, releases a statement on Twitter saying that he forgives his father’s killers.

Under Islamic law, death sentences in Saudi Arabia can be commuted if the victim’s family pardons the perpetrator.

A trial of 20 Saudis in absentia opens in Turkey.

Ahmed al-Asiri, the former deputy head of Saudi general intelligence; and Saud al-Qahtani are indicted on incitement to murder with monstrous intent and inflicting grave torment.

A Saudi court overturns the death sentences of the five people convicted in Khashoggi’s murder. They are instead sentenced to 20 years in prison.

Callamard, in an interview with Al Jazeera, condemns the Saudi trial as “theatre”.

Meanwhile, a new book recounts that Trump told Journalist Bob Woodward that he had “saved” MBS from consequences in the US.

“We stress the need for full accountability and transparent prosecution of those involved in the killing of Jamal Khashoggi,” Germany’s Ambassador Michael Freiherr von Ungern-Sternberg says.

Khashoggi’s fiance Cengiz and rights groups file a lawsuit a Washington, DC District Court against MBS and more than two dozen other top Saudi officials, seeking damages for his killing in Istanbul in 2018.

The lawsuit alleges MBS and other Saudi officials crafted the plan to kill Khashoggi after the defendants allegedly learned of Khashoggi’s plans to use Democracy for the Arab World Now (DAWN), the rights group he founded, “as a platform to espouse democratic reform and promote human rights”, the suit continues.

Nominee to be US Director of National Intelligence Avril Haines says during her Senate confirmation hearing that the incoming administration of Joe Biden will release the unclassified intelligence report on Khashoggi.

The White House says Biden plans to “recalibrate” relations with Riyadh, and will only communicate with King Salman, not MBS.

A month into his presidency, Biden has not had a call with the kingdom.

Callamard says the US intelligence report will be critical for justice.

US State Department spokesman Ned Price says release of report will be “important step” in accountability for the murder of Khashoggi.

Unclassified report from the US Office of the Director of National Intelligence places blame for operation that killed Khashoggi on Crown Prince Mohammed bin Salman.