Tiger Population On Road To Recovery With Annual Growth Of 6%: Centre 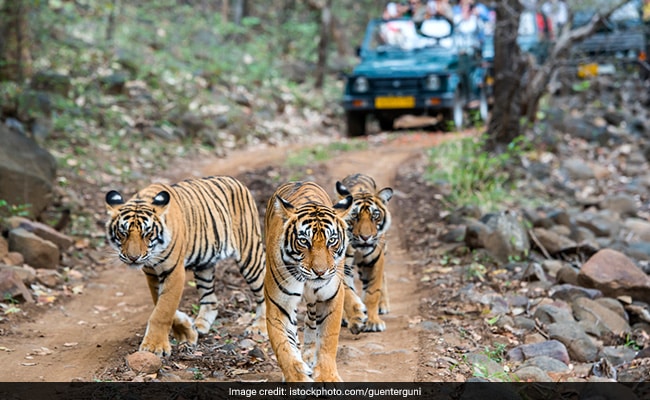 The Union Environment Ministry on Saturday stressed that four surveys since 2006 have shown a healthy annual growth rate of 6 per cent in India's tiger population, offsetting natural losses and keeping their numbers at the habitats-carrying capacity level.

The clarification by the ministry came following a PTI report based on an RTI reply that showed India lost 750 tigers in the last eight years due to several causes including natural deaths, poaching, accidents, conflicts and seizures.

The ministry cited details shared by the National Tiger Conservation Authority (NTCA) to emphasise that the tiger population in India has been brought to an assured path of recovery from the brink in the last few years.

"Due to efforts of the government of India thorough the National Tiger Conservation Authority, the tiger has been taken from the brink to an assured path of recovery, which is evident in findings of the quadrennial All India Tiger Estimation conducted in 2006, 2010, 2014 and 2018," the NTCA said.

"These results have shown a healthy annual growth rate of tigers at 6%, which offsets natural losses and keeps tigers at the habitats carrying capacity level, in the Indian context," it said.

The RTI data showed that 369 tigers died of natural causes, 168 due to poaching, 42 due to unnatural causes like accidents and conflicts, 101 due to seizures of the animal across the country.

"For the period 2012 to 2019, one can observe that the average tiger deaths per year in the country hover around 94, which is balanced by the annual recruitment as highlighted by this robust growth rate," the NTCA said.

The statutory body under the environment ministry said it has taken several steps under the ongoing scheme of Project Tiger to address poaching, which too, is significantly controlled.

Project Tiger is a centrally-sponsored scheme of the ministry of environment and forests, providing central assistance to the states having designated tiger reserves.

"The National Tiger Conservation Authority maintains the highest standards of transparency so far as making tiger death statistics available to the citizen through its website as well as a dedicated portal, www.tigernet.nic.in, so that people can make a logical assessment, if they desire," it said.

On the news report, it said the presentation of data over a long time frame will show large numbers, which may cause undue alarm.

The NTCA said it has a stringent protocol to ascribe cause to a tiger death, which is treated as unnatural, unless otherwise proved by the state concerned through submission of necropsy reports, histopathological and forensic assessments besides photographs and circumstantial evidence.

"It is only after a detailed analysis of these documents that the cause is ascribed to a tiger death," it added.

"While it is appreciated that figures as available on the NTCA''s website and as provided in the RTI reply have been used in these reports, the manner in which it has been presented causes alarm and does not take into account the gamut of processes that go into dealing with tiger death in the country and the natural gains that have been made in tiger conservation," it said.