Armenian Prime Minister Nikol Pashinyan has accused top military officers of attempting a coup after the army demanded his resignation, prompting a rally of thousands of supporters.

The army’s demand, in a written statement on Thursday, came in response to his handling of the country’s conflict with Azerbaijan over Nagorno-Karabakh, which ended in November last year with Armenia’s loss of control over the disputed region and surrounding areas.

“The ineffective management of the current authorities and the serious mistakes in foreign policy have put the country on the brink of collapse,” the army’s general staff and other senior military officials said.

Two former presidents, Robert Kocharyan and Serzh Sarksyan, released statements calling on Armenians to throw their support behind the military.

It was unclear whether the army was willing to use force to back its statement.

Pashinyan, 45, has faced calls to quit since he signed a November 10 peace deal with Azerbaijan but it was the first time the military had called publicly for his resignation.

He told his followers to rally in his support in the capital, Yerevan, where he delivered a fiery speech to several thousand people denouncing the generals’ demands. 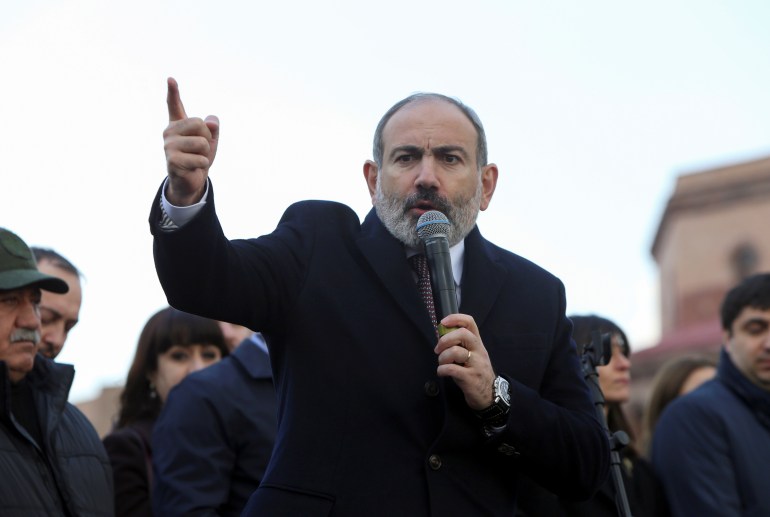 Pashinyan said he had dismissed the head of the general staff of the armed forces, but that the move had still not been signed off by the president.

Russia, which is traditionally a close ally and has a military base in Armenia, said it was alarmed by events.

President Vladimir Putin on Thursday called for restraint from all sides in the Armenian political crisis in a phone call with Pashinyan, the Interfax news agency reported, citing a Kremlin spokesman.

Al Jazeera’s Robin Forestier-Walker, reporting from Tbilisi, Georgia, said that it would be “unprecedented” in the Republic of Armenia if the military were to seize power from Pashinyan.

He also said that what happened next could depend on “whether Moscow would back Pashinyan or stay out of the way and not get involved”.

“Putin did not approve of Pashinyan because of his reformist, pro-democratic, almost liberal credentials. But since the war [with Azerbaijan], Pashinyan has certainly shown that he is more than willing to do everything he can to keep Russia happy. Armenia depends so much on Russia now,” he said.

The loss of territory in and around Nagorno-Karabakh last year was a bitter blow for Armenians, who fought a war with Azerbaijan over the enclave in the 1990s which killed at least 30,000 people.

The mountain region is internationally recognised as part of Azerbaijan but is populated by ethnic Armenians. Russian peacekeepers have been deployed to the region.

Pashinyan, a former journalist who came to power in a peaceful revolution in May 2018, said he takes responsibility for what happened but has refused to quit, saying he is needed to ensure his country’s security.

“The most important problem now is to keep the power in the hands of the people, because I consider what is happening to be a military coup,” Pashinyan said.

He cultivated an image as being close to the people as he was carried to power in 2018 by protests known as Armenia’s Velvet Revolution, often sporting a baseball cap and inveighing against official corruption.

On Thursday, he used a hand-held loudspeaker to shout greetings to passers-by as he led a march of thousands through Yerevan.

In nearby Freedom Square, more than 20,000 opposition supporters held a parallel rally, and some promised to stay there until Pashinyan stepped down.

Demonstrators paralysed traffic all around Yerevan, chanting “Nikol, you traitor!” and “Nikol, resign!”

There were sporadic scuffles in the streets between the sides, but the rival demonstrations led by Pashinyan and his foes later in the day went on in different parts of the capital.

As evening fell, some opposition supporters built barricades on the city’s central avenue.

In a statement, the defence ministry said the army was not a political structure and any attempts to involve it in politics were inadmissible.

Pashinyan called on the opposition to stop protesting and suggested talks.

The US Embassy in Yerevan urged all parties in Armenia to “exercise calm and restraint and to de-escalate tensions peacefully, without violence”.

In Brussels, European Commission spokesman Peter Stano also called on rival sides to “avoid any rhetoric or actions that could lead to further escalation”.

And Turkish Foreign Minister Mevlut Cavusoglu said his country strongly condemned the coup attempt in Armenia and stood against all coup attempts, anywhere in the world.