Thousands of people across Nigeria have taken to the streets for a sixth straight day to protest against police brutality, keeping up the pressure in a campaign that forced the government to announce the dissolution of a notorious police unit.

The #ENDSARS protests have since gained major backing in the country and the diaspora, with some of Nigeria’s most popular stars throwing their weight – and considerable followings – behind the rallies.

Afropop duo P-Square and rapper Falz were leading the movement on Tuesday in Lekki, a neighbourhood of the commercial capital of Lagos, where several thousand people blocked a major highway. Protesters also took to the streets of the capital, Abuja, and the southeastern cities of Port Harcourt and Uyo.

The disbanding of SARS is only the first step in our commitment to extensive police reforms in order to ensure that the primary duty of the police and other law enforcement agencies remains the protection of lives and livelihood of our people. pic.twitter.com/XjQMSr3jlm

On Sunday, days after angry protests, the government announced SARS was being disbanded and its officers would be redeployed to other units. President Muhammadu Buhari insisted the disbanding was the first step in “extensive police reforms” while Nigeria’s police chief promised to investigate allegations of abuse involving SARS officers.

But many in Africa’s most populous nation say the announcements did not go far enough, expressing scepticism after previous pledges to improve Nigeria’s notorious police went unfulfilled.

The demonstrators’ demands now appear to have widened to include calls for reforms across the country’s entire police system. Protesters have called for an independent body to investigate police abuse, according to a list of demands widely shared on social media.

The demonstrations, meanwhile, have also been challenging growing anger among the youth over unemployment, corruption and economic mismanagement.

“Police brutality is a common theme that resonates between the elites and the common man,” said analyst Confidence MacHarry from Lagos-based research consultancy SBM Intelligence.

Now that grievance is being fuelled by an economic downturn caused by the coronavirus pandemic and a fall in oil prices.

“Unemployment has jumped significantly, so the economic situation is a trigger,” MacHarry said. “Economic discontent feeds into this resentment against rising police brutality.” 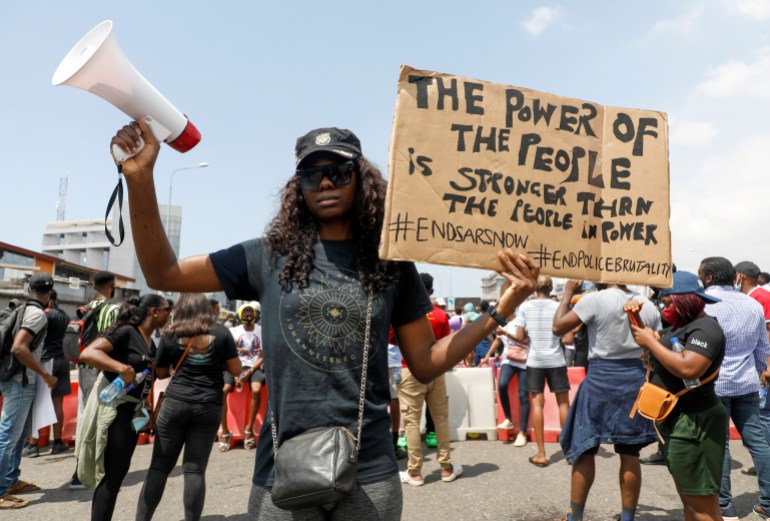 A demonstrator protests against alleged police brutality, in Lagos, Nigeria [Temilade Adelaja/Reuters]Meanwhile, police announced on Tuesday a new unit, the Special Weapons and Tactics team (SWAT), to “fill the gaps” after the scrapping of SARS.

Some Nigerians said on Twitter the move confirmed fears that police would simply recreate SARS under a new name. Less than an hour after the statement, protesters posted the news with the hashtag #EndSWAT.

#EndSARS protest group don't look to be backing down anytime soon, as a huge crowd of protesters returned to the Lekki toll plaza in continuation of the protests.
They were joined by entertainers like Falz, Timi Dakolo and Nedu of Wazobia FM.

The demonstrations have largely been peaceful, but violence has flared in the face of heavy-handed police tactics.

Authorities said a police officer and civilian were killed during protests in Lagos on Monday.