Thousands of migrants have set up a makeshift camp on the United States side of the southern border, under a bridge that connects Texas with Mexico.

Late on Thursday, the mayor of Del Rio Texas said 10,503 migrants were under the Del Rio International Bridge which connects to Ciudad Acuna, Mexico – up from 8,200 in the morning.

Those staying in the camp have told reporters that water and food are scarce, with some wading through the Rio Grande River and back into Mexico to stock up on essentials they say they are not receiving on the US side.

Many have told reporters they have received tickets from US border officials, and are waiting to be processed.

Jeff Jeune, a 27-year-old Haitian who was reselling water bottles for a 3 peso (15 cents) profit, told Reuters news agency he and his young family were exhausted, hungry and sleeping on the ground. He fretted about his kids falling ill in the makeshift camp. 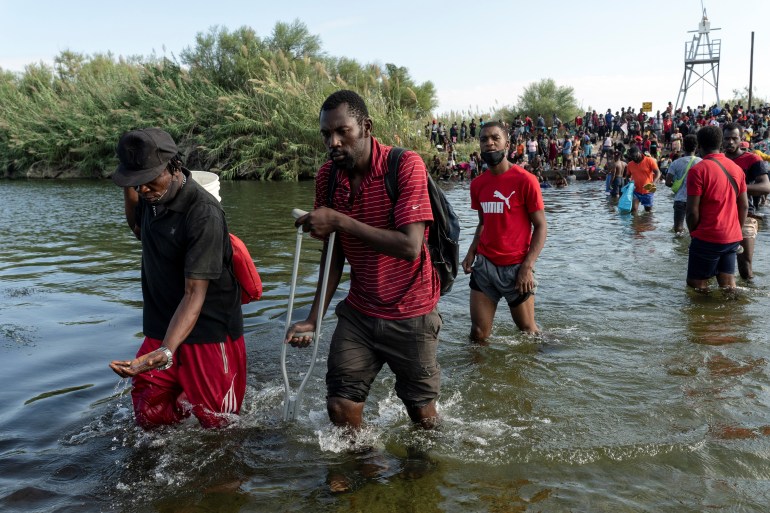 Migrants seeking asylum in the US walk in the Rio Grande River near the international bridge between Mexico and Texas [File: Go Nakamura/Reuters]

The migrants are mostly Haitians, with authorities and rights groups saying they are most likely part of a new wave of migrants heading north after being displaced to South American countries in the wake of the 2010 earthquake in Haiti.

Cubans, Venezuelans and Nicaraguans were also present among the group, which represents the most recent crisis at the border for US President Joe Biden.

Del Rio Mayor Bruno “Ralphy” Lozano described the situation as the “worse case of worst-case scenarios”, according to The Washington Post.

“I need the administration to recognise that there is a border crisis happening in real time right now and it has dire consequences on security, health and safety,” he said, adding that many of the migrants arrived in buses that appear to be part of a wider smuggling operation.

Meanwhile, US Customs and Border Patrol said in a statement the agency was increasing staffing in Del Rio to facilitate a “safe, humane and orderly process”.

Drinking water, towels and portable toilets have been provided, the statement added, while migrants wait to be transported to facilities.

The Biden administration has promised a more humane approach to migration than the hardline policies of former President Donald Trump, but has faced political backlash over a surge in crossings.

The administration has continued to use a public health order, citing the coronavirus, to turn people away at the border, although on Thursday a federal judge blocked the use of the rule to turn away those crossing the border. The ruling is set to come into effect in two weeks.

Prior to that, the percentage of migrants sent back to Mexico under the rule has gradually declined in recent months.

The US Supreme Court also recently ruled the Biden administration must restart the so-called “Remain in Mexico” policy created under Trump.

Biden officials had sought to end the programme, which requires those seeking asylum in the US to wait in Mexico, often in squalid, crime-ridden camps, for their cases to be processed.

‘When are we leaving?’

Ernesto, a 31-year-old Haitian migrant, slipped back into Mexico on Thursday to buy water and food – for the fourth time, he said, since arriving in the US on Monday morning.

Ernesto, who declined to give his surname to protect his identity, told Reuters he and his three-year-old daughter had not been fed at the camp, where migrants are jostling for shade.

Sometimes, he said, he runs to avoid Mexican migration officials but is usually not bothered by them.

“But now money is running out,” he added.

Carlos, a 27-year-old Venezuelan who said he left his home after graduating from university in July, said he thought the camp had doubled in size since he arrived on Tuesday.

Carlos, who declined to give his full name, told Reuters he had only $10 left, and that there were 400 families ahead of him in the queue for processing.

Both migrants and Mexican officials said many more people are expected in the coming days.