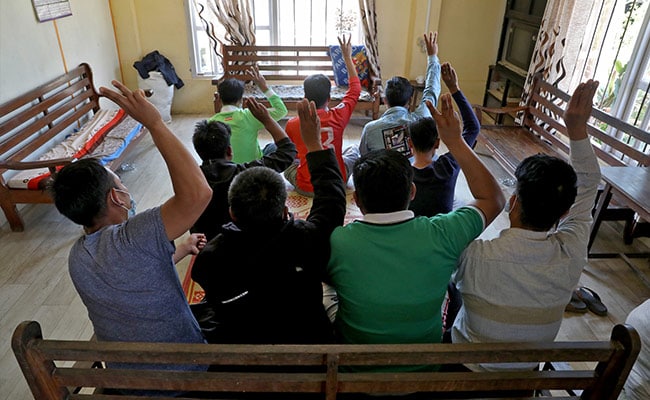 Myanmar nationals at an undisclosed location in Mizoram, near the India-Myanmar border.

Strung across remote mountain settlements, a secret network of activists and volunteers is helping spirit hundreds of defecting Myanmar policemen away from the military's brutal crackdown on dissent and into relative safety in India.

Their escape - by car, motorcycle and on foot through densely forested terrain - is often guided by volunteer-led groups on both sides of the border, according to accounts from at least 10 people who are involved in the loose-knit network or have used it to cross the border. Once in India, local activists and residents provide food and shelter in safe houses, the people said.

Some police personnel have said they fled Myanmar because they feared persecution after refusing to obey the military junta's orders to shoot protesters.

More than 1,000 people fleeing violence in Myanmar have crossed into neighbouring Mizoram since late February, according to Rajya Sabha MP K. Vanlalvena, Reuters has reported. That includes about 280 Myanmar police and more than two dozen fire department personnel, according to a senior police official in Mizoram.

The tools used by members of the network are simple: social media messaging apps, mobile phone SIM cards from both countries, hardy jeeps and a knowledge of smuggling routes along the Tiau River, a narrow ribbon of water flowing between sparsely populated mountains that separate India and Myanmar.

"It is a matter of life and death," said a 29-year-old activist named Puia, who has been assisting people arriving from Myanmar in eastern Mizoram's Champhai town, a seven-hour drive away from the state's capital of Aizawl. He asked to be identified by only part of his name.

More than 280 people have been killed in Myanmar amid a wave of protests in the southeast Asian country demanding the return of the civilian government led by elected leader Aung San Suu Kyi, according to figures from the Assistance Association for Political Prisoners (AAPP) activist group. The group says thousands of people have been detained since the military staged a coup on Feb. 1.

On Wednesday, the junta freed hundreds of people who had been arrested during the crackdown on demonstrations, according to witnesses and the AAPP.

Myanmar's military, officially known as the Tatmadaw, didn't respond to a request for comment.

The junta earlier this week accused anti-coup protesters of arson and violence while also expressing sadness for the deaths of what it said were 164 demonstrators. It added that it would use the least force possible to quell violence.

Myanmar's military has said a Nov. 8 election won by Suu Kyi's party was fraudulent - an accusation the country's electoral commission has rejected. Military leaders have declared a state of emergency. They have promised a new election but have not set a date.

The influx from Myanmar could pose a diplomatic challenge for India, which has close relations with the Tatmadaw.

The arrivals from Myanmar have also generated some disagreement between India's federal government, which wants to keep them out, and Mizoram's state administration that is keen to provide assistance in line with local sentiment. Tribes in Mizoram share close ties with Myanmar's Chin community, which is dominant in the areas bordering the Indian state.

The Indian foreign ministry and the Mizoram state government didn't respond to requests for comment.

India's foreign ministry has previously expressed "deep concern" over the military coup, saying democracy and the rule of law must be upheld. The Indian government has issued a directive to four states sharing a border with Myanmar, including Mizoram, to tighten security, according to three Indian officials.

Mizoram's Chief Minister Zoramthanga has urged Prime Minister Narendra Modi to grant asylum to "political refugees" from Myanmar. The situation in neighbouring Myanmar is a "human catastrophe of gigantic proportions" that India couldn't ignore, wrote Zoramthanga, who uses only one name, in a March 18 letter to Modi.

'SOMETIMES I AM AFRAID'

The 510-km-long boundary between Mizoram and Myanmar has long been fluid, with a constant flow of people and goods enabled by a visa-free travel regime in the border region.

One man managing a critical section of the network in an Indian border town in eastern Mizoram is a 60-year-old teacher originally from Myanmar, who speaks Burmese and several local dialects. He described his role in the network on condition of anonymity.

The teacher said he had left Myanmar in the wake of the 1988 suppression of pro-democracy protests by the military junta. As many as 3,000 people are thought to have been killed in those clashes.

A slight man with a close crop of curly hair, the teacher said the calls for help from people across the border began around Feb. 26, when Myanmar security forces intensified their crackdown on pro-democracy protesters. He said he receives about half a dozen or more requests for assistance a day, some via phone calls and some via Facebook. 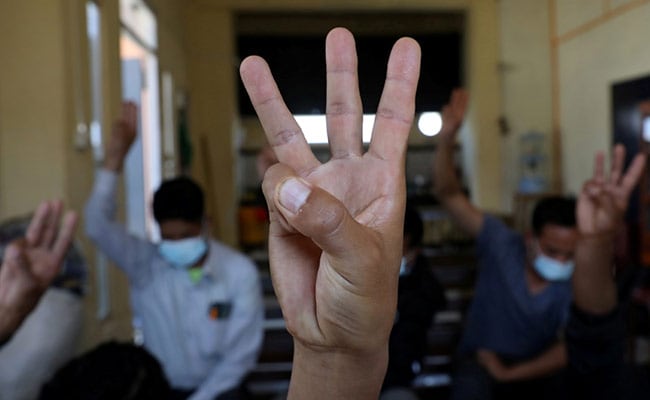 Myanmar nationals including those who said they are police and firemen and recently fled to India flash the three-finger salute at an undisclosed location in Mizoram, near the India-Myanmar border, March 15, 2021.

"I help them as much as I can," he said, tapping away on his smartphone. "Sometimes I am afraid," added the teacher, saying he feared that his involvement in the network could jeopardize his job at a government school.

As of March 11, the day Reuters interviewed him, he said he had helped guide a total of around 80 people into Mizoram recently. Three other local activists speaking to Reuters more than a week later corroborated that tally, and said they believed the figure was now likely twice that.

The teacher said that many of the people coming from across the border were directed to him by a community group in Myanmar's Chin state. The teacher said one of his relatives by marriage who lives in Chin state is a member of the group.

Two policemen who recently crossed into India told Reuters they were also guided by volunteer-led groups in Myanmar. Both recalled journeys that passed through townships in northwestern Myanmar.

One of them, a Myanmar policeman named Peng, who fled his country in early March, said he had approached "young people" in Chin state to help with his escape. He asked that only part of his name be used to protect his identity. Reuters saw his police and national ID cards, which confirmed the name.

Four other police personnel who entered India in early March said they too received assistance from a Myanmar-based community group for their journey. They travelled through Myanmar's Sagaing region and Chin states before crossing into India. Their account is contained in a joint statement in a classified Indian police document reviewed by Reuters.

Another policeman Reuters spoke to, named Ngun, described a similar crossing. Reuters saw his national ID card, which confirmed his name. The man said he didn't have his police ID card with him.

The cost of the journey through Myanmar to the border is between $29 and $143, depending on distance travelled, according to the policemen Peng and Ngun. The cost was mostly to pay for transport, such as hiring a vehicle or using shared taxis, they said.

Ngun, the policeman, said he entered India in early March near a remote Mizoram village perched on a steep mountainside ringed by thick forests, about an hour's drive to the Tiau River.

Since Feb. 25, more than two dozen policemen - including four in uniform - have been fetched from the river by community leaders in the village, according to a 51-year-old school teacher who lives there and spoke on condition of anonymity. The village lies some 200 kilometres away from Mizoram's capital.

Members of the network in Mizoram receive word from the Myanmar side about when and where people plan to cross over, according to the teacher as well as Puia, the activist. Then, local community leaders on the Indian side dispatch vehicles along established smuggling routes that weave around paramilitary posts, according to the teacher. Many of those fleeing Myanmar rested in the village before heading deeper into Mizoram. 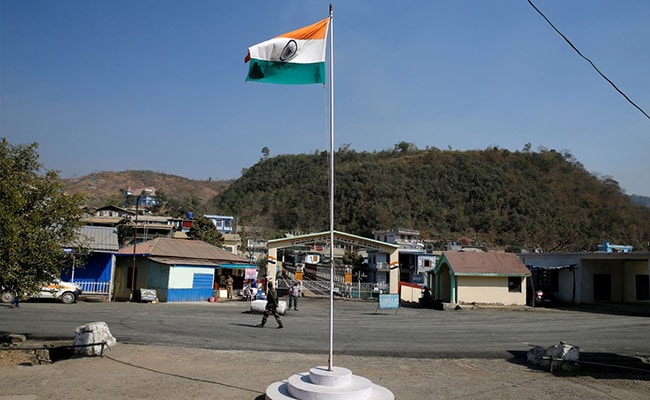 An Indian national flag flies next to an immigration check post on the India-Myanmar border in Zokhawthar village in Champhai district in Mizoram.

"Since they look like us," the teacher said of the Myanmar arrivals, "they can travel without anyone noticing."

'I WILL NOT GO BACK'

On March 12, around 116 people from Myanmar streamed into eastern Mizoram, according to the senior state police official, taking advantage of an unfenced border.

In a nearby village on March 15, a group of about a dozen recently arrived people from Myanmar lounged in a living room in the house of a community leader. Most of them said they were policemen and firemen.

Dressed in a red Manchester United football jersey, a man who identified himself as a fire department official described a difficult journey on motorcycle and by foot to India from Myanmar's Chin state. The man, who said his name was Khaw, said he and his fellow travellers hid in the jungle for fear of being caught by Myanmar's security forces. They didn't sleep for days.

He said he constantly worries about the wife and four children he says he left behind. But so long as the military crackdown lasts in Myanmar, he said, "I will not go back."