In her narrow, sun-lit London kitchen, 97-year-old Nisharat Kaur Matharu is following her life’s motto: As long as your hands and feet work, use them to serve others. For now, that means her hands are covered in flour as she vigorously kneads and punches some dough.

It is a sparkling clean, functional space where everything has its place and the smell of buttery, fresh-off-the-hot-plate chapattis fills the air. It is also the room where, since 2017, she has made hundreds of meals a week – creamy lentils, Indian-style rice pudding with cardamom, nuts and sugar, crispy pastry with cumin seeds – for the homeless.

The food is served by Hope for Southall Street Homeless, a community initiative that runs a night shelter and drop-in centre in the area of west London that Nisharat has called home since she first arrived in the UK as a 54-year-old mother-of-five in 1976.

By then, her life’s journey had already taken several unexpected turns.

With a huge smile, Nisharat’s 67-year-old daughter, Kulwant, prepares to share her mother’s story, but not before she has asked her for a masala chai – “the proper Indian cha (tea), mum.”

“My mother was born in Punjab and when she was six-months-old she lost her mother,” she explains, the two now sitting in Nisharat’s impeccably neat, white-walled living room with its large industrial sewing machine in the corner. “My granddad remarried soon after – another arranged marriage – and when he and his wife had their first child … the step mum decided she didn’t want her.”

Nisharat was two years old when she was left on a pile of rubbish outside her family’s house in Moga, Punjab. A few hours later, she was found there by her paternal aunt – hungry and sunburnt. Her aunt took her to her paternal grandmother’s house, where Nisharat was kept as a child labourer, responsible for cooking, cleaning and any other chores that were assigned to her.

With cuts on her fingers from chopping onions, garlic and chillies, she would watch other girls her age go to school or to the park and wonder why she couldn’t. But by the age of eight, she could cook a three-course Indian meal and was an expert at making perfectly shaped chapattis.

The two women talk simultaneously – Nisharat often saying in Punjabi exactly what Kulwant, a headteacher and mother-of-three, is describing in English. At 5ft10 (1.8 metres), Kulwant towers over her mother in her white salwar kameez, her thin, grey hair tied neatly into a bun. They are both mother and daughter and best friends. 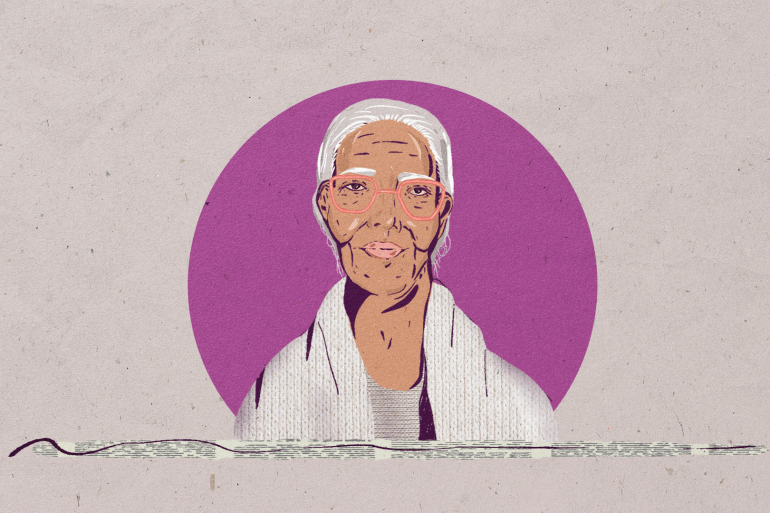 [Jawahir Al-Naimi/Al Jazeera]When Nisharat was 14, a family friend arranged her marriage – to a 16-year-old boy from an Indian family living in East Africa. She did not question it, she says, and recalls little about it other than her father telling her: “Do what your husband says and don’t answer him back. Don’t ever do anything that will leave a mark on his beard [meaning to always show him respect].” Nisharat dabs at her eyes with a tissue as she remembers this.

A few years later, she moved to East Africa with her husband, who was working as an electrician. There, she was expected to care for her husband’s family, particularly his father who had been left incapacitated by polio. Life was difficult. She lived there for 40 years, giving birth to and raising five children, and always did as she was told.

Then, when her oldest child was 26 and her youngest 10, she was told they would be moving to the UK. Her husband had a British passport on account of his father having served in the British army but would lose it if he did not return to the country. Nisharat did not want to leave Africa, but she accepted this decision just as she had all of the other decisions he had made for her.

They arrived in Southall, an area that today has the largest Sikh community in London, as well as a large Muslim and Hindu population, and moved into the home she still lives in today.

Nisharat found it hard to adjust – to the language, the culture, the loneliness of a place where people did not just turn up at your home to visit, and to cooking on a gas stove instead of on coals.

“My mother has had a lot of struggles,” Kulwant explains, growing more animated. “Life was quite tough for her as a woman who went from a village in India to Africa, not being familiar with [the] culture and didn’t speak the language. She had the responsibility not just of me and my four siblings, but of my dad’s siblings too. You know the typical Indian scenario, where the mother does have all the responsibility,” she adds, rolling her eyes.

Her innate quality she has, is that she does for others. She overcomes her own hurdles, very few people in life have this.

It did not get easier for her in London. Kulwant’s voice grows louder as she describes how her father would drink to excess and when her mother would serve his food, refuse to eat until the chapattis were cooked to his exacting standards.

“My mother never said anything, she would continue making them. She would never eat with him, but after and would sit on the floor.” Nisharat interrupts her daughter to add more details, describing how she would not dare speak when her husband was drunk.

“I questioned this, but my siblings didn’t and I don’t know why they didn’t,” Kulwant continues.

“I remember one day my father was really drunk and he threw something at my mother. I jumped on him to stop him, he was a big, tall man. He then beat me, because Indian women were not allowed to say anything in those days. He didn’t speak to me for two years and I was daddy’s little girl, so this was really hard for me …”

Nisharat interjects in Punjabi to tell her side of the story: “I hated his drinking. I couldn’t understand his behaviour; he was a very angry, aggressive man when he had been drinking.”

Despite the gravity of the subject, their conversation is warm and good-humoured and the two women regularly break into laughter. Nisharat’s conversation turns to how it is her daughter who inspires her.

“My daughter is a carbon copy of me,” she says. “I wish I had done all the things she is doing; she supports poor children in India. She set up a school there and loves to help others. I feel proud of her, she has been through a very difficult time, she had cancer, went through a divorce but still stays strong and wants to give back. This is a real blessing.” 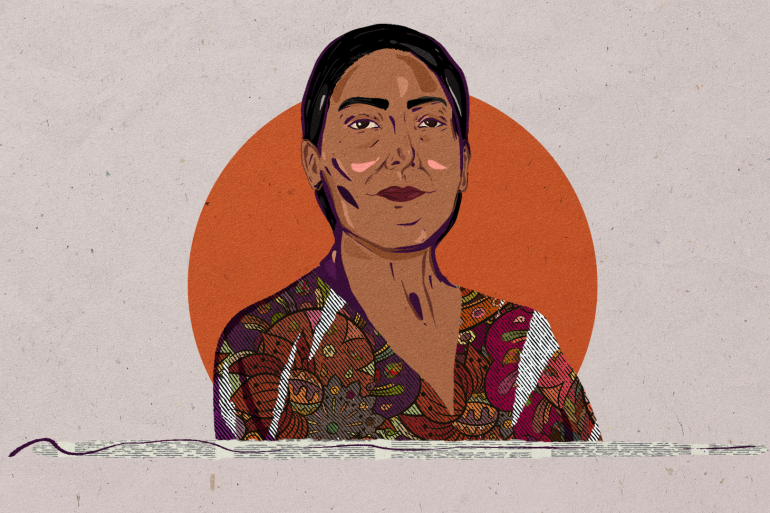 [Jawahir Al-Naimi/Al Jazeera]Kulwant turns to her mother and asks: “Make me another nice masala cha, mum.” Nisharat gets up and goes off to the kitchen with a smile.

Kulwant lowers her voice and leans forward as she explains: “Her innate quality she has, is that she does for others. She overcomes her own hurdles, very few people in life have this. This is how Sikhs should be. She is humble, genuine, kind-hearted and an honest soul. She never shows off. She will go out of her way for anyone. She treats everyone like family, she has so much love in her heart.

“My mother is a true person; she is what she is. I can’t really remember her ever changing much, we were more scared of my mother than my dad, yet she never hit us. She was also very good at sitting us down and explaining things, which is something she didn’t have in her life.”

Before the coronavirus pandemic, the two women would spend a day each month together – going for walks and to the cinema, where they would eat popcorn with chai tea latte.

“During the lockdown, it’s been very special actually, we don’t have the constraints of the humdrum of work pressures. I would come to my mother’s house [and] we would make meals for the homeless together,” she explains. They laugh about the Indian drama series her mother likes to watch and enjoy spending time with one another.

“What I love most is her very kind, placid nature, [the] unconditional love she showers on everybody.”

Nisharat returns from the kitchen, cha in hand, and positions herself on the sofa, where she continues her knitting – a mustard sweater. “Who is it for?” Kulwant asks her. For you, who else, her mother replies. Kulwant laughs: “I knew it would be for me.”

“When I had cancer and I went through a divorce … my only support was my mother,” Kulwant explains. “I need her in my life; she means the world to me.”

Nisharat looks at Kulwant as she explains in Punjabi: “My daughter is everything to me … She’s a very strong woman and I look up to her.”

They both say that cooking for the homeless has made them closer. “It’s the highlight of our week, we are a team,” says Kulwant, adding: “The majority of the homeless are from different backgrounds, but [there are] a lot of Punjabi people and when we turn up they are waiting with a smile. They always comment on how it reminds them of how their mothers cooked food for them in India.”

Nisharat has returned to stuffing the chapattis now as Kulwant describes her method. “She boils potatoes, then cools them down, then chops this into tiny pieces, adding some chopped onions, chillies, a teaspoon of cumin seeds, some ginger, fresh coriander, salt to taste and mixes it together. You then make some chapatti flour, roll it out into a circle, add the mixture in the middle of the chapatti and then fold up the chapatti into a round ball and use the rolling pin to roll it out. Then place it in the frying pan and cook both sides, adding butter to each side, and when brown it’s cooked and it’s so yummy, especially with a masala chai.”

Nisharat smiles. “Through sewa is meva [which means through selfless service you get goodness]. I recite Waheguru [wonderful God] when I am cooking and it’s this blessing from God that adds the flavour in the food,” she says.