The youth-led protest movement that began last year has been reinvigorated by the arrests of prominent protest leaders.

Hundreds of demonstrators have gathered in the Thai capital, Bangkok, to demand authorities release some protest leaders from jail, defying an order on Friday banning public gatherings in the city.

A youth-led protest movement sprang up last year calling for the resignation of Prime Minister Prayuth Chan-ocha, a former military government leader, and reform of the powerful monarchy. Thai courts have denied recent requests for bail for some of the jailed protest leaders.

“Release our friends,” shouted the protesters in unison on Saturday, as they gathered in front of a criminal court surrounded by barbed wire. A water cannon could be seen behind the gates of the court.

“Abolish 112,” they also said, referring to Thailand’s lese majeste law, or Section 112 in the Thai criminal code, which prohibits anyone from insulting or defaming the king.

A few protesters burned photographs of the king at the rally. Separate groups also led two other protests at other locations in Bangkok.

Earlier on Saturday, police warned protesters they risked being arrested and police might use harsher measures if protesters became unruly.

“Protests are illegal. Anyone who joins or invites others to join is breaking the law,” Piya Tavichai, deputy commissioner of Bangkok Metropolitan Police Bureau, told a news conference. 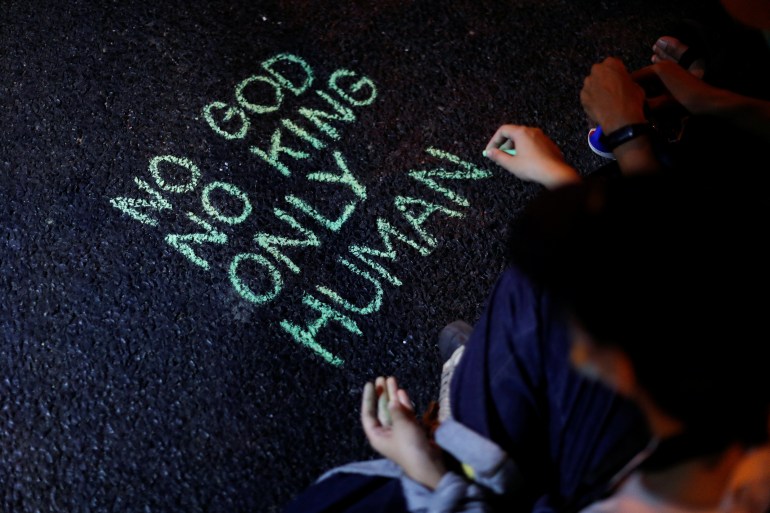 Anti-government demonstrators write a slogan on a street during a protest demanding the release of arrested leaders charged with lese majeste law in Bangkok [Jorge Silva/Reuters]Police used rubber bullets for the first time last Sunday, as well as tear gas and water cannon to disperse protesters. Ten protesters and 26 police were injured.

In a podcast on Saturday morning, the prime minister urged Thais to respect the law and avoid conflict.

“We have to love each other and be united, not divided, and respect the law,” said Prayuth, who first came to power after leading a military coup in 2014.

The Royal Palace has declined to directly comment on the protests, but Prayuth and government officials have said criticism of the king is unlawful and inappropriate

The youth-led political movement was launched last year. But it lost steam when it took a break in December and January as Thailand was hit by a second wave of coronavirus infections.

However, the recent arrest of four prominent protest leaders has reinvigorated the pro-democracy protests.