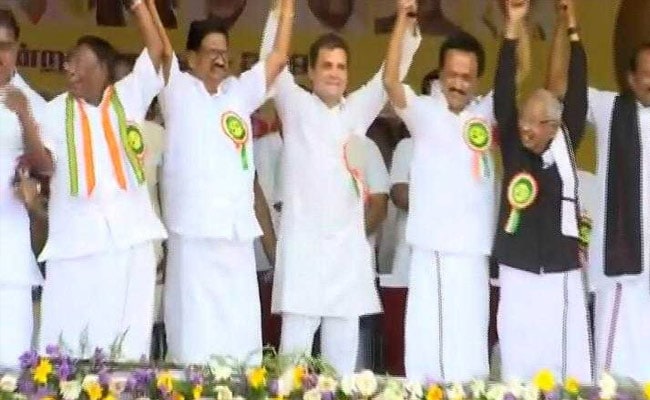 The Congress wants 50 seats, the DMK may not agree for over 25.

The Congress and the DMK today begin their seat-sharing talks as Tamil Nadu gears up for its assembly elections. Their Secular Democratic Alliance (SDA) alliance is looking to replace the AIADMK-led combine, now serving its second straight term in the state. The polls, the dates for which are expected to be announced in the first week of March, are likely to be held in April-May.

The 234-seat Tamil Nadu assembly's current term comes to an end in May.

The Dravida Munnetra Kazhagam (DMK), the SDA's leading outfit in the state plans to contest in over 175 seats, DMK sources have told NDTV. It will not agree to more than 25 seats for the Congress, leaving the rest of the alliance's parties with single digits. It will be represented by a five-member team, including opposition leader and DMK chief MK Stalin. Others in the team are General Secretary Duraimurugan, Parliamentary Party leader, TR Balu, and MP Kanimozhi.

The Congress, on the other hand, is keen on 50 seats. Senior leaders Oommen Chandy, Dinesh Gundu Rao, and Randeep Surjewala will be the ones holding the negotiations from its side, joined by the state Congress leaders.

The DMK has for long been the dominant party in the state. In the current Assembly, it has 97 members while the Congress has only seven - the DMK had contested in 178 seats and the Congress in 40.

In the previous Lok Sabha polls held in 2019, however, their alliance showcased strong performance, winning 38 of the 39 Parliamentary seats - DMK won all 20 it fought for and the Congress eight out of nine.

The incumbent regime, seen to be on the backfoot till now after two straight terms, has been gathering initiative in recent weeks. The BJP's own machinery and Prime Minister Narendra Modi's visit to the state aside, the All India Anna Dravida Munnetra Kazhagam (AIADMK) is still gauging the impact of the return of VK Sasikala, the former aide of late Chief Minister J Jayalalithaa, who has already begun canvassing for the ruling party.