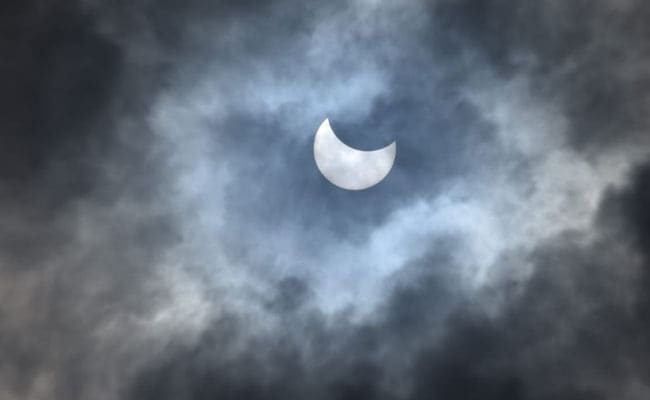 Surya Grahan 2020: The solar eclipse eclipse as seen from Gurgaon

Surya Grahan or solar eclipse this year coincides with the summer solstice, which is the longest day of the year in the Northern Hemisphere, on June 21. This year it is an annular eclipse often called the 'ring of fire'. The annular phase is currently underway but cloudy skies are playing a spoilsport for enthusiastic sky watchers in Delhi.

Where is Surya Grahan visible from

The eclipse began at 10.19 am and will end at 2.02 pm. The Surya Grahan is underway in several parts of the country like Rajasthan, Uttarakhand, Gujarat, Delhi among others. The narrow annularity phase can be best seen in Dehradun, Kurukshetra, Chamoli, Joshimath, Sirs and Suratgarh.

It will be seen as a partial solar eclipse from the rest of the country.

Around 94 per cent of the Sun will be covered by the Moon at the time of greatest phase of partial eclipse in Delhi.

What is Surya Grahan

A solar eclipse occurs when the Moon is farthest from the Earth, and on the same plane as the Earth and the Sun, and blocks most of the Sun. At some point during the eclipse, the Moon will be perfectly aligned in the centre of the Sun, revealing a circle of brightness or "ring of fire" or annular shape of the Sun for us to witness.

How to watch Surya Grahan

Experts say, the Surya Grahan should not be viewed with naked eye. It is safest to watch the eclipse by using a filter like, aluminised mylar, black polymer, a glass shade or by making a projection of the Sun''s image on a white board by telescope.