June 25 (UPI) -- The U.S. Supreme Court ruled Thursday that an asylum-seeker designated for a quick deportation has no legal right to challenge his removal in federal court, handing a victory to the Trump administration.

In a 7-2 decision, justices rejected an argument from a Sri Lanka man who said he's entitled to a hearing after he was denied asylum. His attorneys cited a guarantee in the U.S. Constitution against unlawful detention.

After his application for asylum was denied, Vijayakumar Thuraissigiam was designated for a fast-tracked deportation under an expedited review system and he sought a court hearing to stop it.

The high court ruling reverses a decision by the U.S. Court of Appeals for the 9th Circuit, which found the procedures violated migrants' constitutional rights.

"If courts must review credible-fear claims that in the eyes of immigration officials and an immigration judge do not meet the low bar for such claims, expedited removal would augment the burdens on that system," Justice Samuel Alito wrote for the majority.

"The court thus purges an entire class of legal challenges to executive detention from habeas review, circumscribing that foundational and 'stable bulwark of our liberties,'" Sotomayor wrote. "By self-imposing this limitation on habeas relief in the absence of a congressional suspension, the court abdicates its constitutional duty and rejects precedent extending to the foundations of our common law."

"This ruling fails to live up to the Constitution's bedrock principle that individuals deprived of their liberty have their day in court, and this includes asylum seekers," answered attorney Lee Gelernt of the American Civil Liberties Union, who represented Thuraissigiam.

"This decision means that some people facing flawed deportation orders can be forcibly removed with no judicial oversight, putting their lives in grave danger."

A member of Sri Lanka's minority Tamil ethnic group, Thuraissigiam says he will be subject to persecution if he's returned to his home country.

The Department of Homeland Security broadened the expedited reviews last year to include refugees apprehended anywhere in the United States who haven't been a continuous U.S. resident for at least two years.

The Trump administration has sought to accelerate the removals of thousands of refugees without granting them court hearings. Thousands of migrants are removed each year under the system, often within days of arrival. It was first established by Congress in 1996.

Migrants in Mexico: Journey to the U.S. border 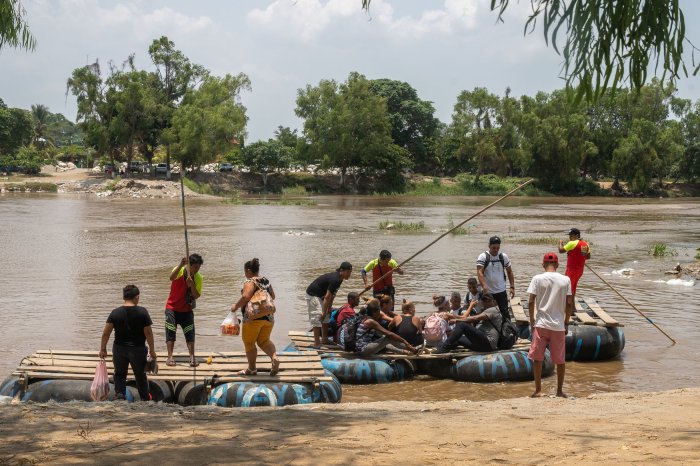 Migrants ride an inflatable raft on the Suchiate River from Tecun Uman, Guatemala, while a smuggler waits for their arrival in Ciudad Hidalgo, Mexico on Thursday. Photo by Ariana Drehsler/UPI | License Photo