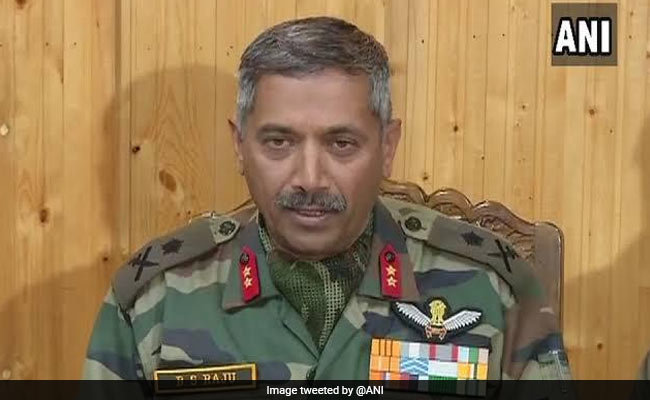 The people want a solution and want to get out of this cycle of violence: Lt General BS Raju

The recent "uncoordinated" acts of violence in North Kashmir are "signs of desperation" by terrorists and are not finding resonance among people who want to get out of the cycle of violence - a fact visible in the sharp dip this year in the recruitment of local youths in terror groups, a senior Army officer has said.

Lt General BS Raju, heading the Kashmir-based XV corps, feels the basic premise of terrorism in Jammu and Kashmir is to create sensationalism that is backed by false narratives and propaganda sponsored by Pakistan.

These acts of terrorism are "...not finding much favour amongst the awaam (public), these uncoordinated terrorist acts are a sign of desperation. There is no semblance of any space where terrorists are in control," Lt General Raju told PTI in an email interview.

"Overall, the people want a solution, they want to get out of this cycle of violence and that is the reason that the support for terrorism has been all but wiped out," he said.

Asked about the recent spurt of terrorist violence in North Kashmir in which the army and the CRPF lost their personnel, Lt General Raju said these attacks in no way indicate increased presence of terrorists.

"In fact, to the contrary, the recruitment of local youth in the terrorist outfits has also reduced by nearly half from 2018 to 2019 and is even lesser in 2020," he said, adding that the terrorist cadres "are in a self-preservation mode."

While the army refused to divulge the number of local youths who joined terror-based activities, Jammu and Kashmir police chief Dilbag Singh had earlier said that 218 local youths had joined terror outfits in 2018 but only 139 joined in 2019.

"The online registration for the upcoming recruitment rally has seen close to 10,000 youths registering, which is nearly double the numbers last year. Government has helped them build a better future for themselves and support their families and this fact is a testament to the change being ushered in Kashmir," he said.

Lt General Raju said one should not read much into increased number of terror acts in North Kashmir and said the dynamic nature of terrorism and the ability to change locations or tactics as per the pressure of the security forces is a common characteristic worldwide.

"Our counter infiltration and counter terrorism grids have inherent flexibility to adapt themselves to these dynamic shifts," he said.

He said the other factor worth tnoting is that Pakistan always wants to disrupt normalcy in the Kashmir valley through its actions.

"Pakistan's persistence in infiltrating terrorists, proliferating false propaganda is intended to disturb peace and its actions in fomenting trouble was well anticipated," he said.

The senior army officer said the spurt in terrorism is not in North Kashmir but restricted to the border districts and that is primarily due to the large number of infiltration attempts and terrorists wanting to create a base there to receive infiltrators.

"We are prepared for any contingency, in coordination with all stakeholders like the army, JK police, CAPF, intelligence agencies and the civil administration," Lt General Raju said.