The grounding of a container ship in the crucial waterway has blocked traffic, raising fears of crude oil supply disruptions.

Oil climbed as investors assessed the impact on global crude flows after a ship ran aground and blocked the Suez Canal, following a sell-off that’s driven prices to the lowest level since early February.

Futures in New York added 1% after news of the grounding, giving the market a reprieve amid mounting signs of weakness. Oil prices slumped below $60 a barrel on Tuesday and have tumbled more than 12% in less than two weeks on a series of factors including softening physical demand and the unwinding of long positions. The prompt timespread for global Brent crude has also flipped into a bearish structure for the first time since January. 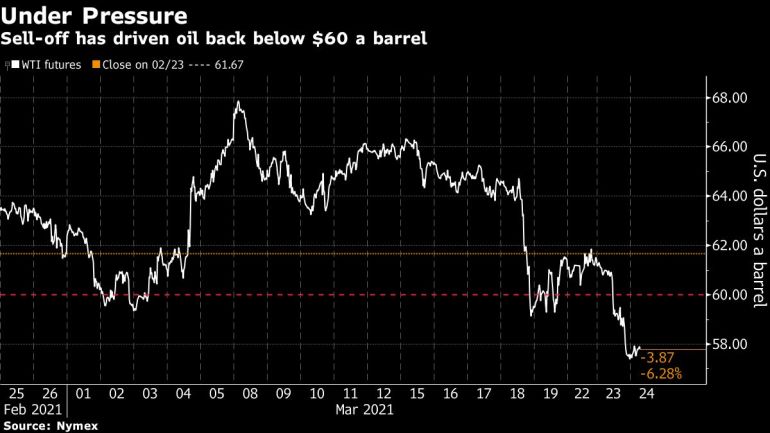 [Bloomberg]The recent plunge in oil may put pressure on OPEC+ to do more to try and stem the slide, with the group meeting next week to decide on its production policy for May. Despite the decline, crude is still up almost 20% this year, and as Covid-19 vaccinations accelerate worldwide, there is confidence greater mobility will boost fuel consumption in the longer term.

“Oil’s had a deep correction because of near-term demand, but the outlook that consumption will improve remains valid in the longer term,” said Will Sungchil Yun, a senior commodities analyst at VI Investment Corp. in Seoul. Price gains due to the Suez Canal blockage will be temporary, he added.

The prompt timespread for global benchmark Brent crude flipped to a bearish contango structure on Tuesday — where near-dated contracts are cheaper than later-dated ones. It was 3 cents in contango on Wednesday, compared with a bullish backwardation of 67 cents at the start of the month.

The Suez Canal is frequently used by tankers transporting crude from the world’s top exporters in the Middle East to customers across Europe and the U.S., and also by ships moving cargoes from the North Sea to Asia. The 400-meter long container ship Ever Given’s hull became wedged length-ways across the canal on Tuesday, causing a gridlock of at least 100 vessels.

“It could be having a bit of an impact when you consider about 10% of total seaborne oil trade goes through the Suez Canal, but I imagine any disruption would be very temporary,” said Warren Patterson, head of commodities strategy for ING Group in Singapore.