Diplomatic efforts on to secure release of tanker and crew amid tensions over $7bn in Iranian funds frozen in Korean banks due to US sanctions.

South Korea is sending a delegation to Iran to seek the release of a tanker seized in Gulf waters by Iranian forces, with a senior diplomat set to go ahead with a scheduled visit to Tehran on Sunday amid tensions over $7bn in Iranian funds frozen in Korean banks due to sanctions imposed by the United States.

“In the earliest possible time, a working-level delegation led by the regional director will be dispatched to Iran to try to resolve the issue on the ground through bilateral negotiations,” South Korea’s foreign ministry spokesman Choi Young-sam told a briefing in Seoul on Tuesday.

News of the visits came as South Korea’s foreign ministry called in the Iranian ambassador to Seoul for a meeting and urged the early release of the tanker and its crew of 20. It was carrying a cargo of more than 7,000 tonnes of ethanol when it was seized on Monday over what Iranian media said were pollution violations.

Asked about the status of the ship’s crew before his meeting at the Seoul foreign ministry, Iranian ambassador Saeed Badamchi Shabestari told reporters “all of them are safe”.

Meanwhile, an Iranian government spokesman on Tuesday rejected allegations that Iran’s seizure of the South Korean vessel amounted to hostage-taking. He said it was South Korea that was holding $7bn of Iran’s funds “hostage”.

“We’ve become used to such allegations … but if there is any hostage-taking, it is Korea’s government that is holding $7bn which belongs to us hostage on baseless grounds,” spokesman Ali Rabiei told reporters at a news conference streamed live online.

The incident came as Iran shows increasing signs of willingness to assert its claims in the region as US President-elect Joe Biden prepares to take office later this month, succeeding Donald Trump.

On Monday, Tehran also said it had resumed 20 percent uranium enrichment at its underground Fordow nuclear facility – a breach of a landmark nuclear deal Iran had signed with six world powers in 2015.

The US unilaterally withdrew from the pact in 2018, with the Trump administration reimposing crippling sanctions on Iran as part of its “maximum pressure” policy. 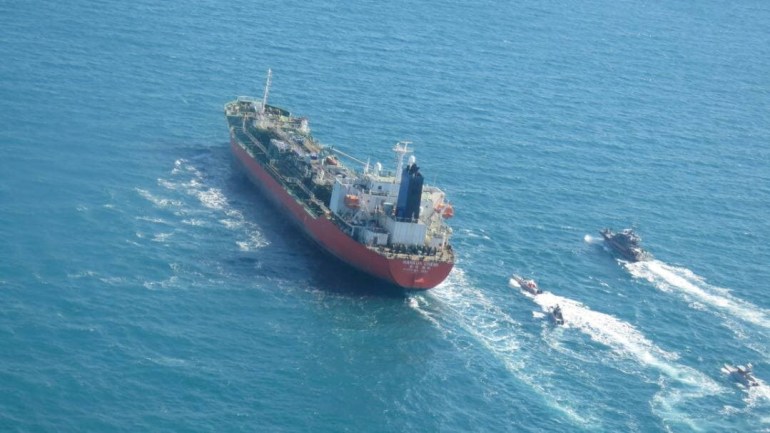 The South Korean-flagged tanker seized by Iran is seen in the Gulf [IRGC/WANA via Reuters]The ship’s Busan-based operator, Taikun Shipping Co Ltd, told Reuters news agency there was nothing to indicate before the seizure of the vessel that Iranian authorities were probing possible violations of environmental rules.

“If it really was marine pollution, as they [Iranian media] say, the coast guard was supposed to approach the ship first,” Taikun’s management director Lee Chun-hee said by telephone.

“But instead, armed soldiers approached the crew and said they needed to be investigated.”

South Korea’s foreign minister Kang Kyung-wha said on Tuesday she was making diplomatic efforts to secure the release the tanker and that she had made contact with her counterpart in Tehran, the Yonhap news agency reported.

Tilak Doshi, a visiting senior fellow at Middle East Institute, National University Singapore said the incident provided an example of Iran’s willingness to flex its muscle as Joe Biden prepares to take office, and that the frozen assets would likely be raised in talks with Seoul.

“No doubt, in negotiations for the release of the tanker and its crew, release of the funds by South Korea will be the key demand on the Iranian side,” he said.

Last Sunday, the Tehran Times newspaper reported that Iran was hoping to negotiate an agreement to use the frozen funds to “barter” for vaccine doses in the fight against the global coronavirus pandemic and other commodities.

According to Yonhap, a foreign ministry official said the Iranian government had tried to secure vaccines through the global COVAX initiative, backed by the World Health Organization.

Tehran had been in talks with the ministry and the US Treasury to pay for the doses with South Korean won, Yonhap said, citing a source in the ministry.