Sneakers, California sun and my mother’s other daughter

It is late on a Tuesday that is almost a Wednesday. The kids are finally asleep in their beds, while I fidget in mine. The whole house is quiet except for the clicking from the refrigerator that was purchased in 1984 by the first owners of our house. It will die soon. Frozen foods do not freeze. The clicking has turned almost guttural as the appliance tries to hang on. I am sure I can find a holiday sale and get a bargain. I add it to my list of things to do, the one that floats through my head on an almost constant loop.

Two years ago, my husband started a new job. It is commission only. We live differently from month to month, struggling more or less depending on his appointments and his sales, but always the instability remains. Lying back, I try to breathe. Inhale – one, two, three. Exhale – one, two, three. We are in our 40s and have four kids, student loans and a mortgage. As he rolls over next to me and snores, my phone screen glows from underneath the sheet.

When things get bad, as they are now – I look at houses in Southern California. On the real estate site, I narrow down my parameters, choosing the towns, the number of bedrooms and the minimum and maximum I am willing to pay, which in truth is nothing. Just before going to bed, I reviewed our monthly budget. We paid the mortgage late. We could lose the house, I think, as I wait for my results. Within moments, my search turns up ranches in Reseda with their side-facing driveways, a crop of contemporaries in Calabasas, all straight lines and shining chrome, and a smattering of unattainable mansions in Beverly Hills with square footage and price tags beyond comprehension. 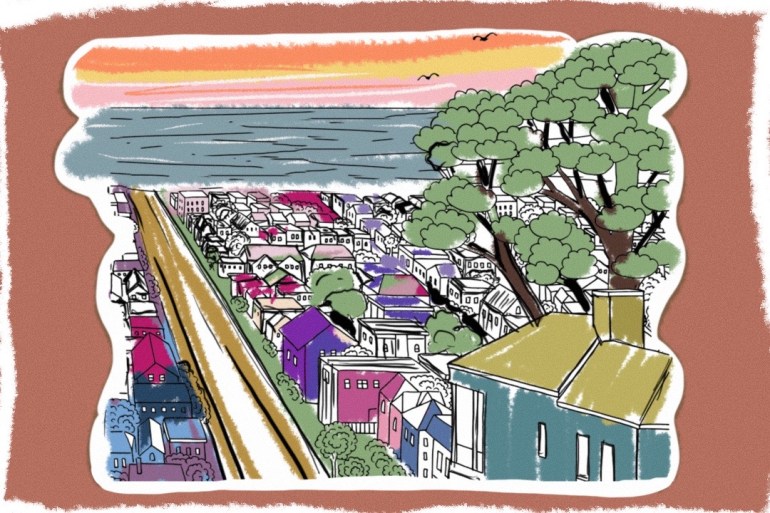 [Jawahir Al Naimi/Al Jazeera]We have a long history – me and this place that feels like it is a million miles away. I thought I would end up in California as my mother had in the 70s when she ran off to chase a drug addiction or, perhaps, kick it. No one is sure. In the 1960s, my grandmother sought refuge in the Golden State too, dragging my mother with her for a new life with a new man. She returned single to her parents’ home before marrying for a third and final time. My mother’s fate was not as pleasant.

As I think of their lives and my own, I stare at the leaking ceiling and the chipped floor in my dormered cape in Maine. For eight months out of the year, I navigate the cold Northeasterner winters, trudging through the snow with my ducklings trailing behind me, raking a roof to prevent ice dams, and feeling a sense of dread every year as the last leaf weaves its way towards the soon-to-be frozen ground.

When my mother ran to a sunnier land, she settled not in a house, but in an apartment in Van Nuys. From the pictures she had sent home to me and my brother, who wound up living days with a foster mother, and nights and weekends with our grandmother, I knew her complex had a pool surrounded by pale concrete. There were rumours that the Hell’s Angels chased my mother because she witnessed a murder. It was not hard to believe that a drug addict might get caught up in such a thing. I never knew if it held any truth. What I knew, then and now, is that she disappeared to the other coast with her druggie, biker boyfriend, Eddie, and his kid, Sarah.

While I think of California often, especially in times of trouble, I have not thought of Sarah in ages. I did not know much about her. I never knew if she had a mother, though I suppose that information would not have mattered because, for a time, she had mine. She lived on my coast, at least the one I wanted to be mine, with my mother. They looked at my ocean, lived my dream. Sarah was the me that I wished I could be. 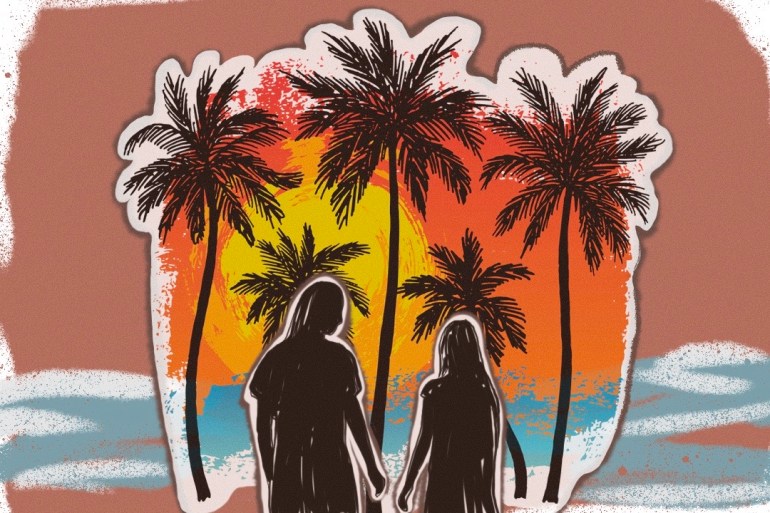 [Jawahir Al Naimi/Al Jazeera]On occasion, my mother sent me pictures from the girl I came to imagine as the half-sister I did not really want or like, the one who was not related to me by blood or bone or anything tangible, but rather through a thin thread I imagined stretched invisibly from one coast to another. The crayon-drawn pictures scribbled out on the bottom of construction paper always had a flower or a sun-filled sky and her name written across the bottom – Sarah, with an ‘h’.

“I hope you like the sneakers,” my mother wrote on the inside of the Holly Hobbie cards in messy, rushed strokes. “Sarah picked them out.” I thought perhaps she had worn my sneakers to gym class or for a walk along the beach as the waves crashed to meet them. Maybe trying them out before sending them off to me in the mail seemed thoughtful, though I never thought so. When I placed them on my feet, they felt stretched out. They were wider than I expected. My mother got the size right but the width was wrong. My feet were narrow. While I was pleased to have a present for my birthday, I realised my mother bought them using Sarah’s foot to measure, not mine.

I vowed to find Sarah, one day. I imagined running into her – both wearing the same high-heeled, strapped black and white sneakers. We would smile. I would thank her for the gift, as I seethed with envy that she bought them with my mother – the two of them holding swinging hands as they walked through the outside mall just down the street from where they lived. 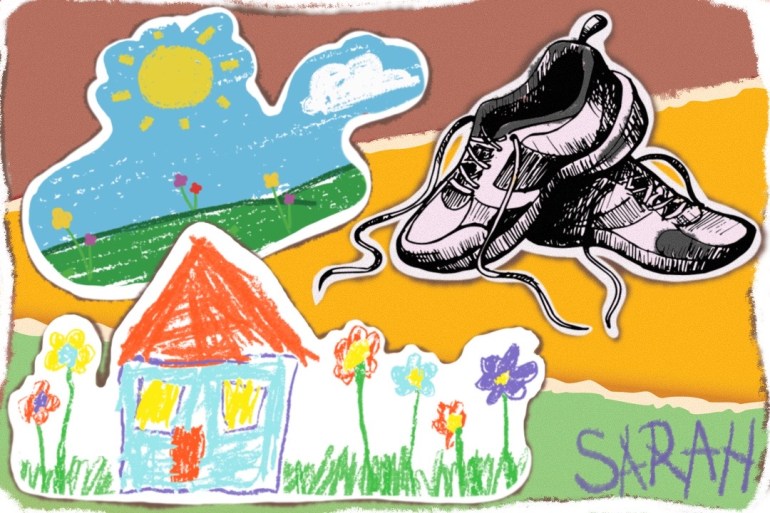 [Jawahir Al Naimi/Al Jazeera]One night on the news, circa 1981, we watched the mudslides in Los Angeles. Mud cascaded down onto highways wedged between the ocean and the sides of mountains blasted from rock. I imagined my mother caught underwater and dirt and rock as she was washed into the ocean clutching Sarah, telling her to swim, to hold on, to breathe, and to fight. A wave pulled them under and with them my dreams of reconciliation. The next day, the phone call came from my mother. My grandmother held the yellow receiver to her ear. “Denise is fine,” she yelled towards the living room.

My mother did not die in a mudslide but in a shower – in Van Nuys. Maybe Eddie shaved or watched television as my mother seized and drowned, a shampoo bottle covering the drain. I wondered if she had called out. I tried to imagine her voice. Even now, lying across the hall from my own children, I find it impossible.

After my mother’s death, Sarah disappeared. She and Eddie did not show up on our coast for the funeral.

I wondered if Sarah was nearby when they found my mother’s body. I wondered how she could have forgotten me when we shared so much – sneakers and a mother. I imagined Eddie packing my mother’s things in a manila envelope the size of the Dr Seuss book my grandmother read to me at night. Did he keep anything of hers?

I thought of the phone call that came in while I sat with my brother, the pea-coloured carpet leaving waffle-mark on our elbows, indentations from trying to hold our heads up to watch television. My grandmother let out a long cry and sank to the floor. My grandfather took the phone using one hand to hold it and the other to hold his wife. I was sure it was Eddie on the other end.

I pictured Sarah saying goodbye as she watched the coroner zip the vinyl bag that held our mother. Because maybe she was there. Because of course, there was a coroner. And maybe even flashing lights and police officers. My mother’s was an untimely and unexpected death at 30 years old. Perhaps the Hell’s Angels got her.

And there were questions. Had Eddie flushed the drugs or simply stashed them out of view? Would he go to the rehab where they would be expecting my mother the following week? Maybe he would take her place. Maybe he would get clean. Maybe her death would wake him up so he would be the father Sarah needed, and the mother.

I wondered who found my mother. Had they covered her body in a frantic rush, perhaps pulling down the shower curtain to use? I wondered if the coroner forwarded her body along to the mortuary. No, I am sure she was shipped home in a box – still intact, still my grandmother’s daughter and Sarah’s mother, still more hers than mine. Not a pile of ash – not yet. That came upon landing. 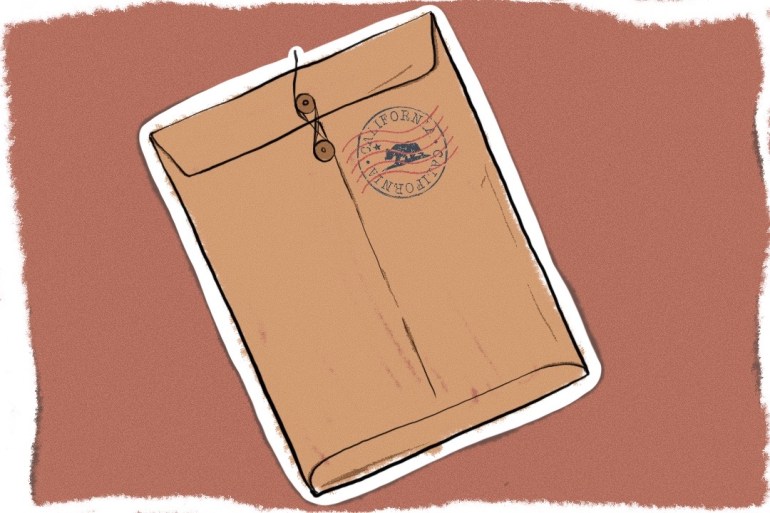 [Jawahir Al Naimi/Al Jazeera]I never saw her. Not once. Not that I remember. She left when I was so young.

I did have a foster mother who loved me as much as she loved her own children. We did not share biology though. My mother was and is an image, a wonder, another little girl’s mother. A pair of shoes mildewing in the basement.

I dream of California often. I search, as I am now during the most difficult times in my life. The more I struggle, the more I long for the place that was both the salve and the end for my mother. Perhaps I will find a house along the coast and sell mine. I will run there like my mother did, but I will bring my children and outrun the constant worries – my husband’s midlife career change, our financial trouble, my need to protect my children from all of it. Maybe I will meet my mother’s other daughter. Maybe Sarah still walks on palm-tree-lined sidewalks. Maybe she will remember the girl whose sneakers she tried on and whose mother she borrowed – at least for a while.

While I scroll through the listings for houses I know I will never own, I wonder if perhaps Sarah, whose last name was lost, lives in one of these places. I am searching for a way out, a simpler route as I stare bleary-eyed late into the night, under the covers, next to my sleeping husband. I am also searching for my sister who was never a sister at all. Perhaps she can tell me who my mother was and where I belong.