Six people have been arrested over the theft of a Banksy artwork from the Bataclan concert hall in Paris.

The mural by the British street artist was found at a farmhouse in central Italy earlier this month - nearly 18 months after it was taken.

A judicial source said two of those arrested were under formal investigation on suspicion of theft, while the other four were suspected of concealing theft. 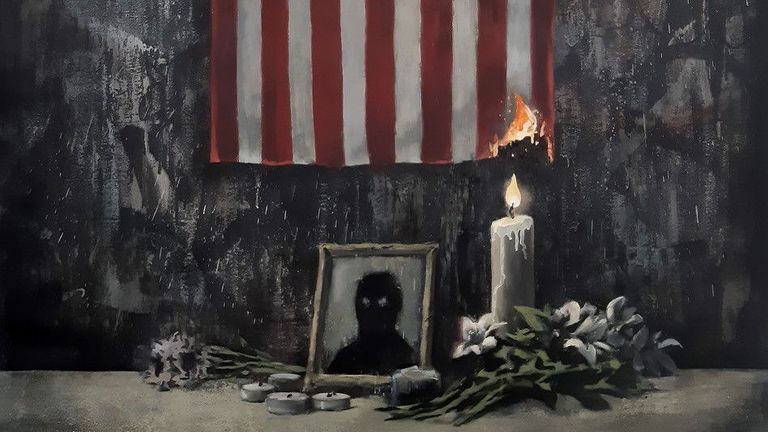 Image: Banky's latest artwork, which was inspired by the killing of George Floyd

Thieves are believed to have used portable grinders to remove the fire-exit door on which the mural was painted.

Italian media reported that they then used a van to transport the artwork, which shows a veiled female figure staring mournfully downwards.

One of Paris' best-known rock venues, the Bataclan was stormed by militants during a concert in November 2015 as part of coordinated attacks around the city, which left 130 people dead.

Staff described Banksy's work as a "symbol of recollection" and expressed their profound sadness when it was taken.

The street artist, who chooses not to reveal his real identity, recently unveiled a new image inspired by the death of George Floyd in Minneoapolis, USA.

It shows the scene of a vigil with a candle setting the American flag on fire and was posted with the caption: "At first I thought I should just shut up and listen to black people about this issue. But why would I do that? It's not their problem, it's mine."