Ousmane Sonko has denied wrongdoing and says accusations against him are politically motivated.

Police have clashed with protesters in several neighbourhoods of the Senegalese capital Dakar, including in front of a courthouse where an opposition leader made his first appearance since his arrest on a rape charge.

A lawyer for Ousmane Sonko said he was being charged with rape and making threats, allegations that have led to clashes since his arrest on Wednesday between his supporters and police in several towns, with at least one person reported killed.

Sonko, a 46-year-old tax inspector with a strong following among the youth, has denied wrongdoing and says accusations against him are part of a pattern by the authorities of using criminal charges to block opponents from standing in elections.

Authorities have responded to the protests by curbing access to the internet and suspending broadcasting by two private TV channels that covered the protests. On Friday they also banned motorcycles and mopeds, popular among Sonko’s young political base, from the streets of the capital. 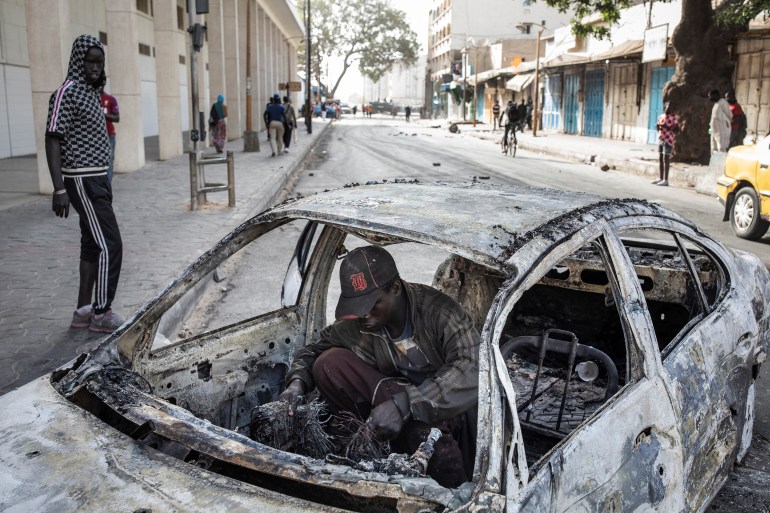 A man takes out cable from a burned car left after protestersreached the central business district in Dakar [John Wessels/AFP]Al Jazeera’s Nicolas Haque, reporting from Dakar, said: “We have military that have been deployed in key strategic locations, specifically those that lead to the presidential palace.

“The challenge ahead for the security forces to prevent any type of looting that we saw late last night where protesters attacked supermarkets, gas stations and also ATM machine trying to get cash,” he added.

Internet monitor NetBlocks said social media and messaging apps including Facebook, WhatsApp, and YouTube were restricted early on Friday. Bracing for violence, some schools and shops were shut.

Police in full protective gear guarded the court in Dakar as Sonko appeared before a judge. The hearing will continue on Monday.

United Nations representative in the region Mohamed Ibn Chambas in a statement on Friday called for restraint and calm, and urged the Senegalese government to “take the necessary measures to ease tensions.”

An employee of a beauty salon accused Sonko last month of raping her. He says the case was trumped up to undermine him. Parliament stripped him of his immunity as a legislator last week.

The opposition fears the case is an attempt by Sall to remove a potentially popular rival if he decides to seek a third term in 2024.

Other rivals have been targeted by criminal charges in the past, including former Dakar Mayor Khalifa Sall and Karim Wade, the son of former President Abdoulaye Wade, eliminating them from the 2019 presidential race.

The government denies the political motivations behind the case. Sall, 59, in power since 2012, has not commented on reports he might seek a third term despite a constitutional two-term limit.

Rights Group Amnesty International expressed concern over the authorities’ handling of the situation, citing a wave of arrests, the use of live weapons and the suspension of the broadcasters.

“We call on the Senegalese authorities to respect the freedom of peaceful assembly throughout the country,” Amnesty’s regional director Samira Daoud said in a statement.