Scuffles in Yangon as Facebook bans all Myanmar military accounts

Scuffles broke out between opponents and supporters of Myanmar’s coup on Thursday, as Facebook took down all accounts linked to the country’s military and banned advertisements from military-controlled companies on its platforms.

Pro-military demonstrators rallying in Yangon, the country’s biggest city, punched several bystanders, according to local media, after anti-coup demonstrators and residents banged pots and pans and crossed their wrists to express their disapproval of the rally.

One man also threw a rock at a photographer from Frontier Myanmar magazine, slightly injuring him, according to the publication.

Myanmar’s military, known as the Tatmadaw, seized power on February 1 alleging fraud in an election last November that returned Aung San Suu Kyi’s National League for Democracy (NLD) to power for a second term. The power grab has prompted daily protests across the country, with tens of thousands taking to the streets to demand an end to military rule as well as the release of Aung San Suu Kyi and other detained leaders.

Thursday’s rally by pro-Tatmadaw supporters was the “first sizeable pro-military demonstration” in Yangon, Myanmar’s largest city, according to Frontier Myanmar. About 1,000 people joined in the march, the Reuters news agency said.

Some military supporters were photographed with clubs and knives. Some threw stones and fired catapults, while video footage showed several apparent supporters of the military, one wielding a knife, attacking a man outside a city-centre hotel.

Emergency workers helped the man as he lay on the pavement after his attackers moved off but his condition was not known.

Opponents of the coup, meanwhile, said they plan to hold new protests on Thursday, with students urging protesters to bring textbooks promoting military education so they can destroy them at the gathering. Doctors were also due to hold a rally.

“Since the coup our lives have become hopeless, our dreams have died,” Kaung Sat Wai told Reuters outside a university campus in the main city of Yangon. “We don’t accept an education system that supports dictatorship,” the 25-year-old added.

But police blocked the gates of the campus, stopping hundreds of students inside from coming out to march.

While the mass anti-coup demonstrations have largely been peaceful, at least three protesters and one policeman have been killed in violence at the rallies.

Facebook on Thursday said its decision to ban the Tatmadaw came due to “exceptionally severe human rights abuses and the clear risk of future military-initiated violence in Myanmar”.

“Events since the February 1 coup, including deadly violence, have precipitated a need for this ban,” the social media company said in a blog post. “We believe the risks of allowing the Tatmadaw on Facebook and Instagram are too great.”

On the diplomatic front, Japan’s Asahi Shimbun daily said the Japanese government was finalising plans to halt new development aid to Myanmar, but would refrain from calling the suspension of Official Development Assistance a “sanction”. Citing multiple government sources, the daily said the government would also try to persuade the military to reach a democratic solution through dialogue.

However, Japan’s Chief Cabinet Secretary Katsunobu Kato said “there was no truth to the report,” but left open the possibility of a change in policy.

The coup has prompted widespread international condemnation, including selected sanctions on Myanmar’s generals from the United States, United Kingdom, Canada and New Zealand.

In a virtual news conference after her return to Indonesia, Marsudi said she expressed her country’s concern about the situation in Myanmar and emphasised the need for dialogue, reconciliation and trust-building.

“We asked all parties to exercise restraint and not use violence … to avoid casualties and bloodshed,” she said.

Indonesia’s intervention has raised suspicion among Myanmar democracy activists who fear dealing with the military would confer legitimacy on the regime and its bid to scrap the November election.

A Reuters report this week cited sources as saying Indonesia was proposing that Association of Southeast Asian Nations (ASEAN), of which Myanmar is a member, send monitors to ensure the generals stick to their promise of fair new elections.

The military has not given a time frame for fresh elections, although it imposed a one-year state of emergency when it seized power. 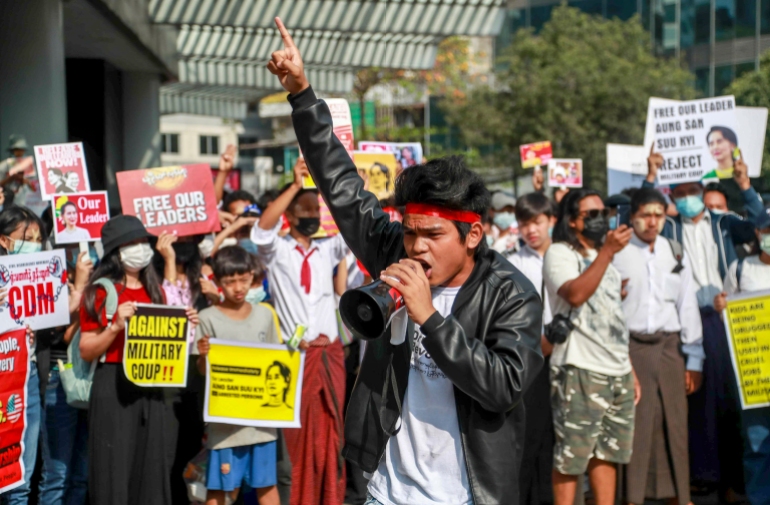 An anti-coup protester shouts slogans in Yangon, Myanmar Thursday, February 25, 2021 [AP]Dozens of protesters gathered outside the Thai embassy in Yangon on Wednesday with signs reading: “Respect our vote” and “We voted NLD”.

Retno did not mention the issue of the election but emphasised “the importance of an inclusive democratic transition process”.

ASEAN Parliamentarians for Human Rights (APHR) called on the regional bloc to do more to resolve the crisis in Myanmar.

“While we appreciate Indonesia’s efforts to convey an ASEAN meeting and its calls on the Myanmar junta to refrain from violence, ASEAN is still missing in action,” said Charles Santiago, a Malaysian legislator who heads the APHR.

“It is quite embarrassing that nearly a month since the coup, ASEAN foreign ministers have still not met to develop a coordinated response to a blatant violation of its Charter by the Myanmar military.”

Any effort by ASEAN and Indonesia must also be transparent, Santiago said in a statement.

“What does Indonesia mean when talking to ‘restore an inclusive democratic transition’ in Myanmar? There is only one thing to restore: this the duly elected Parliament that was meant to convene on 1 February. That is what the Myanmar people want and tell the world and the junta every day on the streets of Myanmar.”