Scientists have accidentally discovered a species of fungus-farming ant is growing its own body armour using biominerals, something never previously seen in insects.

Leaf-cutting ants are an extremely unusual evolution of the ant line, as they have - for the past 60 million years - co-evolved with the fungi that they cultivate for food.

A mature colony of some species of these ants is an effective superorganism, with potentially millions of ants divided into strict castes, sometimes four and sometimes seven, including gardeners and warriors.

As the colonies contain fungal crops and large broods of immature ants, they offer a rich nutritional resource for marauding ant species - including army ants. 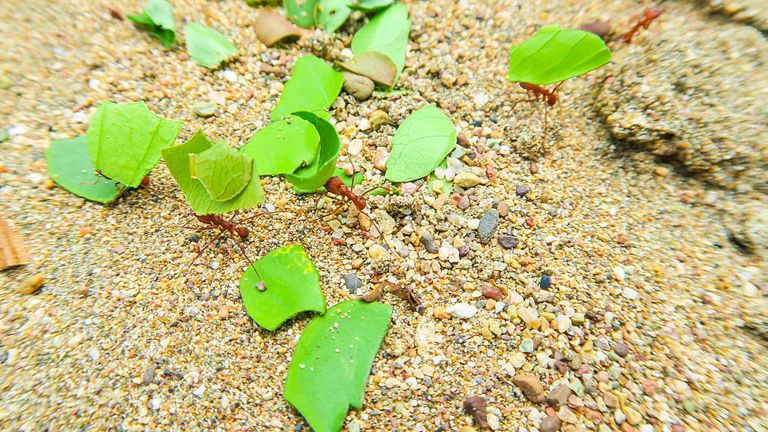 Image: Leaf-cutter ants have evolved alongside the fungus they farm

Scientists made a startling discovery while researching the relationship between the fungus-farming ant species and a bacteria which produces antibiotics that helps protect them and their crops from diseases.

According to the study published in the journal Nature Communications, the researchers found that many species of leaf-growing ants are covered in a mineral layer coating their exoskeleton, effectively providing them with body armour.

The researchers led by scientists from the University of Wisconsin-Madison found that this body armour was being produced by the ants themselves, developing as the ants mature.

Testing whether the biomineral armour actually helped them, the researchers put the ants into battles - replicating the territorial ant wars that occur relatively often in nature.

"Notably, biomineral armour is present in mature major workers, which forage outside of the nest, further indicating that epicuticular high-magnesium calcite is critical in a highly competitive environment," the researchers added.

They say that their results are "consistent with a role for epicuticular high-magnesium calcite as armour that defends workers from aggressive interactions with other ants, even though more ant species need to be further investigated".